A total of 29.1 million were affected by violence in 2019, with women, youth and black population as the main victims

In 2019, 29.1 million persons aged 18 and over experienced psychological, physical or sexual violence, in Brazil, according to the National Survey of Health 2019 – Accidents, Violence, Sexually-Transmitted Diseases, Sexual Life, Characteristics of Labor, and Social Support, released today (7), by the IBGE in partnership with the Ministry of Health. That figure corresponds to 18.3% of the residents in the country.

“There is a higher incidence of violence among persons in lower-income households. But a correlation between poverty and violence is not possible, since there are other aspects to consider, such as culture, sexism and racism,” says Flavia Vinhaes, analyst of the survey. 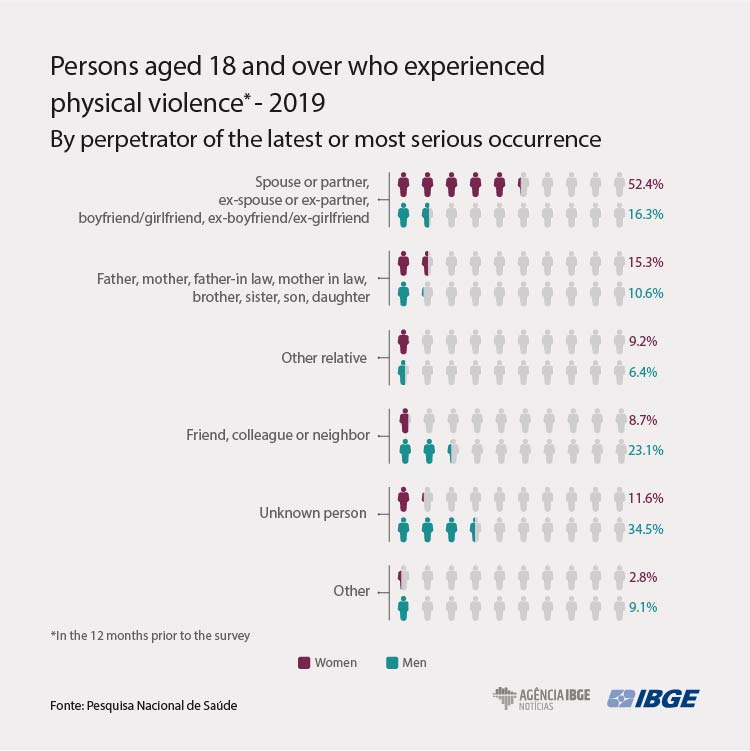 “The type of violent action and the location where it takes place are correlated information; as the one who perpetrates violence against women is the partner, ex-partner or relative, the household setting is usually where violence takes place. In the case of men, violence is highest out of the housing unit, although psychological violence against men is relatively high in the housing unit, ” says Leonardo Quesada, also a survey analyst. 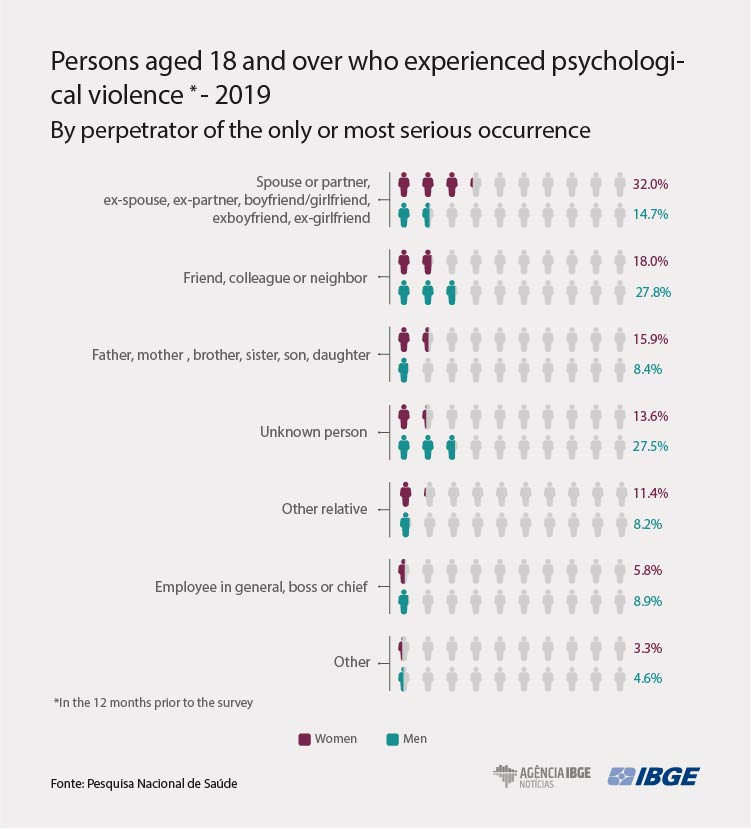 Victims of psychological violence correspond to 95.0% of the victims of at least one of the three types of violence 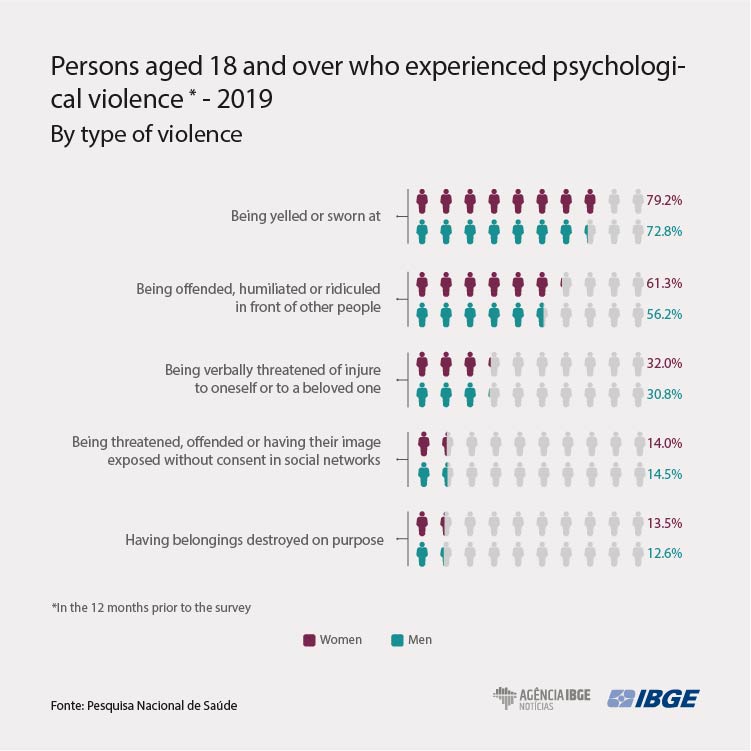 Against women, psychological violence was most commonly perpetrated by relatives or partners, either close or distant, including persons that were no longer in a relationship with the victim. In the case of male victims, perpetrators were often from out of the family circle.

Ex-spouses, ex-partners or ex-boyfriends/girlfriends are the main perpetrators of violence against women (32.0% versus 14.7% of men). In most cases that person is a male friend, colleague or neighbor of the victim, as mentioned in 27.8% (versus 18% of women); or an unknown person, as mentioned by 27.5% of the men (versus 13.6% of women).

For 55.3% of the women and 26.6% of the men, the household was mentioned as the location for the latest or most serious episode of violence. On the other hand, when considering the street of another public place, the percentage was of 27.6% for men and 15.4% for women. The same trend was identified in terms of psychological violence in the workplace, with 18.4% of the general answers: 13.2% of women and 25.2% of men.

Among both women and men, the most frequently reported type of violence was being pushed, held with force of having something thrown at in order to cause injury, 67.4% and 57.5%, respectively. In second place came being slapped (47.6% of women and 37.5%, of men) and, among them, was being threatened or injured with a knife, gun or another type of weapon or object (27.7% of women and 40.9% of men).

As in the case of psychological violence, the most commonly mentioned group of perpetrators of physical violence was the spouse, partner, or boyfriend/girlfriend (including former ones), with 35.9% of the answers, being 52.4% of women and 16.3% of men. That was the other way around in case the perpetrator is unknown (22.1%), as mentioned by 34.5% of the male victims and 11.6% of the female ones.

Almost 6% of the population has already experienced sexual violence

In 2019, an estimated 1.2 million persons were victims of sexual violence in the last 12 months preceding the survey; 72.7% of them were women (885 thousand). Youngsters and self-declared black persons were the ones experiencing most violence of the sexual type.

Similarly to what takes place in psychological and physical violence, the most often mentioned types of perpetrators were partners, ex-partners, or boyfriends/girlfriends, including ex-spouses), mentioned in 45.6% of the cases, being 533% for women and 25.3%, for men. Also mentioned were unknown persons, in 21.8% of the answers (26.3% of the men and 20.1% of the women).

Sexual violence also was also most frequent in the households of victims (52.3%), and, once again, that figure is prevalent among women, since 61.6% of them experienced that type of violence in the housing unit. Among men, that percentage stayed at 27.4%.

The survey also investigated if the person had ever been a victim of sexual violence – not only in the 12 months prior to the survey. It was estimated that 9.4 million persons aged 18 and over were victims of sexual violence, regardless of the reference period, which corresponds to 5.9% of this population, 2.5% of the men and 8.9% of the women.

Violence interrupted the activities of 3.5 million persons, but only 15.6% sought medical assistance

Violence can also be disabling. In Brazil, 3.5 million persons had to interrupt their daily activities as a result of having experienced violence of some kind, which amounts to 12.0% of the victims of psychological, physical or sexual. Once more, women (15.4%) were more affected than men (7.6%) as well as black persons (14.5%, versus 11.0% of white persons and 12.2% of brown ones) and those with an income of up to 1/4 of a minimum wage (20.0%, versus 8.8% of persons with per capita income of more than five minimum wages).

Among those who reported having had some type of consequence due to having experienced violence, 15.6% of the victims, or 2.3 million persons, sought medical assistance. The percentage of men was 13.2% and the percentage of women, 16.9%. By color or race, the percentages were 17.5% of White persons, 14.8% of brown persons and 13.4% of black persons.