Four out of every five persons aged 18 and over reported, in 2019, wearing a seat bel in the front seat when driving or as passengers of a car. That percentage, 79.7%, decreases when the back seat is considered: 54.6%. Data comes from the National Survey of Health 2019 – Accidents, Violence, Sexually-Tranmitted Diseases, Sexual Life, Characteristics of Labor and Social Support, released today (07) by the IBGE, in partnership with the Ministry of Health.

Although widespread in the country, the use of a seatbelt in the front seat varies significantly depending on the aspect analyzed. Men are more resistant to that measure: 77.7% reported always wearing it versus 81.5% of women. In terms of age, the difference is even bigger. Youngsters wearing the seat belt in the front seat make up the lowest percentage: 71.1% among persons aged 18 to 29. Considering persons aged 60 and over, the figure was 84.8%. The difference increases when location is considered. In the urban area, 82.6% reported adopting that measure, whereas in the urban area, only 61.1% did. 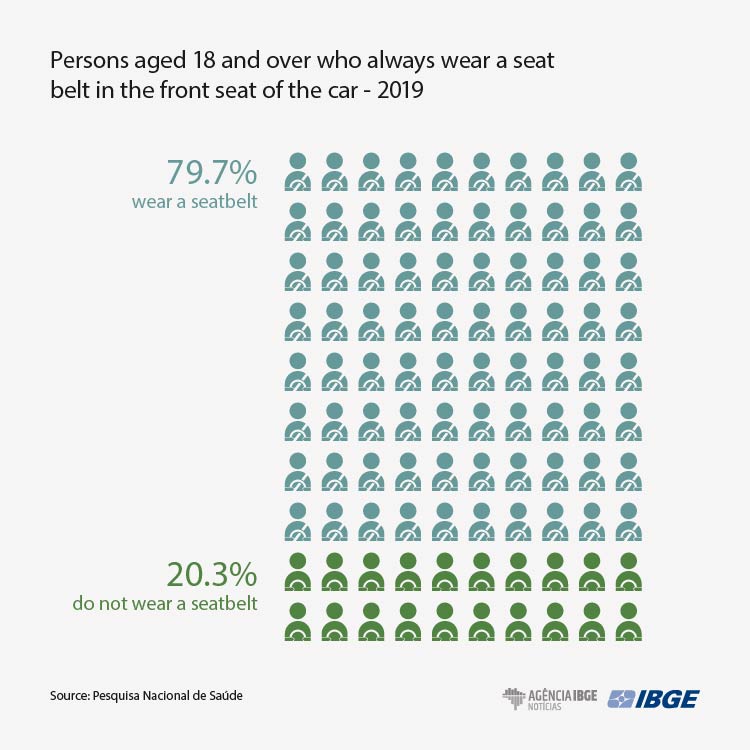 By area, the lowest indexes were recorded by the North (69.5%) and Northeast (69.7%), whereas the highest ones were those in the Southeast (85.4%), South (84.6%) and Central West (81.8%). “There has been consistent adherence to the idea of wearing a seat belt when in the front seat since the implementation of the Brazilian Traffic Code, in 1997, when use became compulsory. That habit has been part of people’s everyday life”, says Flávia Vinhaes, analyst of the survey, as she calls attention to differences between the several scopes of analysis.

The use of a belt in the back seat is less well-accepted. The index is even lower in the rural area (49.7% versus 55.4% in the urban area). Regional differences are also relevant: the lowest rate is that in the North (43.4%) and the highest, in the South (67.5%), a difference of more than 20 percentage points.

Fewer motorcyclists in the North and Northeast wear a helmet

The survey also shows that, among persons who rode motorcycles, 82.6% used to wear a helmet. The index is highest among persons with a higher level of schooling, and reaches 91.6% among those with higher education, whereas persons without instruction or with incomplete elementary education (74.4%) it is below the national average. Similarly to the use of a seat belt, there is a clear distinction concerning the habit of wearing a helmet among residents of rural areas (60.7%) compared to those of urban ones (89.2%). 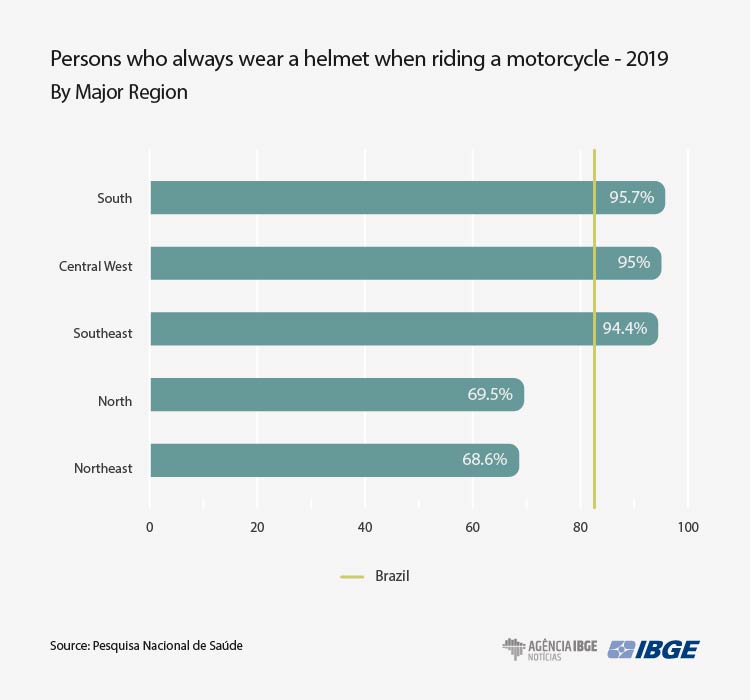 More than half (59.5%) of the accidents resulting in bodily injury involved persons riding a motorcycle, whereas cars accounted for 31.0% of the accidents. In 9.5% of the times, the accident involved other means of transportation, such as bicycles, buses of trucks.

In 2019, about 3.9 million persons, or 2.4% of the population, said they had suffered a traffic accident in the period of 12 months prior to the survey. In the North (3.4%) and in the Central West (3.2%) the percentage is above the national average.

Among persons involved in a car accident with bodily injury, almost half (48%) had to stop their daily activities. Other 60.6% needed some medical assistance after the accident, whereas 14.9% had permanent physical aftereffects as a result of the accident, being men the majority in this group (63.3% versus 36.7%).

"Traffic accidents are one of the main causes of death worldwide. So, they are a problem in public health. Lesions resulting from them cause sequelae like motor disability. It is vital that people use safety equipment in order to reduce such impacts, Ms. Vinhaes says. 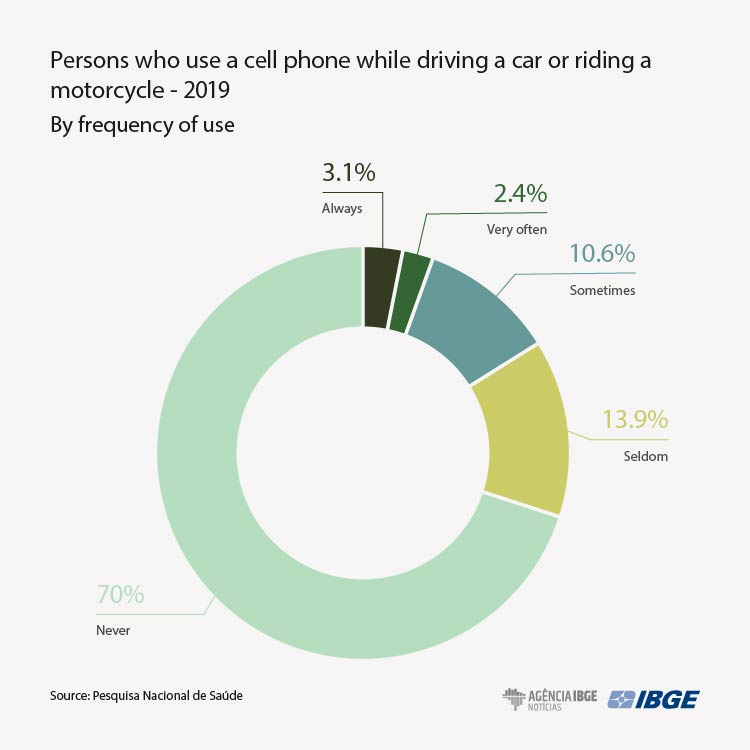 PNS 2019 also dealt with workplace safety and revealed that women were less involved in this type of accident. In 2019, about 2.6 million persons over 18 years of age, or 2.6% of the persons working in the week of reference, reported suffering some type of accident at work. Men were 68.7% and women, 31.3%. Among those 2.6 million persons, 48% interrupted their daily activities and 2.7% had permanent physical aftereffects as a result of the accident.