The presence of children up to three years of age in households is related to the lower work insertion of women. Employment-population ratio among employed persons in the working-age population is lower for women aged 25 to 49 who live in households with children in that age group: 54.6%, versus 67.2% in other households. Data comes from the study Gender Statistics: social indicators for women in Brazil, released today (4) by the IBGE.

“The presence of children that age group in the household reduces rhe level of employment of women. Such behavior suggests the existence of a proper supply of day care centers to contribute to the increase of women's employment in the labor market. Increased sharing of household tasks betwee men and women is another important factor for the expansion of female autonomy in the la bor market,” says André Simões, head of this study.

Employment population ratio among men is abive that among women in both cases: with or without children in the housing unit. When there is a comparison between men, employment population ratio increases with the presence of children. The proportion of men in the labor market is higher among men with children up to three years of age living in the household is higher (89.2%) than in the case of those do living in households without them (83.4%). 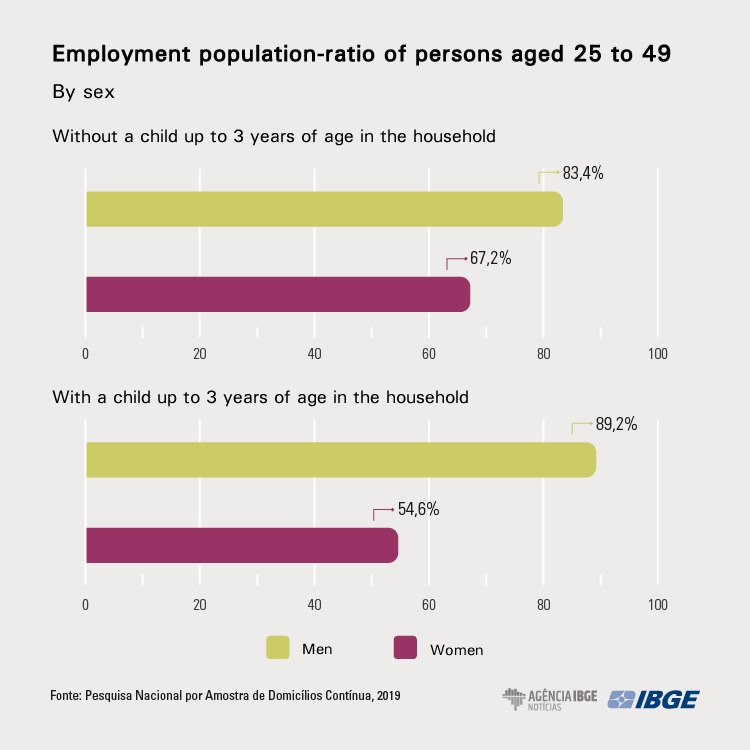 The study also shows there are still differences in the proportion of white and black and brown women in this indicator. Whereas the employment population ratio among black or brown women with children up to is 49.7%, that of white women the same age is 62.6%.

“In the case of black or brown women with children, employment population ratio was below 50%. A great difficulty faced by this population is not only related to access to the labor market, but also to access to educatio and health services. That is a structural matter in our society,” says the researcher. 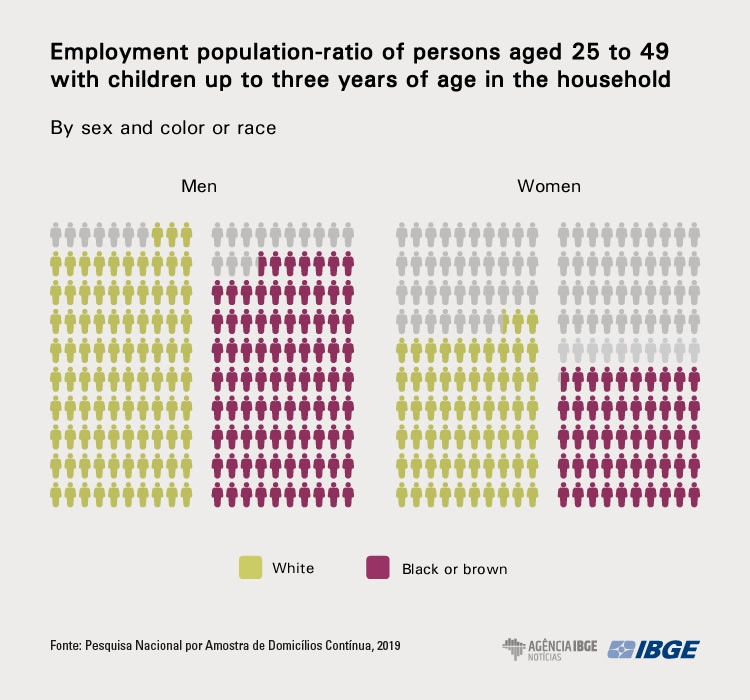 Another aspect approached by the study that explains the participation of women in the labor market is the increased participation in non-paid work. In 2019, women spent almost twice as much time as men to caring for persons and doing housework. They spent 21.4 hours per week on these activities versus 11 hours spent by men. 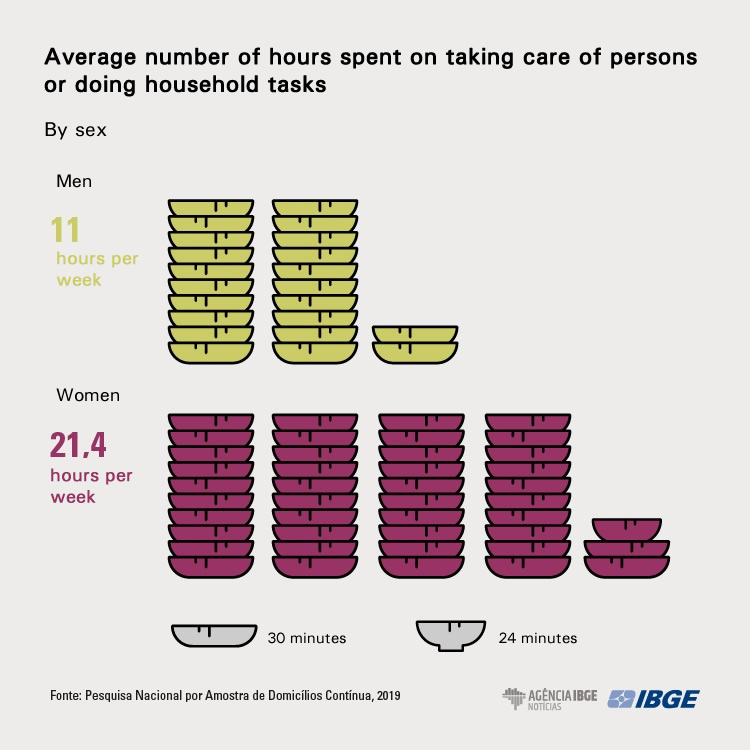 “That may be due to the greater probability of women with the highest earnings outsourcing domestic services, by hiring a person to help in the household, and also have children enrolled in a day care center. Women with lowest earnings, in turn, depend on public facilities, not always easily accessible. That has an effect on differences in terms of weekly hours to conduct such activities”, André Simões says.

29.6% of the employed women work part-time

The study indicates that more dedication to housework and caring for persons has a direct impact on the type of female participation in the labor market. Since women need to balance paid and non-paid work, they end up accepting to be employed in part-time positions. In 2019, about one third of women (29.6%) was employed part-time (up to 30 hours per week), almost twice as what was observed among men (15.6%).

In an analysis by color or race, black or brown women were the majority in terms of part-time work, accounting for 32.7% of the total, versus 26% of white women. The North (39.2%) and Northeast Region (37.5%) were the ones with the highest proportion of women employed part-time.

In 2019, women earned a little more than three-fourths of men's earnings (77,7%). Differences were bigger among persons participating in employment groups with highest earnings, such as management positions and professional in science and intellectual fields. In these groups, women earned, respectively, 61.9% and 63.6% of the amount men did.

In the South and Southeast, women earned, respectively, 74% and 72.8% of men's earnings. In the North (92.6%) and Northeast (86.5), areas where average earnings were lower for both sexes, with smaller differences.

Women receive more education, but are a minority among university professors

The study shows, by means of data from the 2019 Higher Education Census, that there are differences between men and women in terms of fields of knowledge. Only 13.3% of the enrollments in undergraduate programs in Computer Science and Information and Communication Technology were by women, whereas the field of Welfare, which includes programs such as Social Services, female participation was of 88.3%. Women are a majority in courses such as Law (55.2%) and Medicine (59.7%).

“Women have more access to higher education than men in Brazil and their participation is unevenly distributed by fields of knowledge. They are more often present in areas related to welfare and care and men, in the exact sciences field,” says BGE analyst Bruno Mandelli Perez.

Despite their bigger participation as higher education, women are still a minority as professors. In 2019, women were 46.8% of the teaching board of higher education institutions.

“In 2019, women still made up than 50% of professors in Brazil. However, compared to previous months, there was an increase. Women gradually increased their participation. From 2003 up to today, their participation increased by 3.6 percentage points, which is a very low increase in almost two decades.”