In the land and in the sea

From large works to prevention of disasters, get to know the functions of geodetic networks

Establishing coordinates for infrastructure works. Demarcating agricultural land. Detecting disturbances in the atmosphere that can interfere in the transmission of electricity. And even warning a tsunami in the South Atlantic. Do you know what these tasks have in common? They are streamlined by the IBGE through the Geodetic Permanent Tide Gauge Network - RMPG and the Brazilian Network for Continuous Monitoring of the GNSS Systems - RBMC.

The data are public and can be downloaded in files updated daily in the RBMC and RMPG. Reports providing technical details of the stations and historical information needed to use and process these data are also available to the public in both networks.

Altogether, the IBGE maintains six active tide gauge stations, located in the cities of Imbituba (SC), Arraial do Cabo (RJ), Salvador (BA), Fortaleza (CE), Belém (PA) and Santana (AP). Each one is equipped with two water level sensors to watch the variations of the sea level for climate studies and to bind the coastal altimetric systems to the official altitudes of the Brazilian Geodetic System.

The information produced by the RMPG stations are useful for a number of applications, like the reduction of surveyings for the conservation and improvement of the capacity of ports and waterways, implementation of infrastructure (ports, roads, water and sewage networks) in coastal regions and study of potential measures of adaptation and mitigation of the impacts of the global rise of the sea level.

At the international level, the RMPG contributes to the Global Sea Level Observing System and to the Caribbean Tsunami Warning Program of the Unesco Intergovernmental Oceanographic Commission, which lacked significant information from the South Atlantic.

"Every minute we have the water level record of the stations and every 5 minutes we send the information to the databases," explains Salomão Soares, IBGE´s manager of Vertical Networks. Data transmission is made either through telephone antenna or satellite. "Such duplicity is key to guarantee that this service is supplied to the society in case of problems in one of them," reminds the technician. What if the entire transmission fails? "In this case, we have a last resource: the memory card of the station, which records all the data," argues Soares.

Likewise, 150 stations of the Brazilian Network for Continuous Monitoring of the GNSS (Global Navigation Satellite System) work on a daily basis with data of satellite navigation. The configuration of each station is simply a geodetic marker (usually a cylindrical concrete structure) on top of which an antenna connected to a receiver is installed. It decodes the signals received by the antenna and transmits the data through the Internet. According to the statistics of use of the daily files, 600 thousand downloads, on average, are carried out per month. 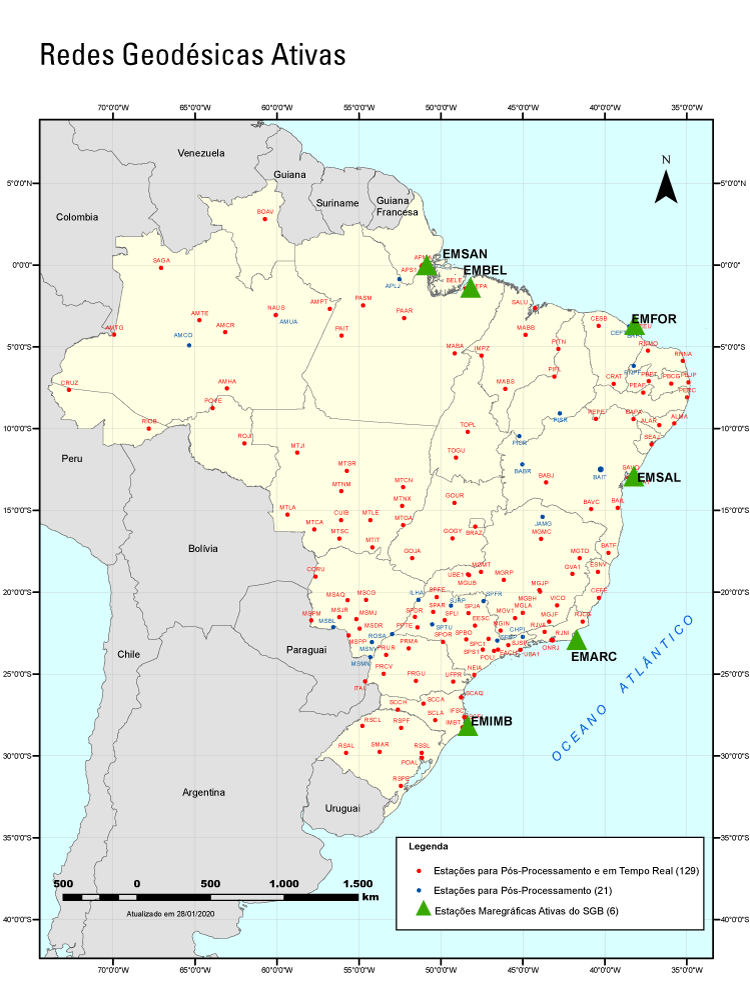 The information is used to establish the exact coordinates of latitude, longitude and altitude, key to applications like precision agriculture, atmospheric studies and land demarcation, among others. This network is the mostly used geodetic structure by professionals like topographers and engineers – who need its data to carry out geo-referencing works to support mapping and infrastructure works.

Besides subsidizing technical activities of the society, the RBMC is a reference for a number of scientific studies, like surveys on disturbances in the atmosphere (which affect the systems of transmission of electricity and communications), as well as it complements the analyses on the variation of the sea level in the Brazilian coast and on the vertical variations of the crust that take place in the Amazon region due to the load of water body, among other studies of geo-dynamics.

Most stations are equipped with receivers able to trace signals transmitted by satellites of the American navigation system (GPS), as well as of the Russian (GLONASS), European (Galileo) and Chinese (Beidou) systems. Nearly 20% of the stations also have meteorological sensors, which collect temperature, pressure and relative humidity every minute.

"We have a strategic project to improve and update the network," anticipates Sonia Maria Alves da Costa, IBGE´s manager of Geodesics. The project foresees the implementation of at least two new stations every year in most relevant population arrangements. "Our focus is to keep as much as possible the stations in operation and improve the network on an annual basis," completes Costa.

The operationalization of the networks and part of the station facilities are under the responsibility of the IBGE´s Coordination of Geodesics and Cartography and partnerships with universities and public and private institutions. For the first time ever, two reports on the network activities, compiling data from the last two decades, are scheduled to be published in December.

"The reports to assess and process historical data of the stations of the two networks will help a number of studies that depend on long-term analyses, which could not be done assessing only daily or monthly data," states Costa. "In addition, even more precise coordinates will be informed, which are important, for instance, to monitor dams," summarizes her.

What is the Brazilian Geodetic System

Like the coordination of the National Statistical System, the IBGE is also responsible for managing the Brazilian Geodetic System, according to Decree-Law no. 243 of 1967.