Child labor fell in 2019, but 1.8 million children were still living under such conditions

Data comes from Continuous PNAD on Child and Teenage Labor, which is part of the IBGE’s experimental statistics, released today (17), and that collects information on economic, subsistence, school and domestic activities in the national territory. The survey, on an experimental basis, is mainly focused on the adoption, in 2018, of Resolution IV of the 20th International Conference of Labor Statisticians – CIET.

“Decline in child labor was observed both in absolute terms and proportionally to the population; it was slightly higher for the population of young men and boys, than among women. Such decrease was already expected, since there are more boys than girls living in child labor conditions,” says the survey manager, Maria Lucia Vieira.

Child labor concentrated more persons of the male (66.4%) than the female sex (33.6%). The percentage of persons in child labor conditions was significantly lower (32.8%) to that of black and brown persons (66.1%).

Differences were also observed as for school attendance, since 96.6% of the population aged 5 to 17 was formed by students, whereas among child workers that estimate fell to 86.1%. 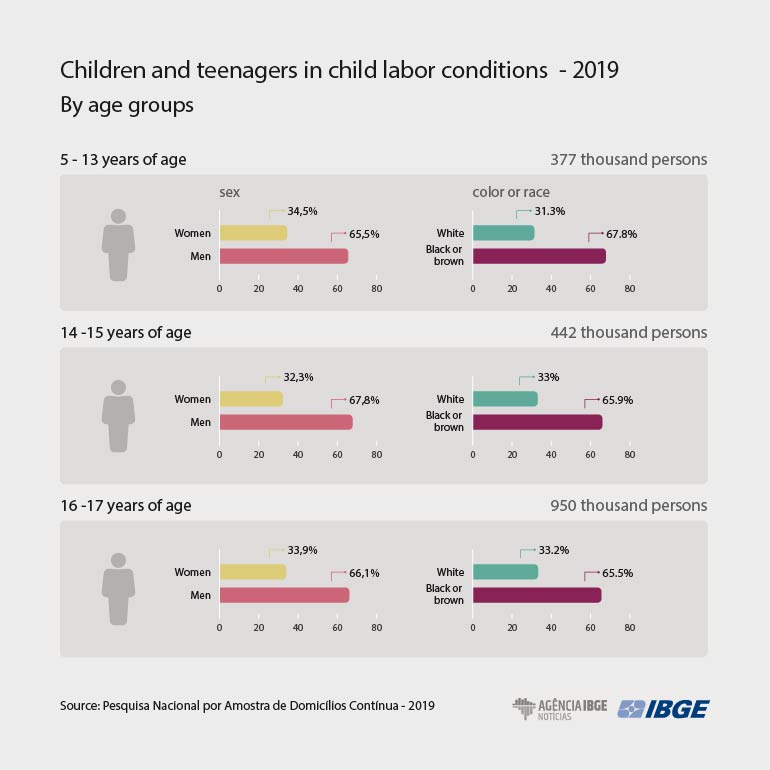 In 2019, the average real earnings of persons 5 to 17 in child labor conditions working in economic activities was estimated at R$ 503. In terms of data disaggregated by sex, men had earnings of R$ 524, whereas women received 87.9% of that amount (R$ 461). In terms of color or race, the average amount received by white children and teenagers was R$ 559, having fallen to R$ 467 among blacks and browns.

92.7 thousand children and youngsters worked as domestic workers and 722 thousand aged 16 and 17 were in informal activities

The total 1.3 million workers performing economic activities in child labor conditions was mainly concentrated in non-agricultural activities (75.8%). They worked as domestic workers (57.7%) and auxiliary household workers (30.9%). Domestic services accounted for 7.1%, that is, 92.7 thousand were engaged in this activity.

As for employment, persons in child labor conditions were, mainly, workers in the services sector, salespersons in trade or markets (29.0%) and workers in elementary occupations (36.2%).

In the age group of 16 to 17, total workers in informal occupations was estimated at 772 thousand persons, which means informality rate of 74.1% among those engaged in economic activities in this age group.

The survey also showed that, in 2019, there were 706 thousand persons aged 5 to 17 in occupations listed under the worst forms of child labor. To reach that figure, the list of Dangerous Child Labor was combined with the occupations listed in the PNAD questionnaire.

In the groups aged 5 to 13 and 14 and 15, more than half were in risk, with 65.1% and 54.4%, respectively. Whereas 20.6% of those engaged in economic activities were working in the agricultural segment, among those in dangerous child labor occupations that percentage doubled, and reached 41.9%. 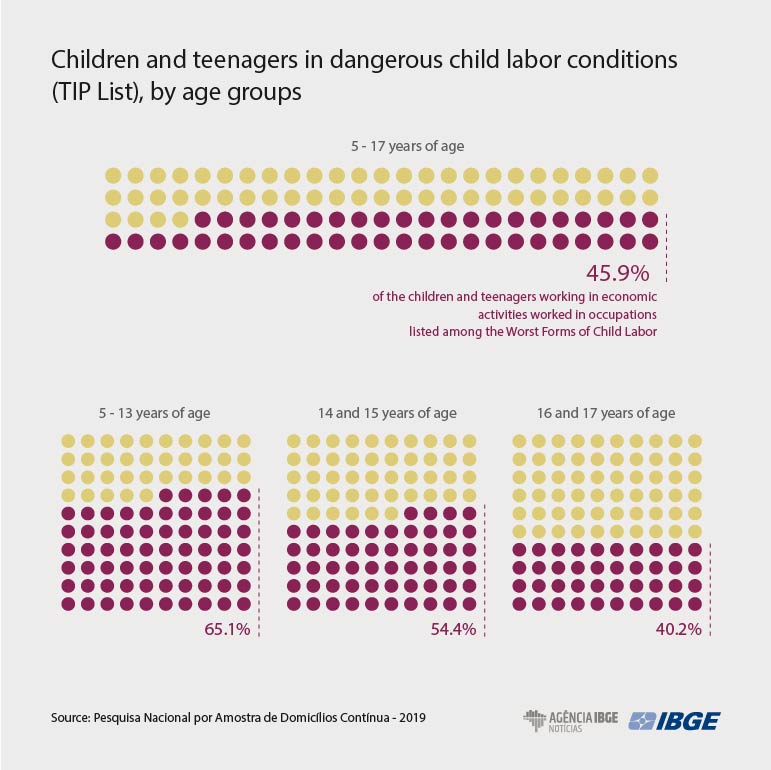 The TIP list includes 89 types of work in all the economic sectors and the respective occupational risks and consequences to health. For example, children working in sawmills, and are exposed to toxic metal powder, carbon monoxide, metal fragments, and accidents with machinery and equipment that may affect their lungs or cause cuts and traumas. Or children working in the collection, separation and processing of garbage, where they are exposed to intense physical efforts and serious physical, chemical and biological risks that may lead to deformities in the spine, respiratory infections, pyoderma and dehydration.

“Almost all persons doing household chores were students, but for those that work, besides doing those tasks, the percentage of those listed as students fell to 83.7%. That is, the fact that a person does or does not do household chores has no great impact on their status as a student as the fact of working,” Ms. Vieira adds.