Life expectancy of Brazilians increases 3 months and reaches 76.6 years in 2019

A person born in Brazil in 2019 was expected to live, on average, up to 76.6 years. Life expectancy increased 31.1 years since 1940. Women´s longevity is, on average, seven years above that of men.

This is some information from Complete Life Tables for Brazil related to 2019, released today (26) by the IBGE. Provided by the study, life expectancy is one of the parameters used to calculate the social security factor for retirement pensions under the General Social Security System.

Nevertheless, life expectancy changes with age and sex, being the mortality rate for men always higher than that for women. The so-called "male over-mortality" hits its peak at the age of 20 years. In 2019, a 20-year old man had 4.6 times more chance of not completing 25 years than a woman in the same age range. 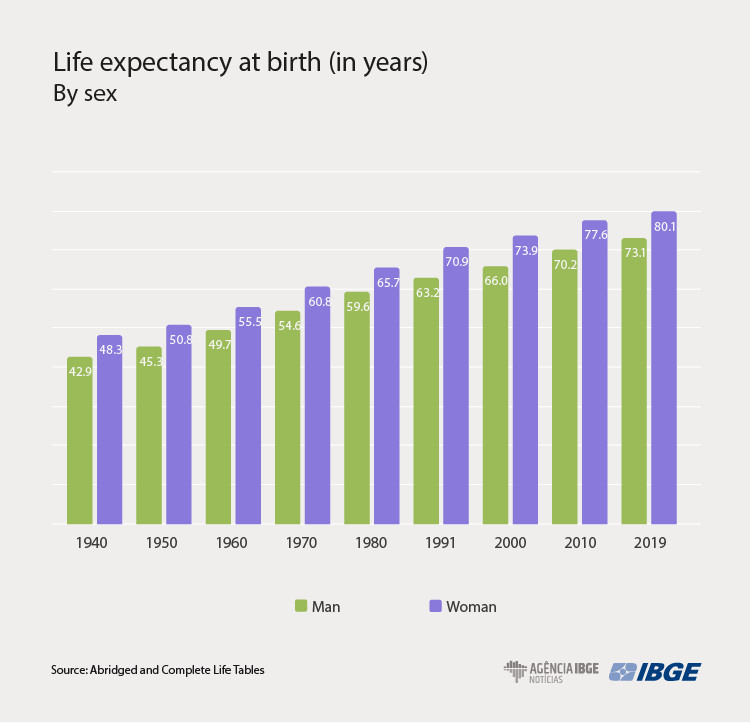 "The range between 15 and 34 years of age shows the highest gap between the mortality rate of the male population in relation to the female one. It happens due to the bigger occurrence of deaths by non-natural or external causes, like homicides and accidents that more intensively hit the young male population Male life expectancy in Brazil could be higher than that currently estimated, had not been the effect of the early deaths of youngsters due to non-natural causes," comments Fernando Albuquerque, an IBGE demographer.

As a whole, mortality declined in all the ranges over time. In 1940, the population aged 65 years and over represented 2.4% of the total and, in 2019, the percentage changed to 9.5%, pointing out that the Brazilians are living longer. A way to perceive this movement of longevity is by observing the probability of a 60-year old person to hit 80 years within the country.

"The decrease of the mortality in the older ages made the probabilities of survival between 60 and 80 years of age significantly increase between 1980 and 2019 in all the Federation Units, even more than doubling the survival chances between these two ages in some cases," highlights Fernando Albuquerque.

In 1980, from each thousand persons that reached 60 years, 344 reached 80 years of age. In 2019, that value changed to 604 individuals, on average, in Brazil. Nevertheless, not all the Federation Units stood out in this evolution.

In 2019, all the states of the South Region registered a percentage of 60-year old persons with a probability to reach 80 above the national average (604 per thousand). In the Southeast, Rio de Janeiro was the only state below that average (598 per thousand). 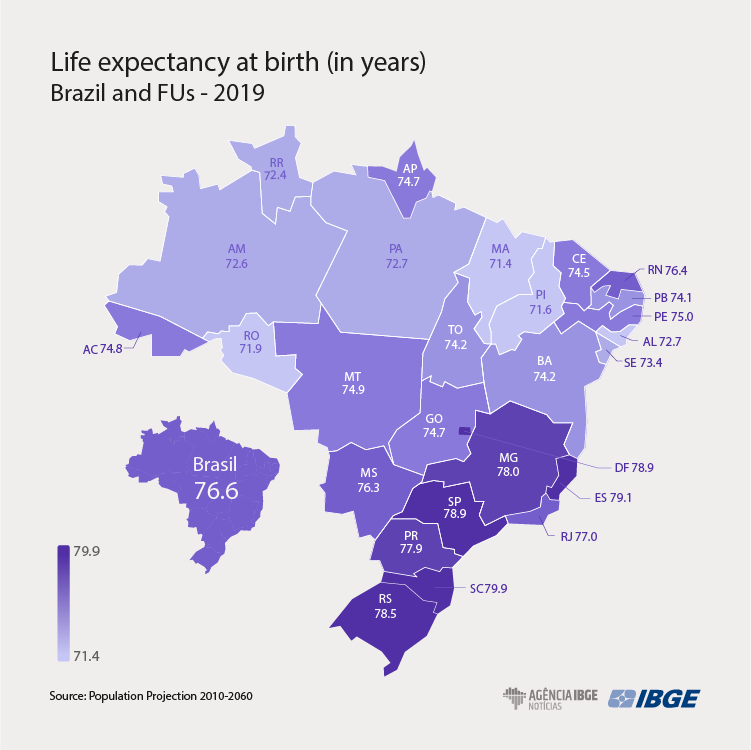 "The Brazilian average rates are still high compared with developed countries. In Sweden, for example, the mortality rate of children under 5 years is 2.5 per thousand. In Brazil, we have a rate of 2.0 per thousand for children aged between 1 and 4 years, when mortality is linked with economic and social factors, and of 11.9 per thousand before the first year of life, when deaths are more related to biological factors, adding up to 14.0 deaths per each thousand births before completing five years of age," explains researcher Fernando Albuquerque.

Espírito Santo is the Brazilian state with the lowest infant mortality rate (7.8 deaths per each thousand live births). Amapá has the highest index among the states (22.6 per thousand), reaching nearly the triple of deaths of ES.