About 30% of the persons with the lowest earnings in the country, between 2017 and 2018, lived on less than the amount they considered necessary to make ends meet throughout the month. That is evidenced in the Consumer Expenditure Survey (POF) – Profile of Spending in Brazil, released today (25), by the IBGE, which shows the average monthly disposable income of this part of the population was below the minimum income reported as necessary.

The proportion is inverted as income increases. In the last highest income range, where disposable income was R$ 6,294.83, persons considered that R$ 4,001.09 would be the minimum needed to make ends meet. That is, the 10% with the highest earnings reported needing 8.5 times that of those with the 10% lowest earnings (R$ 470.30) in order to make ends meet throughout the month.

“The amount one sees as minimum depends on their disposable income and, of course, on their consumption habits. Data shows people’s views on that change according to their income range,” Leonardo Oliveira, manager of the survey, explains. 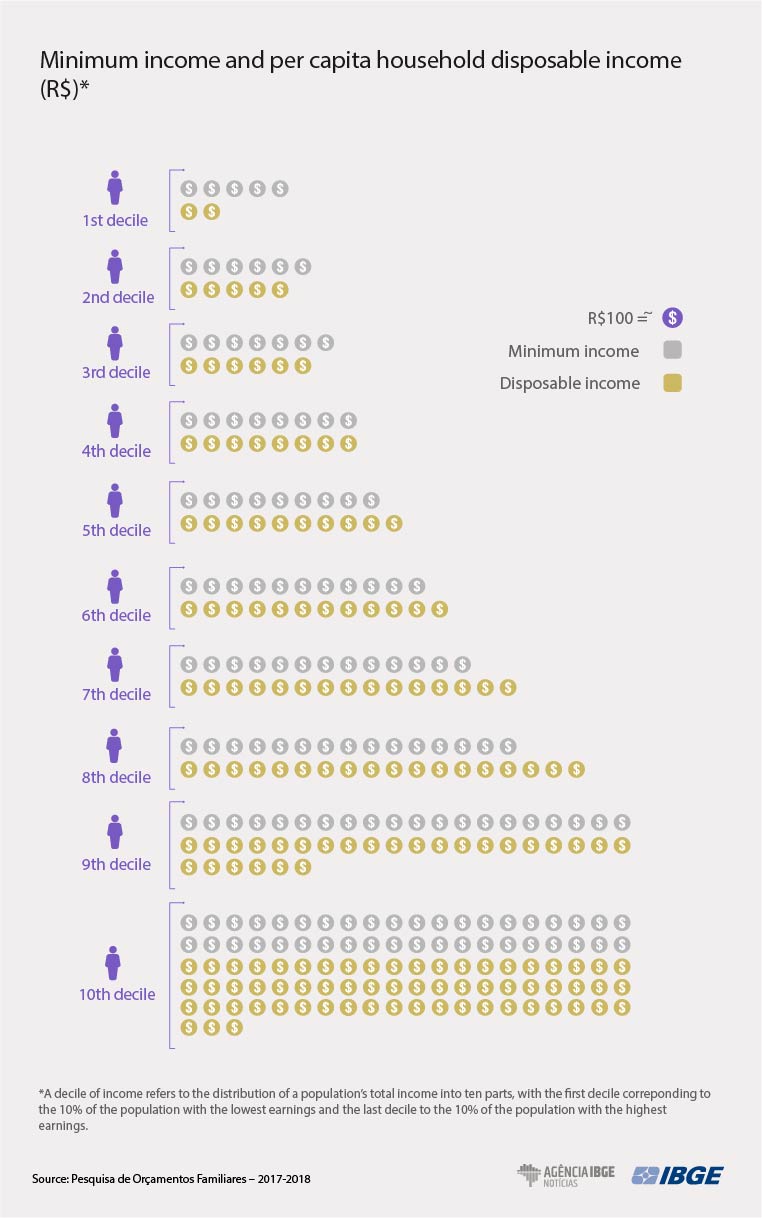 “The monetary share of income corresponds to amounts from work or transfers, such as retirement pensions, pensions and social programs. Non-monetary income, in turn, refers to gods and services that families do not pay for, including those provided by the government, institutions and other households, for example, medicines offered by a healthcare unit, a gift or green vegetables taken from one’s own vegetable garden, for example,” Mr. Oliveira explains.

Spending is highest on housing

On average, a person spent R$ 264.66, per month, on housing, including rent, estimated rent, condominium fees and taxes. “About 1.7% of the persons lived in housing units whose rental surpassed 1/3 of the net disposable income, which is considered too high. Centage was that of the Southeast (1.0%),” analyst Luciana Santos remarks.

Spending on public utility services, such as electricity, water and sewage fees, domestic gas and communication (landline and mobile telephony, subscription TV and Internet), was R$ 114.12, being most significant on communication services (R$ 45.16) and electricity (R$ 39.64).

“Persons in the lowest income strata spent most of their budget on electricity, being 42.2% in the first range. On the other hand, communication services made up most of the spending in households with the highest earnings, with 53.7% of the persons in households of the last income range,”, Ms. Santos adds.

Most of the total spending was on healthcare services (R$ 86.48) and the remainder on medicines and pharmaceutical products (R$ 46.75).

Between 2017 and 2018, 26.2% of the persons belonged to households with somewhat limited access to healthcare services and 16.4% to medicines. “Lack of Money was the main reason reported for limited healthcare access (16.9%) and for the acquisition of medicines (11.0%),”Isabel Martins, analyst of the survey, explains, as she adds that households with children had more significant restrictions in the case of healthcare (12.9%) and medicines (8.4%) than households with elderly persons (5.7% and 3.7%, respectively).

In the period analyzed, 44.6% of the persons lived in households where health was ranked as good; 28,9% as satisfactory and 26.5% as bad. Among those who ranked health as bad, 22.1% lived in urban areas, and 4.3%, in rural ones. The evaluation was also varied among Major Regions. The biggest percentage of those who saw health as good was in the Southeast (19.7%), and the smallest, in the North (3.3%). The biggest proportion of bad evaluations was observed in the Southeast; the smallest, in the Central West (1.90%).

POF also shows that the average per capita spending on education was R$ 120.16. A total R$ 68.13 of it referred to non-monetary spending, without cash disbursement, as it is the case of public education provided by the government. Monetary spending amounted to R$ 52.03. That refers to either cash or forward payment.

“Net lending of education also varies with household income. For example, households in the two highest income ranges ended up spending more in private education. The same is true in the case of reference persons with a higher education degree,” the IBGE analyst adds.