The survey manager, André Martins, explains that although there is a difference in the consumption of rice and beans among people of different income classes, those products still are very present in the overall Brazilian diet. However, in households with lower income, the consumption is higher. “Processed products, which have more value in the market, are more often found in households with higher per capita income”, he says.

POF considers as frequency of consumption the percentage of the population aged 10 or above who reported have eaten a certain product within the 24 hours before the interview. The average per capita consumption measures the amount of food, in grams, consumed by a person per day.

Products like candies, pizza, fried and baked snacks and sandwiches are more frequent among people with higher income and the consumption is also higher among them. One example is pizza, a product reported by 4.6% of the households with higher income, whilst households with lower income only reported 1%. Regarding the amount, people aged 10 or above, from households of the first income quarter  (the lowest one), consume, on average, 1.8 grams per day, whereas those from the last income quarter (the highest one) consume 12.5 grams. 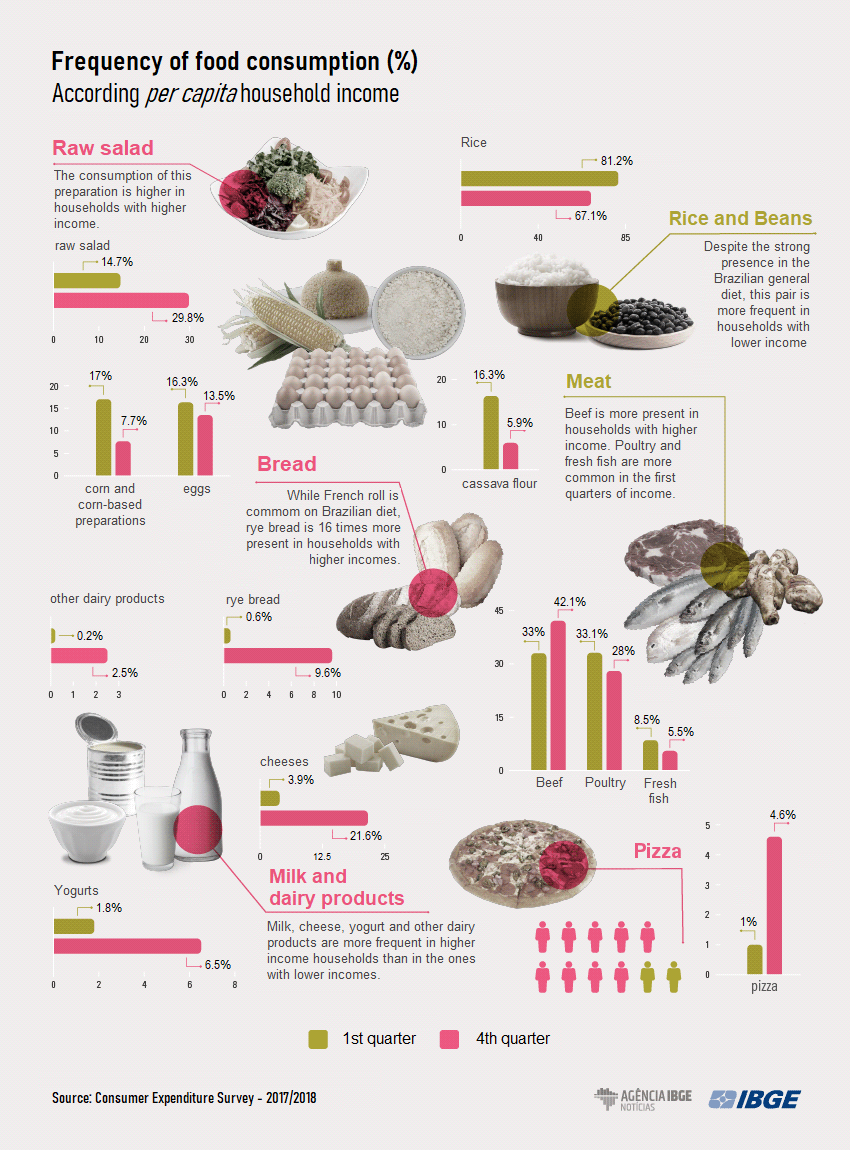 “This happens because people with higher income can afford a large variety of food. Income allows people to choose those products.  Although they do not have a desirable nutritional quality, they cost more money”, says Martins. The survey also pointed out a reduction in the frequency of consumption of rice and beans, and an increase in prepared meals with those products. The consumption of beans changed from 72.8%, in 2008-2009, to 60%, in 2017-2018.

According to André Martins, although  the consumption of those food is decreasing, it is still very present in the Brazilian diet. “It is observed that the diet is very based on traditional Brazilian cuisine, with rice, beans and meat. This is a good sign, considering that almost 70% of our average daily energy comes from fresh or minimally processed food. But we still consume an amount of legumes, fruits and vegetables below the recommendation”, he analyzes.

The frequency of consumption of fruits, vegetables and legumes was lower among teenagers than among adults and elderly persons. The only exceptions were acai and potatoes. Furthermore, the consumption of highly-processed food, like chips, sausage and soft drinks, were higher among younger people. The Food Guide for the Brazilian Population, from the Ministry of Health, advises to avoid those kinds of products. According to the guide, those products are nutritionally unbalanced and are consumed in excess. 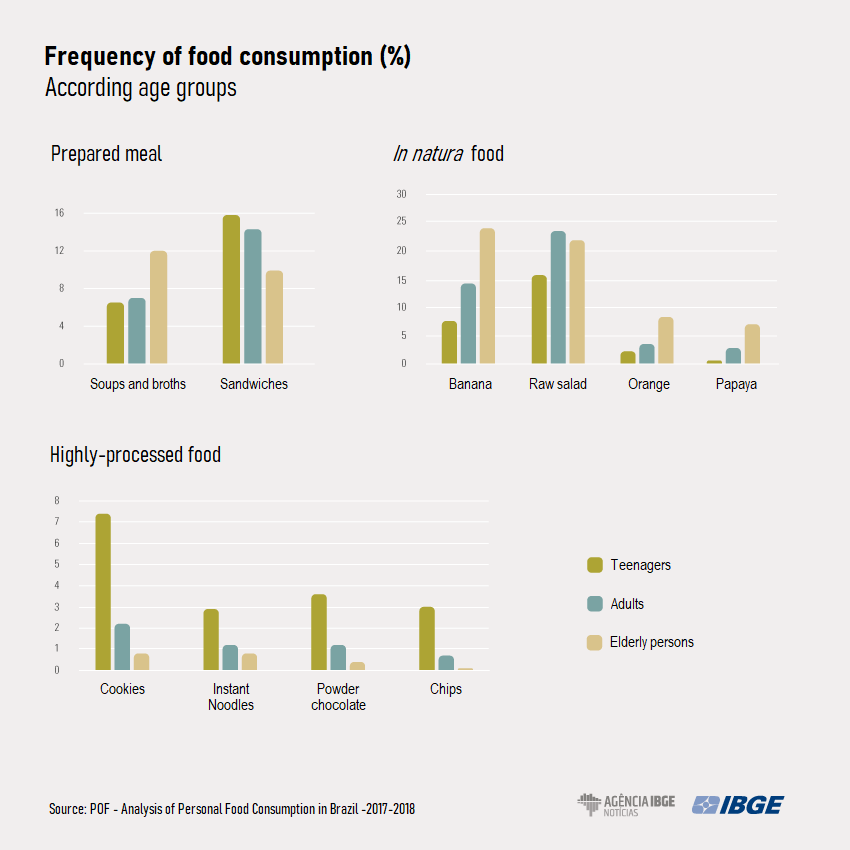 “People aged 60 or above consume more fruits than teenagers. Moreover, this age group has more participation in the energy consumed from fresh and minimally-processed products. Among teenargers, the participation is lower,” Martins explains. The cause, according to the researcher, is due to the food choices made by teenagers and elderly persons during the day.

“It is the same result since the last POF. Teneergers consume less fruit, legumes and vegetables and more pizza, snacks and other highly-processed food. This kind of diet facilitates the appearance of obesity and other diseases,” highlights Dr. Rosely Sichieri, a survey advisor.

Regarding sex, the frequency of consumption of all vegetables, legumes and fruits, with the exception of potatoes, was higher among women than men. Women also recorded a higher frequency for cookies, cakes, candies, milk and dairy products, as well as coffee and tea.

Moreover, women also consume a larger amount of vegetables and fruits, whilst men consume more of almost all the other food. The daily average per capita consumption of beer among men was more than the triple of the women´s average consumption (54.5 g/day against 16.4 g/day).