The number of employed persons who were temporarily away from work due to social distancing fell from 13.5 million in the first week of June to 12.4 million in the second week of that month. As the unemployed population remained statistically stable in this period, nearly 1.1 million persons could have returned to work with the relaxation of social distancing adopted in some cities of Brazil. In the first week of May, 16.6 million were away from work.

These data are from the weekly PNAD COVID19, released today (3) by the IBGE.

"In relation to the first week of May, the result may mean some return to work, but also layoffs, as the unemployed population increased by two million in this comparison. So, the two effects could have happened", explained Maria Lucia Vieira, coordinator of the survey, adding that 11.9 million persons were unemployed in the second week of June. 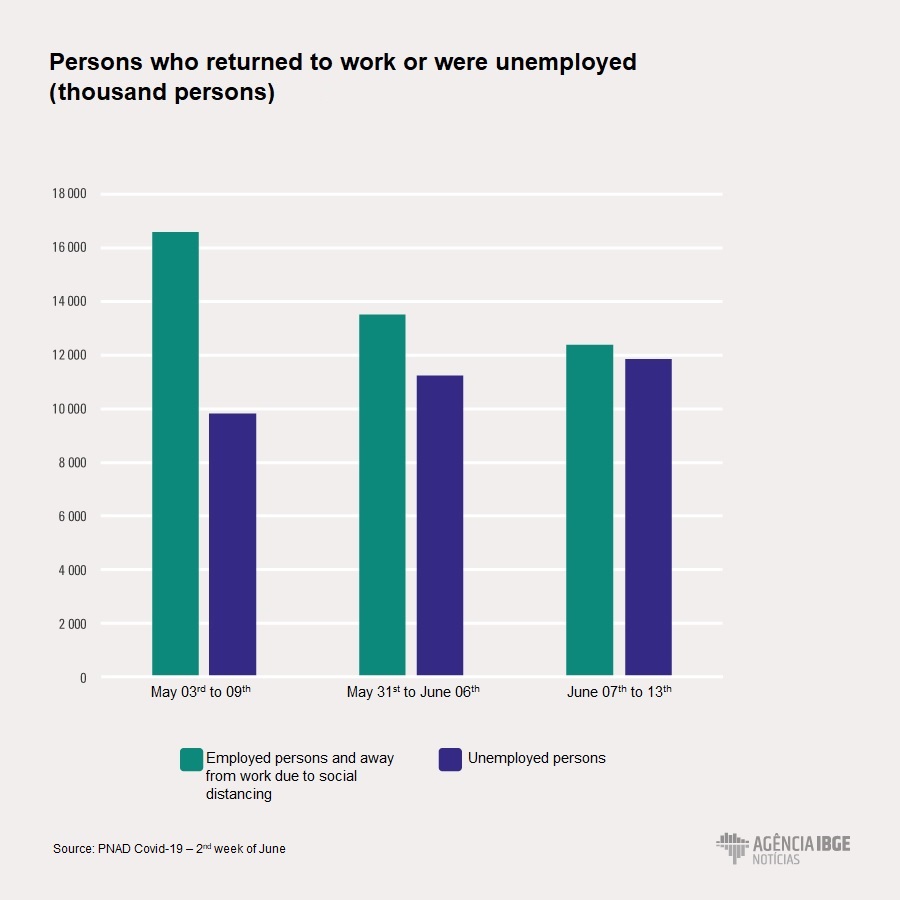 Among those employed, 8.5 million worked remotely, which represents 12.5% of the workers not away from work due to the pandemic. This group, which swung along the last weeks, reaching 8.9 million in the first week of June, returned to the level of the beginning of May (8.5 million).

According to the survey, those unemployed who would like to work, but did not look for work either due to the pandemic or due to the lack of jobs in the locality where they live, stood at 18.2 million persons, pointing out to a stability in the comparison with the first week of June. This group corresponded to 68% of the unemployed persons who did not search for work and would like to work.

The informality rate stayed at 35.0% in the second week of June, hitting 29.2 million persons. The number of informal workers dropped in the third week of May (28.5 million), though it rose again in the last weeks. They were 29.6 million in the beginning of May.

PNAD COVID19 also shows that nearly three million persons with some symptom of flu syndrome looked for medical care in health units in the second week of June. This figure remained statistically stable compared with the previous week (2.8 million), though it is lower than that registered in the beginning of May (3.7 million), when the survey started. In the second week of June, 15.6 million persons complained about any of the flu symptoms investigated by the survey (fever, cough, sore throat, difficulty to breathe, headache, chest pain, nausea, stuffy or runny nose, fatigue, eye pain, loss of smell or taste, and muscle pain). In the first week of May, 26.8 million were symptomatic.

The symptoms slightly changed in the second week of June, compared with the previous one. Most of the interviewees reported a headache (7.3 million). The second most recurrent complaint was stuffy or runny nose (5.5 million), followed by cough (4.7 million), muscle pain (4.3 million), sore throat (3.7 million), fatigue (2.5 million), loss of smell or taste (2.3 million) and difficulty to breathe (2.1 million). 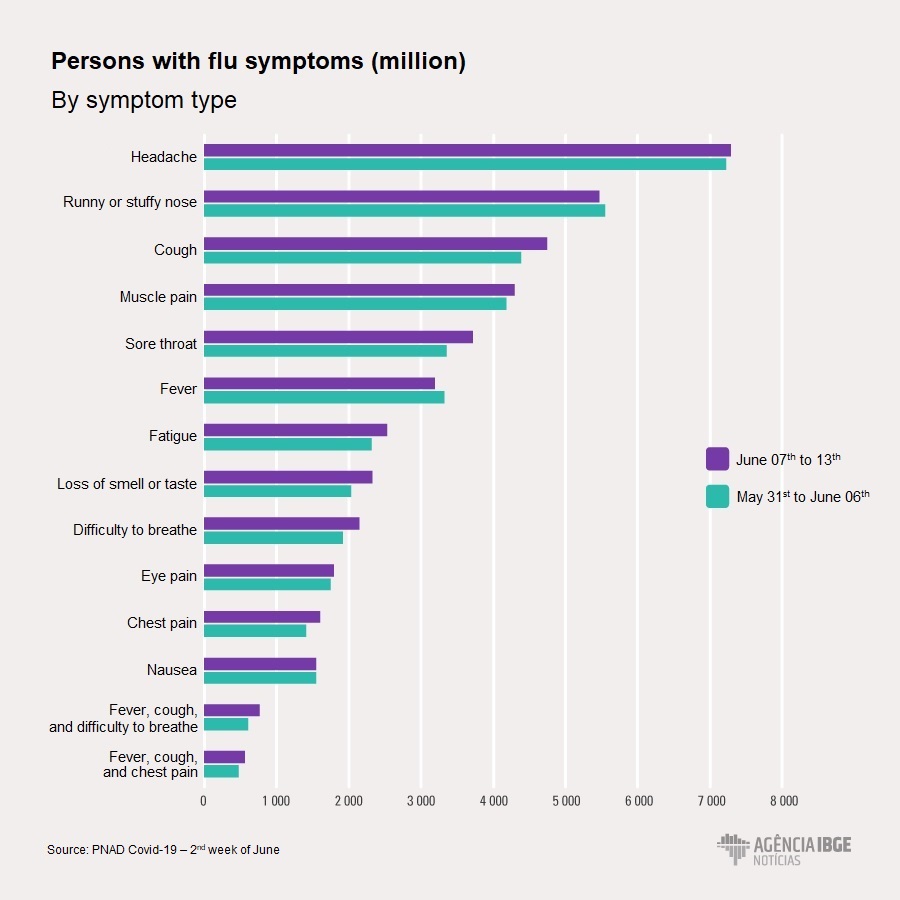 "Of the three million who had some symptom and looked for medical care, more than 85% went to health units of the public network," notices Vieira.

Of the 900 thousand who looked for care in hospitals, either public, private or military, in the second week of June, 110 thousand were hospitalized, eleven thousand less when compared with the first week of June. Carried out with the support from the Ministry of Health, PNAD COVID19 is a version of the National Household Sample Survey (Continuous PNAD) aiming at pinpointing the impacts of the pandemic on the labor market and at counting persons with symptoms associated to the flu syndrome. The IBGE releases the survey on a weekly and monthly basis. The survey is considered one of the IBGE´s Experimental Statistics.