The production of cow milk surpassed the milestone of 30 billion liters for the first time ever in the history of the Census of Agriculture. The productivity has been continuously increasing since 1970 and rose 62% in 2017 when compared with the 2006 data. This means that less cows were needed to produce the same amount of milk. According to the data of the Census of Agriculture, from the 1.6 thousand liters per cow in 2006, the production changed to 2.6 thousand liters per animal in 2017. 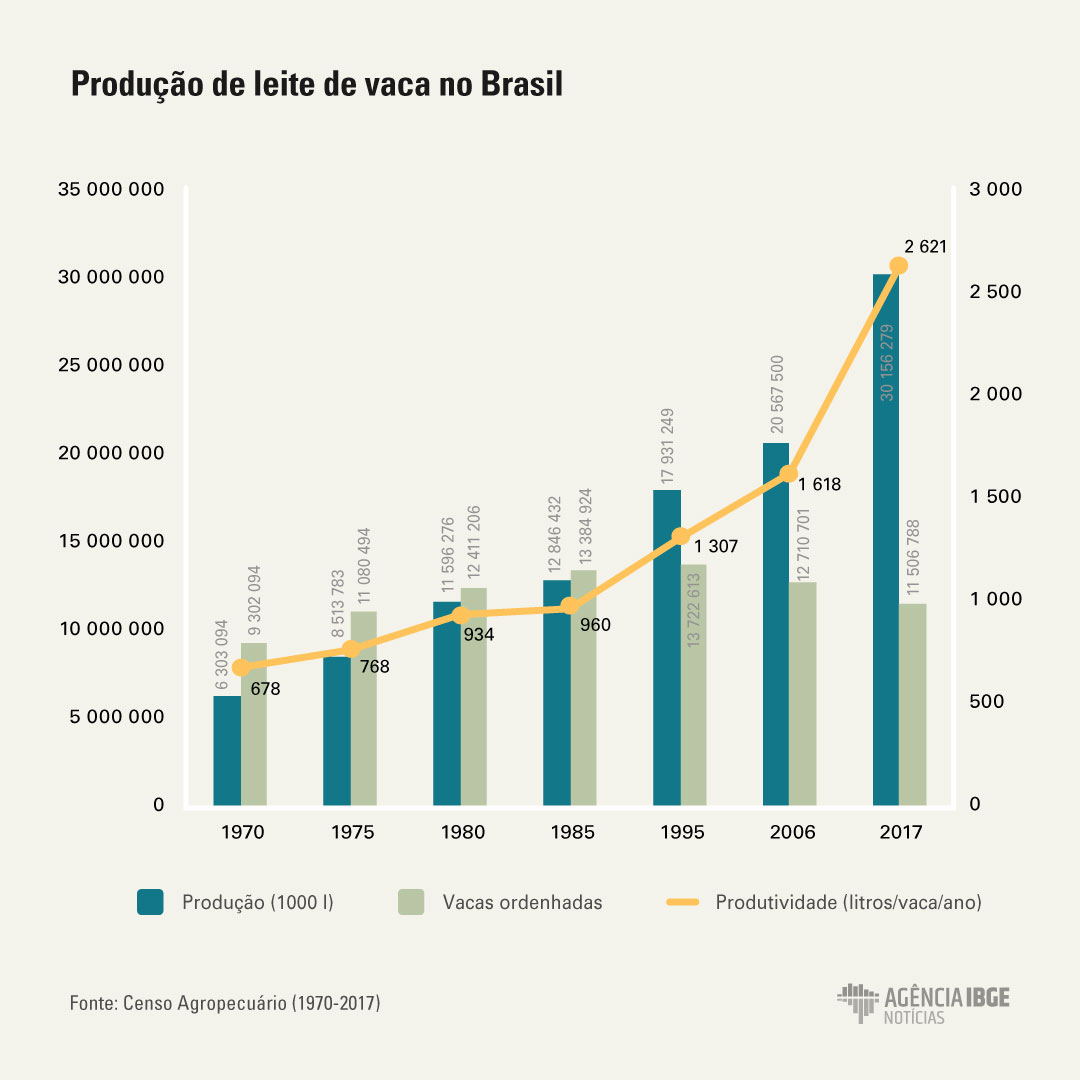 As a demand generated by those concerned either with their health or the environment, a productive system has been gaining public and attention in the sector: the production of organic milk.

Agronomist Ricardo Schiavinato acquired Nata da Serra farm in 1988, when he was still in college. "At that time I hardly knew what organic agriculture was and it was hardly spoken in academia. Indeed, organic agriculture was quite discriminated in the 1990s. They said it was a crazy stuff", explains the producer, who continued in the conventional production of milk until facing an economic downturn in the 1990s.

"I ended up indebted, I had a huge difficulty. I even thought of stopping that activity, when I met someone who was wishing to deal with organic production. Then I began to study the organic issue and convert my herd. By 1999 we were certified as organic", says him.

Schiavinato tells that he produced one thousand liters per day when he worked with conventional milk and the production fell to 250 liters when he converted into organic. "Despite milking less, it was a profitable activity I managed to lose money with a thousand liters and be profitable with 250. Even not being a big profit, it was a profit, I did not lose money", explains him.

The increase in the productivity in the farm came with the knowledge acquired from the Balde Cheio (Bucketful) project, of the Brazilian Agricultural Research Corporation - Embrapa, which trains professionals of the milk production chain for the use of technologies. Embrapa´s agronomist André Novo states that it is possible to increase the productivity of milk also in the organic management.

"Our experience in driving some farms of organic milk clearly shows that there is space to apply a number of product and process technologies aiming at high productivity, even with the system restrictions. Undoubtedly, conventional systems produce more quantity at a lower cost, but, despite the higher cost, the production factors of organic milk can be handled and hit a good productivity", explains him.

To produce organic milk, the producers should follow the requirements established by Normative Ruling no. 46, of the Ministry of Agriculture, Livestock and Supply. One of them is that the daily food of the herd should contain a maximum of 15% of non-organic food. Genetically-modified food is strictly prohibited.

"The production system strictly follows a number of specific rules of sanity, soil management, use of chemicals, animal comfort and welfare and control of allowed inputs", explains André Novo. Another rule establishes that every animal should be, preferably, free from cages, stables, ropes or any other method that hinders its natural movement.

Claudinei Saldanha Júnior and Nilson Saldanha are partners, producing organic milk in a 26-hectare property. They provide milk to a large multinational company, which producers powdered milk. "Our herd has 95 animals. Of them, 76 are adult cows, being 56 dairy cows producing 900 liters of organic milk per day. All of them are raised on pasture and they are supplemented only with organic corn and soybean. The sanitary control is also made with homeopathy", tells Claudinei Saldanha.

Sustainable production of milk in Bahia

In Bahia, a dairy farming company invested in the idea of a healthier herd, fed in the pasture in a more natural and sustainable way. The three farms of the company are located in the municipality of Jaborandi, west of the state, holding the biggest production of milk with cattle in dairy farming in Brazil.

Besides eating naturally from pasture, the cows live loose, with no injection of hormones typical of confinement, free from antibiotics and diet based on ration. "The result is a healthier milk, richer in nutrients", informs Craig Bell, associate director of the company.

The current herd comprises of 2,700 cows. A team of 110 employees work in the production and processing of 12 million liters of milk per year. "The genetics of the cattle, with a technology brought from New Zealand, coupled with feeding in the pasture assure the high quality of the product. The maximum efficiency from milking to filling, with a strict control, should be considered as well", explains zoo-technician Juliano Almeida.

Raw milk is collected though mechanized milking to instantaneous cooling, stored between 3 and 5 degrees of temperature, which precludes the development of bacteria. "Besides the concern with the quality of the product, the company assumes the responsibility with the preservation of the environment, mainly in relation to the use of water and sustainability of the local community", says Almeida.