Beekeepers are nearly one-fourth of landless producers in Minas Gerais

Of the more than 5 million agricultural establishments surveyed in the 2017 Census of Agriculture, nearly 1.5% had landless producers, those without a defined physical space who take the producing opportunities offered to them by local circumstances or by nature.

In order to dedicate to this activity, lawyer Mr. Rafael Porto quit the multinational company where he had worked for 14 years, left his home town and went to Bom Jardim de Minas, a municipality of the Zona da Mata of Minas Gerais. The state occupied the first position of establishments with landless beekeepers, housing 15.2% of the national total. Rio Grande do Sul (14.2%), Bahia (13%), Santa Catarina and São Paulo (10.4%) are the other municipalities in the top five.

The strong will to have a profession related to the countryside made Mr. Porto chose beekeeping. He keeps his beehives in some establishments, as farms and fields in the area, which belong to other people. “All the beekeepers I know do that: leave their beehives in the land of others, returning part of the production as payment”, he explains.

Mr. Porto does not produce honey, just green propolis, a substance formed by the resins bees use to disinfect and close the hive cracks. He says he chose Zona da Mata in Minas because of the greater concentration of the herb known as "vassourinha-do-campo" or "alecrim-do-campo", from which the bees collect the resin they use to make the product. Harvests are carried out by harvesters on the sides of the hives, exactly where bees deposit the propolis in order to close their shelter.

The crop goes from November to May, a hotter period, more propense to rainfalls, and Mr. Porto sell the green propolis to commercial warehouses. “They buy the raw product and sell it to exporters. A good hive, a productive one, is able to generate from one to two kilos of resin per year”, he says. Green propolis is mainly used in Japan to help people undergoing cancer treatment. 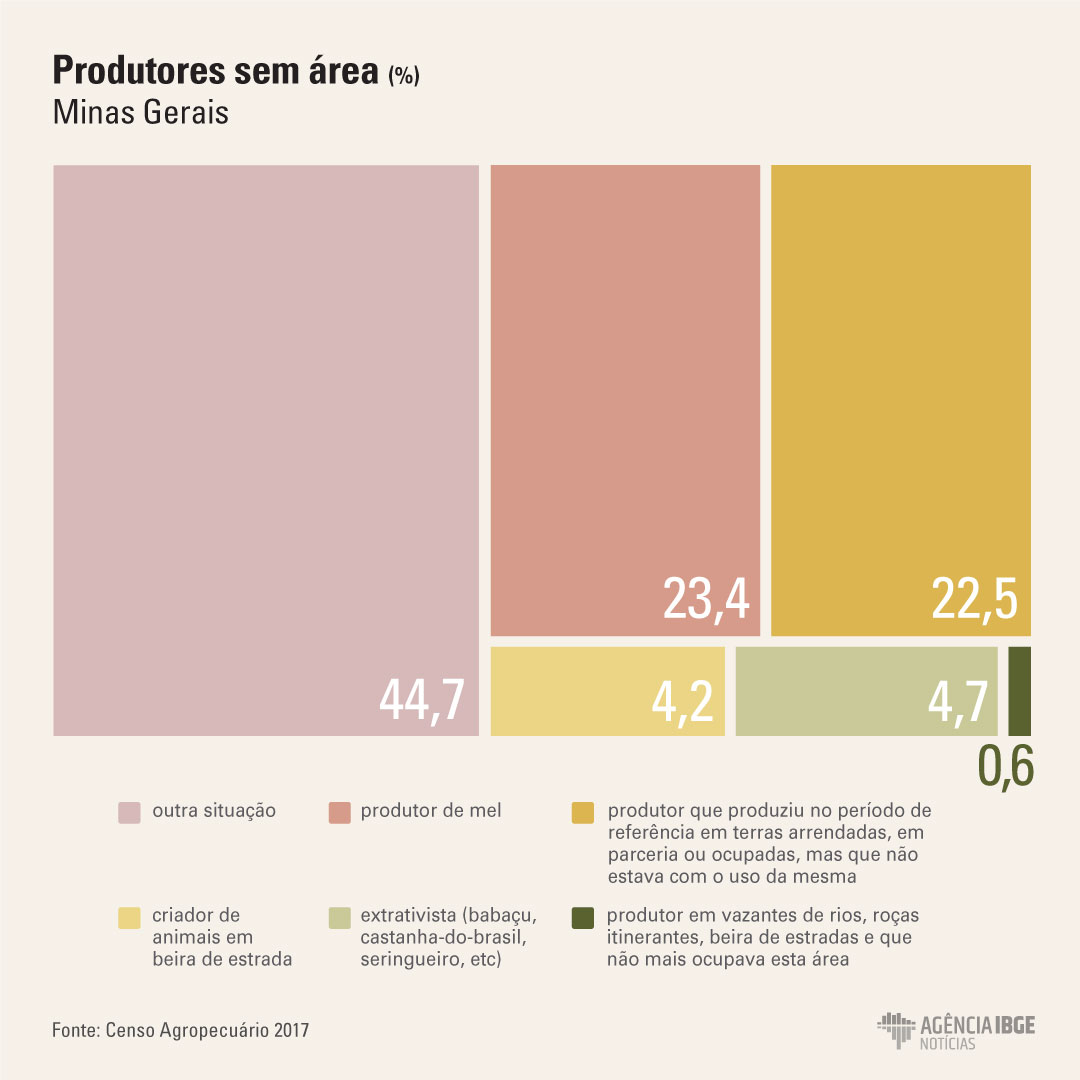 Considering all the kinds of landless producers, the highest concentration is in the Northeast: Ceará leads with 30.7% of the country, followed by Maranhão, with 22.8% and Piauí, with 10.8%.

Who are the landless producers?

One of the managers of the 2017 Census of Agriculture, the IBGE analyst Mr. Marcelo de Souza Oliveira explains that, besides beekeepers, wild-crop harvesters (babassu or rubber trees, for example) and roadside animal farmers are also considered. The list also encompasses the classification of producers in rivers low tides, shifting cultivation and in roadsides who had abandoned the area, as well as the farmer producing in the reference period of the survey in rented, shared or occupied lands, but who were no longer using them when the questionnaire was filled out. “They are producers whose areas are no longer under their possession”, he clarifies.

For Marcelo, this classification demonstrates the universality of the survey. “We visit every producing unit. It is an extremely heterogeneous universe, encompassing all producing activities", he concludes.

Unlike the 2006 edition, the 2017 Census of Agriculture did not regard as landless the employee/resident producer who worked in the area managed by the owner/producer. In other words, an employee farming in the employer's land was not accounted for as a landless producer is 2017, which makes the comparison between the two censuses impossible.