Daniele Miranda, her husband Paulo José da Silva and four children live for nine years in a house in the district of Realengo, west of Rio de Janeiro. Each element of the house is part of the history of the family, which is also told by the IBGE through the household surveys.

The IBGE´s household surveys, like the Continuous National Household Sample Survey - Continuous PNAD, Consumer Expenditure Survey - POF, National Survey of Health - PNS and Population Census portray the Brazilian population, not only from the information on residents, but also through the characteristics of the households. The first characteristic perceived in Miranda´s property is that it is a house. This is the most popular type of dwelling in Brazil, resisting to the verticalization of the cities. According to the data of the Housing Units and Residents supplement of the Continuous PNAD, 183.3 million persons lived in houses in 2018. While the apartments accounted for 13.8% of the 71 million homes in Brazil, houses corresponded to 86%. Others like rooming houses and tenements added up to 0.2%.

Miranda proudly commented that she designed every work since their marriage. "This lot belongs to my husband´s family for more than 40 years. When we came, we only had roofing tiles. It rained more inside than outside the house", reminds her, laughing.

Information about the material of the walls, ceilings and floors are key to better understand the reality of millions of families. Maria Lucia Pontes, manager of the Continuous PNAD, explains that these data refer to the suitability of the dwelling in terms of health and welfare of the family.

According to Pontes, the IBGE follows statistical manuals in order to define what is essential in the questionnaires. In addition, the Ministry of Cities demands on the type of sewage disposal and that of Mines and Energy, on the type of energy used to cook food. "They are different demands that take us to assess whether the housing units contribute to the quality of life", comments the researcher. 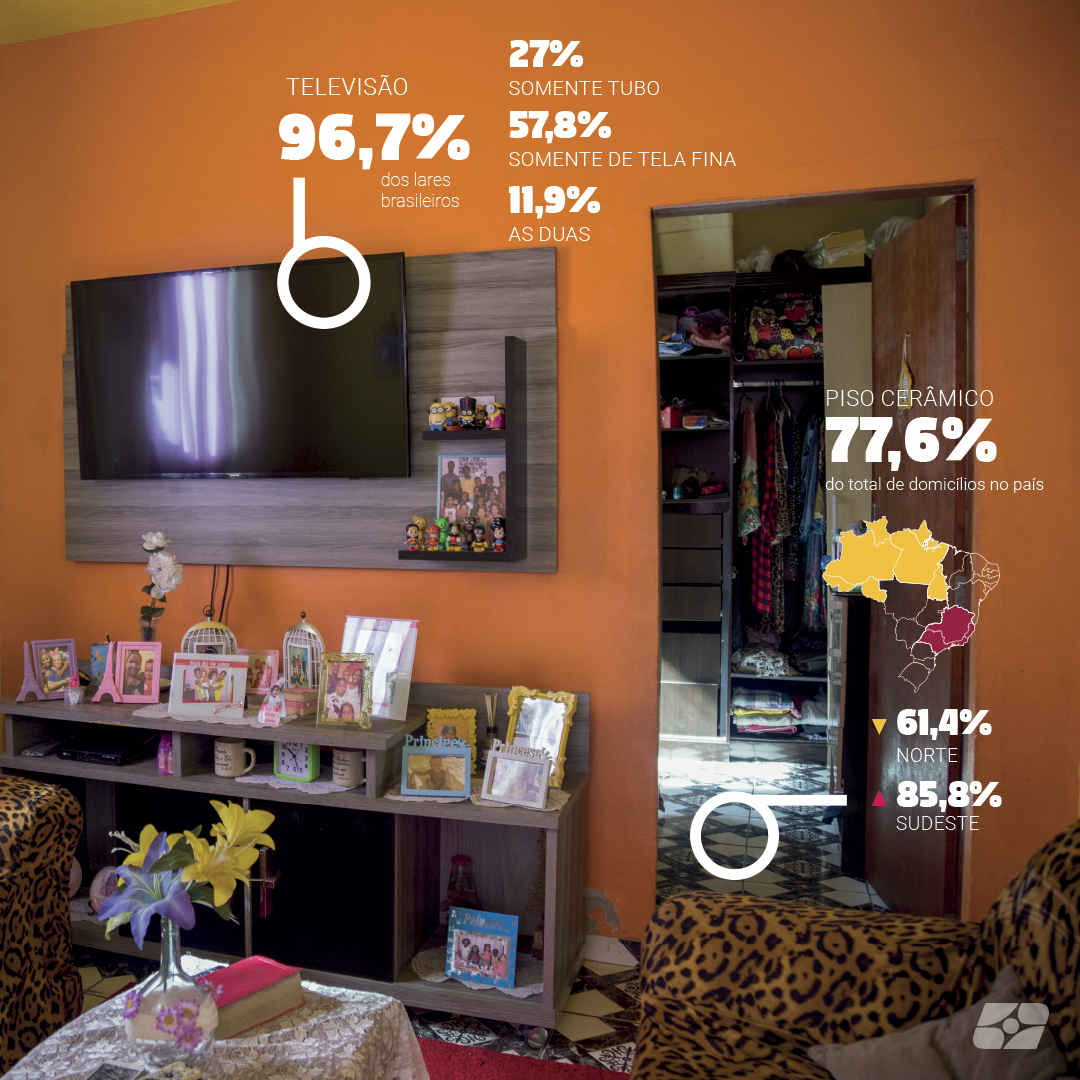 Miranda also changed the floor, which was made of wood and now it is made of ceramic. "The soil is quite wet and wood gets damaged soon. Besides lasting a long time, the ceramic floor is cool even in hot days. I spread rugs in the house, as it is impossible to step on the floor some days", tells her.

Regardless of the climate, the ceramic floor is preferred by most of the population and it is present in 77.6% of the Brazilian homes. On the other hand, the wood floor – used, for instance, in parquet and other wooden floor coverings – is only used in 6.7% of the Brazilian housing units.

A number of goods are also investigated by the IBGE, like stoves, refrigerators, washing machines and TV sets, which has a special place in the Miranda´s living room. "The ownership of certain goods is related to the purchasing power of the household and can vary a lot", explains Adriana Beringuy, analyst of the Continuous PNAD. 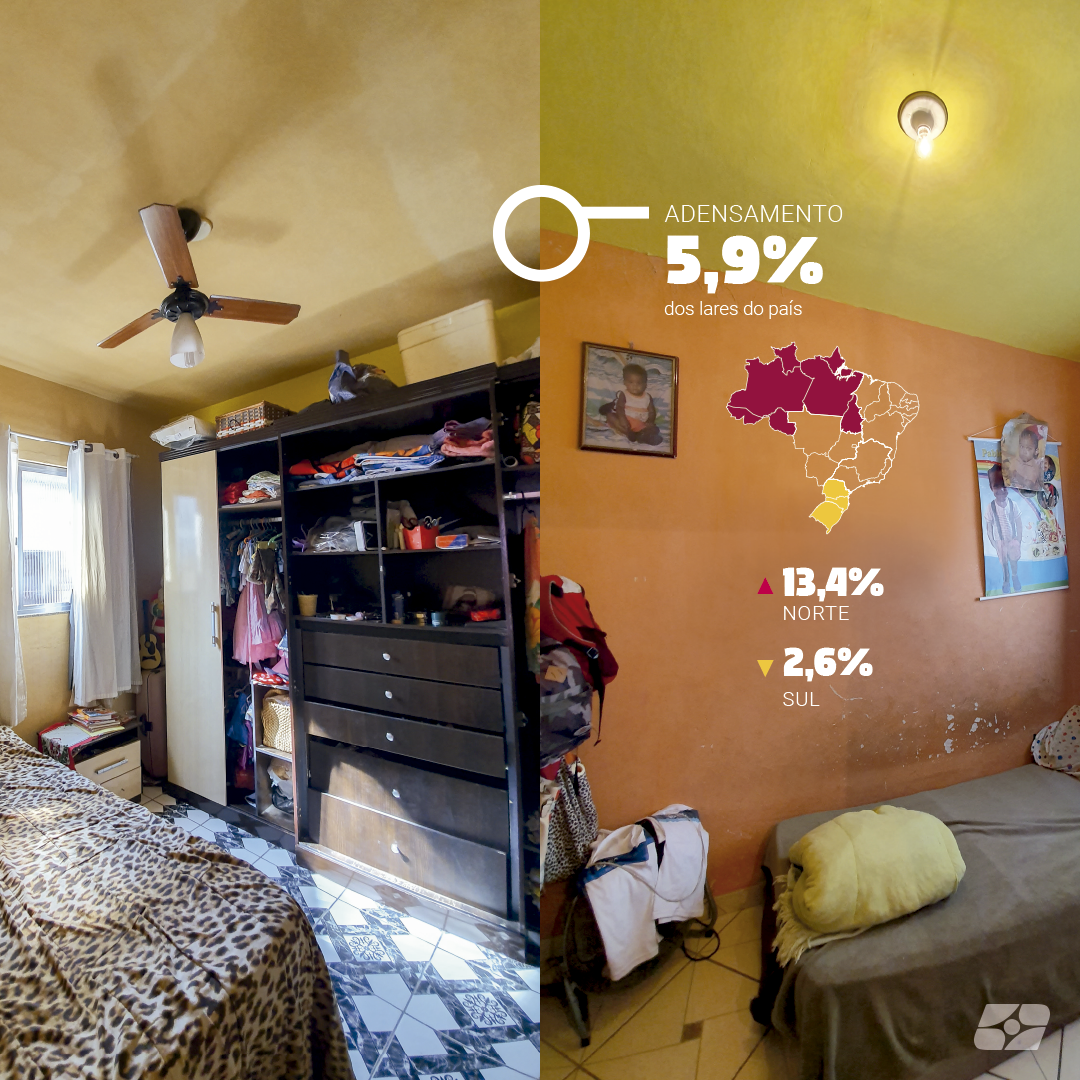 The couple sleeps in the first bedroom. The four children sleep in the second bedroom: Thayson, 12, Caio, 9, Sofia, about to complete 6, and Pablo, 3. They are the inspiration for the next project. "Besides fixing the leaks, we will replace the tiles with a slab until the end of the year, as we want to build a second floor. We will put the older boys in a separate bedroom, because they can sleep alone", explains Miranda, commenting that "they cannot continue to share mattresses on the floor".

Her concern reflects the reality of the excessive household densification, which occurs whenever more than three persons share the same bedroom. According to the Summary of Social Indicators, which uses the data of the Continuous PNAD, this situation affected 12.2 million persons in 2.3 million housing units in 2017. Among the indicators of unsuitability of the housing units – conditions that make the housing units precarious or vulnerable –, densification is the one that affects more persons, reaching 12.1% of the children aged between 0 and 14 years. 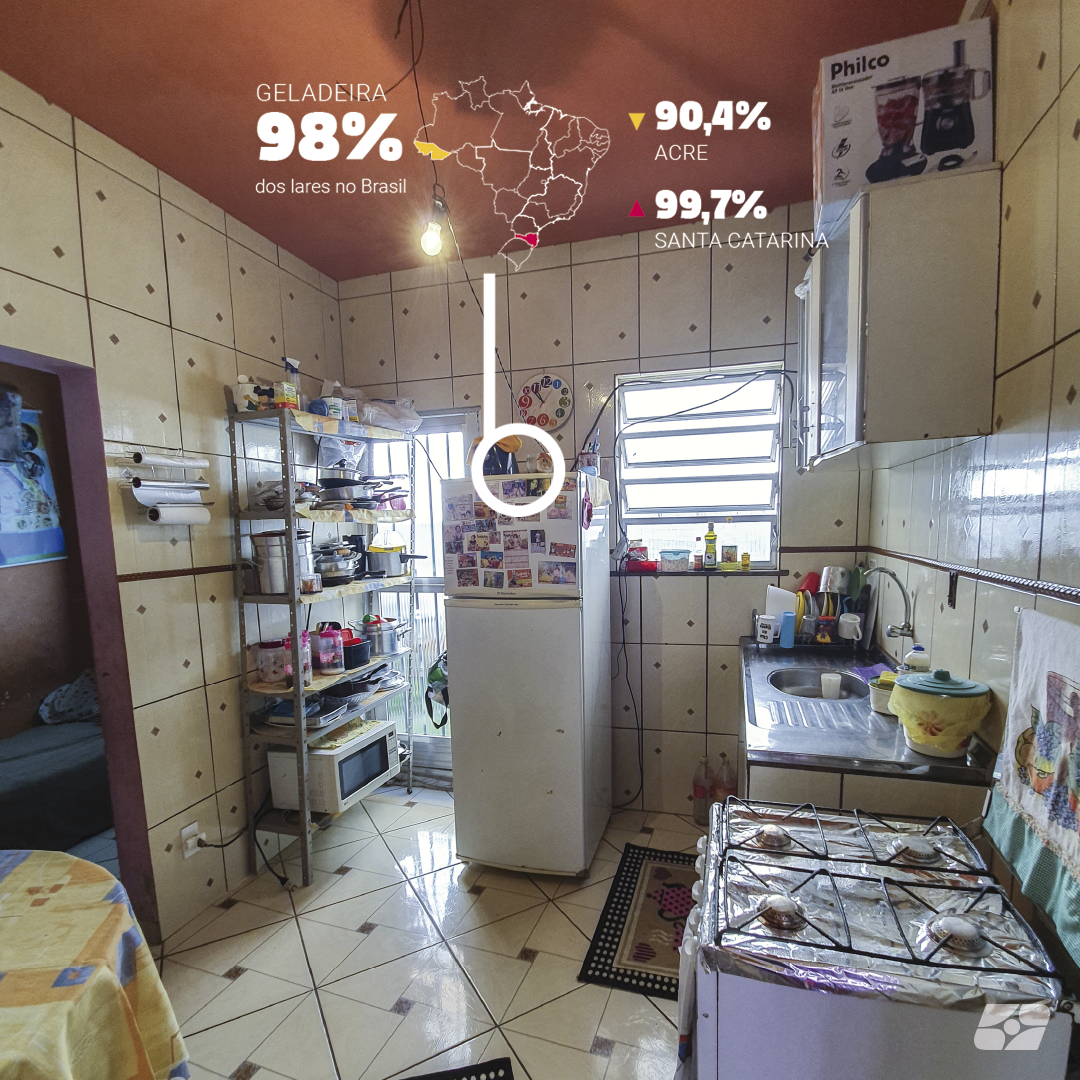 The changes will not stop. After building the bedrooms in the second floor, Miranda wants to tear down walls and expand the kitchen. The major concern is the family parties, which make the refrigerator so small for so much food and beverages. "When we make parties, each one brings a snack, a sweet dish and beverages" tells her with a smile. For Miranda, family is always in the first place in the projects. "We are building, refurbishing, for our children. We are not here forever, isn´t it? So we have to let something for them, something solid", concludes her.

Check the full story in the Retratos Magazine no. 18.

This was the last edition of the Retratos Magazine, which is not being published anymore, due to the measurements adopted by the IBGE to rationalize expenditures and reduce expenses.

Along its 18 editions from May 2017 to October 2019, Retratos published stories on current subjects, linked to the work of the IBGE in portraying the reality of Brazil for the exercise of citizenship.

Click here to see all the editions of the magazine.