Get to know the facts behind each population census 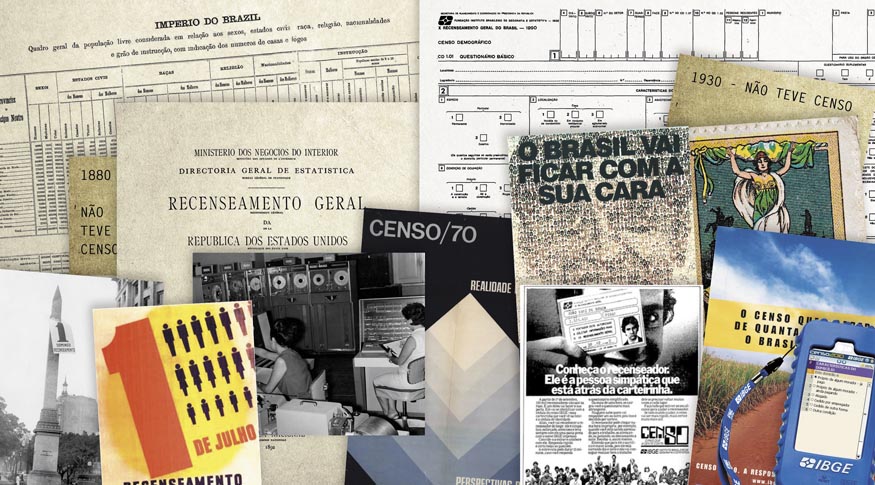 The 2020 Census  will be the 13th in Brazil but the ninth conducted by the IBGE. The size of the operation – visiting all the households in the country – and the relevance of its results – working as the major base to several public policies – are some of the reasons why, since 1872, the enumeration processes have involved society as a whole.

Tracing back the major facts throughout the censuses in the country is also a way of telling the History of Brazil.

The Empire Census was the first census in the Brazilian history and was carried out by the General Board of Statistics – a body constituted in 1871. More than counting the population, this census surveyed color, sex, social status (free or slave), marital status, nationality, employment and religion.

In 1879, the General Board of Statistics comes to its end, and the 1880 Enumeration was rescheduled for 1887, but the project was never put to practice.

The 1st Republican Census was marked by its slowness. After five years of data collection, no state in the country had yet concluded its counting. It was just in 1900, on the next census's eve, that the results were released.

The 1900 Enumeration was the third in the country and the first one after the Republic Promulgation. The operation started on December 31, 1900. The first results – released in the next January – were those from Rio de Janeiro, but the operation had to be done again due to data deficiency. The final results were released in 1907.

The political context and the retrenchment of the General Board of Statistics’ autonomy prevented the 1910 Census' operation.

Under the pressure of society and press, the 1920 General Enumeration was marked by haste, because the law establishing its conduction had only been approved in January of that year. The results were shown in the Universal Expo in celebration of the anniversary of the Independence of Brazil, in 1922.

For political reasons, as the 1930 Revolution, there was no  Census that year.

The 1940 General Enumeration was the first performed by the IBGE. There was a strong campaign to encourage Census answering. Due to World War II, the new machinery was not delivered and the results were counted in the same machinery used in 1920. It took seven years between the collection and release of the results.

Aiming at the development and the comparability of official statistics, the General Enumeration of 1950 integrated the Census of the Americas, in compliance with the UN recommendations. The enumeration committees were composed in states and municipalities to support the dissemination of the operation. The number of questions in the questionnaire decreased from 45 (1940) to 25.

The General Enumeration of 1960 was the first Brazilian Census to use the sampling technique, which investigated, through new requirements, the persons’ and households’ characteristics. For the data processing, the IBGE brought in a large-scale computer, the Univac 1105, which was called “Electronic Brain”.

The General Enumeration questionnaire of 1970 was established and printed in 1968. A character: Julinho, the enumerator, was created for the dissemination campaign, which also counted on with personalities as Pelé.  The first data were released in 1971. By the middle of the decade, the whole Census had already been published.

The General Enumeration of 1980 had the slogan “O país que a gente conta” ("The country we account for"). A computer system of data collection monitoring, which allowed to know, on a weekly basis, the number of concluded areas and the enumerated persons, was one of the great innovations in the operation. For the first time, the preliminary results of a census were released in the same year that the survey has been operated.

The planning phase of the 10th General Enumeration in Brazil started in 1987, but it just occurred in 1991, because the authorization for the new temporary servers was delayed. With the slogan “Ajude o Brasil a ter um bom censo”(Help Brazil Make Census), the operation introduced new aspects, like the Advisory Committee, the School Project and the result dissemination on floppy disks.

The 2000 Population Census was marked by technologic innovation, as the digitization of questionnaires – they were still on paper – and the optical recognition of characters. Aiming at involving the society, the magazine “Vou te Contar” (I’ll tell/count you) was created. The preliminary results were released on December 21 in an event in Brasilia.

In the following video, Zelito Viana and Marcos Palmeira, father and son, recall the experience of being part of the documentary “O país é este” (The country is this one), released in 2002, that portrays Brazil through the 2000 Census data. Check it out!

In the 2010 Census, the paper questionnaire was totally replaced with the electronic method developed in PDAs, handheld computers used by enumerators. The PDAs were equipped with GPS that contained digital maps with the addresses where the enumerators should go. This technology was possible due to the uniification of the census mapping and its migration from the analogical to the digital format. Besides, the questionnaire could also be answered online. The first results were released in December in the same year. The IBGE’s Twitter introduced the institute in the social media.

That was the last Retratos issue, the magazine will no longer be published by the IBGE due to measures of rationalization and expense reduction, adopted by the institution.

During the period from May 2017 to October 2019, the Retratos magazine, in its 18 editions, addressed current themes related to the IBGE’s mission “To portray Brazil by providing the information required to the understanding of its reality and the exercise of citizenship”.

To check out all the Retratos editions click here.