According to the Consumer Expenditure Survey - POF 2017-2018, released today by the IBGE, the monthly average value earned by Brazilian households reached R$5,426.70 in 2018. Among the poorer households that earned up to R$1,908, nearly one fourth of the income (24.3%) came from retirements, pensions and social programs, yet this dependency hit 28.8% when all the cash transfers raised by the survey were considered.

Taking into account the sources of income of all the households, cash transfers equaled to 19.5%, and the non-monetary earnings, which are the acquisitions not paid by the households, represented 14.5%. Earnings from labor were the major source, responsible for 57.5% of the total received.

André Martins, manager of the survey, highlighted the differences in relation to the source of the values received according to the income range of the households: "besides earnings from labor, we also see the importance of the cash transfers and non-monetary earnings in the poorer households, which complement the household budget".

On the other hand, the importance of labor was greater in the households with higher earnings, besides asset variation. "Asset variation includes withdrawals from savings and, in general, richer households have such possibility. And also disposal of properties and expensive goods, inheritances", said Martins. 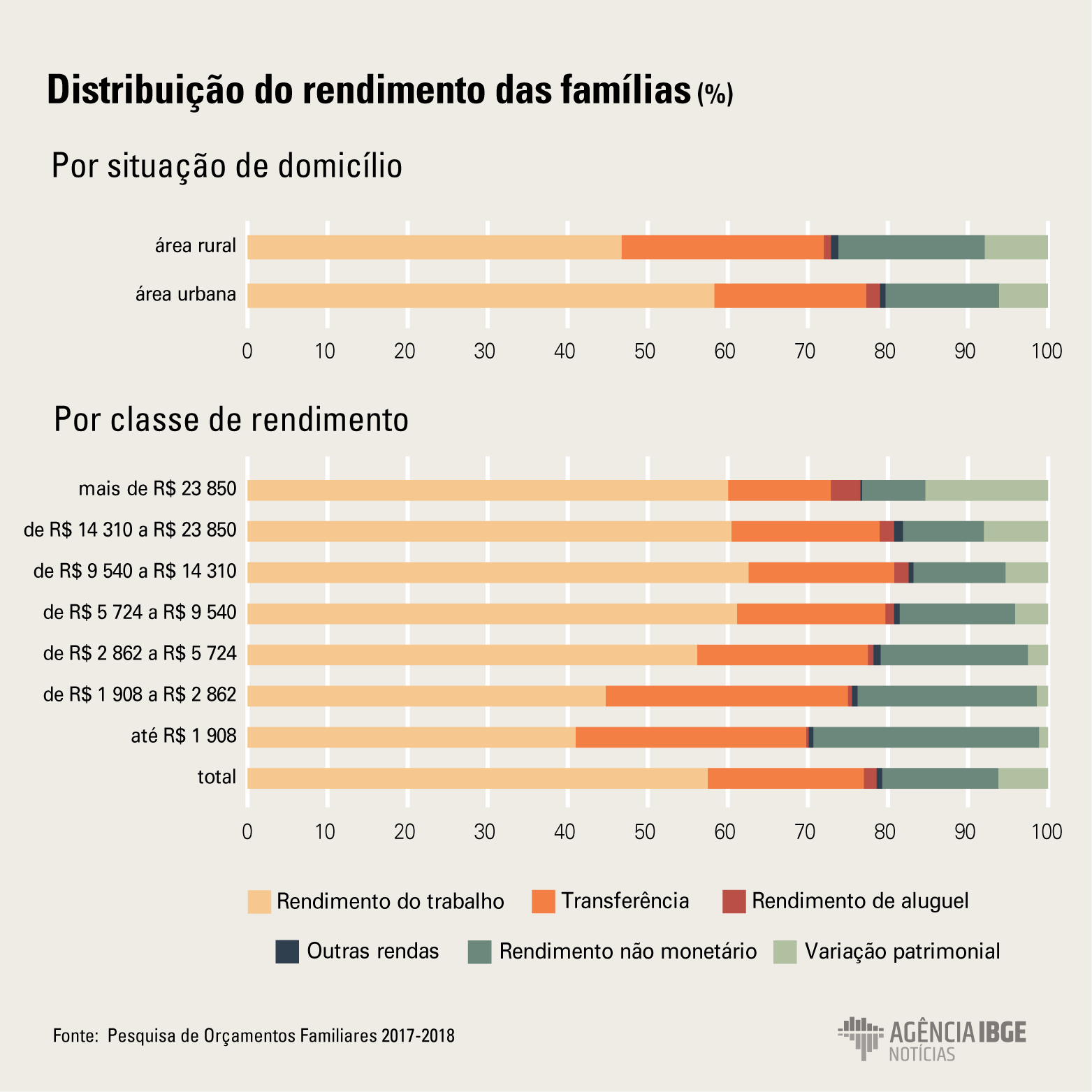 The survey showed regional differences and in relation to the household condition: households in rural condition earned slightly more than half (52.3%) of the value earned in urban areas. Central-West (R$6,772.86) and Southeast (R$6,391.29) were the regions with higher earnings, whereas the Northeast (R$3,557.98) and North (R$3,647.70) registered the lowest values.

"We also see differences in the contribution of the regions to the monthly average household earnings. The Southeast Region represented more than half of this average (51.4%). Conversely, the North Region (4.9%) was the one that contributed the least", explained André Martins.

Only 2.7% of households hijack 20% of overall average of earnings

Whenever households are analyzed by income range, 23.9% of the households earned up to R$1.908,00 (two minimum wages) and contributed with only 5.5% of the average value received in Brazil In other words, of the overall monthly average of R$5,426.70, only R$297.18 came from this group.

"This shows how the extreme sides are unequal when they contribute to the monthly average earnings of the Brazilian households", concluded Martins.