Yanomami - Fragments of a field diary 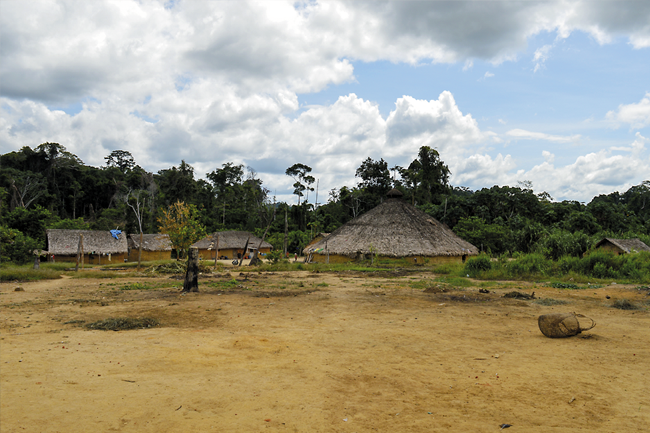 In charge of the IBGE´s Workgroup on Work of Traditional Peoples and Communities, anthropologist Marta Antunes joined the Census of Agriculture team in the enumeration of the Indian areas of the municipality of Alto Alegre, in Roraima. The work aimed at proposing methodological adaptations so that recently contacted Indians understand the concepts of the questionnaire and, thus, pinpoint good practices and lessons learned for the 2020 Population Census, currently in the planning and test phases. The trip was registered in a field diary, which Antunes shared with Retratos Magazine.

"Those missions were marked by the overcome of fears, crossing narrow wooden bridges holding the hands of a Yanomami – either a man, a woman or a child –, going down mountains stepping on narrow steps also looking for the hands of a Yanomami to assure my safety, flying a chopper for the first time in my life, overflying the Amazon Forest under turbulence, overcoming waterfalls upstream and downstream trying to keep the data collection device dry with all the interviews of the missions. We had no time to think about snakes, scorpions, spiders and other animals we could face on the way".

The first time we entered Indian lands was in November 2017, with strong emotions in the first day.

"We took six hours by car from Boa Vista until 'Sítio 14', where we slept outdoors near the Mucajaí River, in the porch of a restaurant house with improvised bathrooms of wooden stakes and black plastic. Fear and cold synthesized that first night. In the next day we left early in the morning to get our canoe, in which we loaded our backpacks, food and gasoline for all the journey – there were many 20-liter gasoline gallons".

After less than one hour going up the Mucajaí River, she took a note in the field diary:

"We have just lost the propeller thrust of our motorboat (...) and we are using our only step propeller. Wow!" November 23, 2017 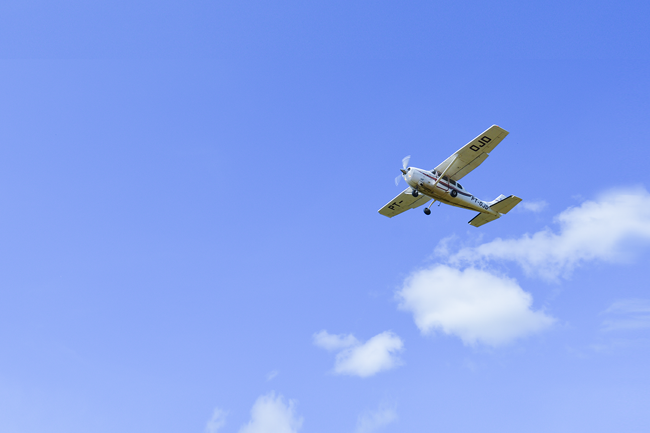 In the Pewaú base, the team asked the Sesai staff to warn the Indian leaders about their presence. They explained what is the IBGE and the work they are about to do in the region:

"After more than a hour of information and negotiation, during which the Indian leaders were distrusting with our presence, they asked for some official printed material as 'white men lie a lot'. The deadlock was broken when we showed them the Data Collection Device - DMC working and the enumerator manual with the IBGE brand".

The procedure of consultation of leaders was repeated in all the Indian communities; they took between some minutes and nearly three hours. In the second mission, the team counted on Yanomami guides, who streamlined the initial negotiation. 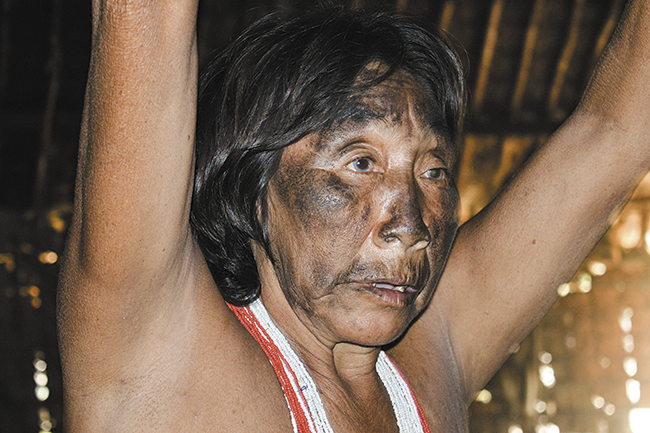 "In the first mission, the main transportation mean was an 8-meter aluminum canoe with a 40 cv motor. In the second mission, most of the commuting hours among the villages was made in a xapi-xapi, complemented by some minutes of daily flights in a bouru-bouru. Only after one hour walking in the Amazon Forest trying to bypass stumps, stones and boughs is that I perceived that xapi-xapi was an onomatopoeia of the sound of the flip-flops beating in the heels of the walkers – or of our body pressing the leaves and sand in the soil –, and only after some hours waiting is that I understood that bouru-bouru was the sound of the chopper approaching the village". 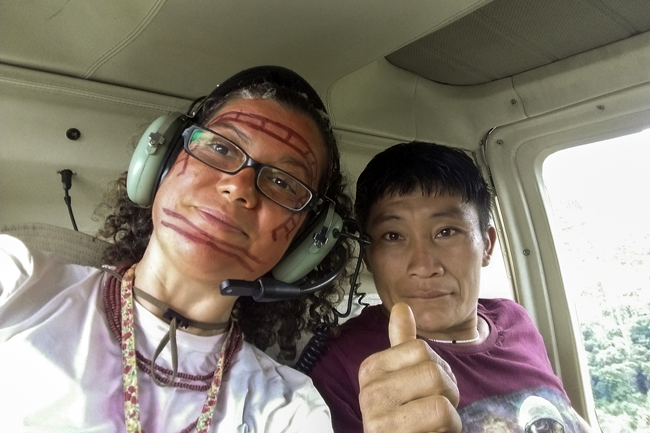 "It was also important to pinpoint some words that help to monitor the translation, though it was a hard task. In the case of the Census of Agriculture, learning the name of the major crops produced and harvested helped us to stimulate the answer, as the case of the word 'naxicoco' which means 'cassava' in Yanomami."

The contact with the Sesai and Funai personnel was key to plan the missions, with more precise information on the location of the Indian communities/villages – including those that moved due to conflicts –, best transportation means, commuting time and cultural specificities.

"The use of the Sesai bases is key to the success of the mission; without them it would not be possible to spend much time in the field. We cooked, slept and used the bathroom, either internal or external; in some bases, we bathed in the river. The DMCs were also loaded there, sometimes in the radio battery, thanks to some cables that were lent. Our clothes were also washed in the bases, in creeks or in the river".

"We had access to the administrative records of amount of families, names and birth dates, since our informants hardly provided their age and the documents were not always at hand, besides a particularity of the Yanomamis of not mentioning their names. Moreover, many children do not have a name up to a certain age, which jeopardizes the enumeration process. (...) An important care is confirming whether all those who died had their names removed from the list, as mentioning the name of the deceased is an insult to a Yanomami and may cease the interaction with the whole village". 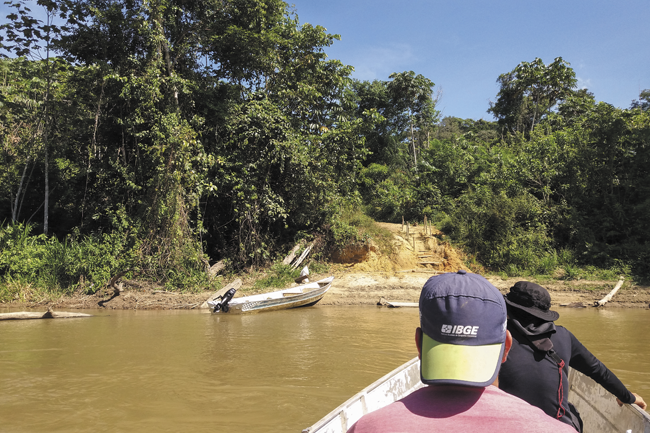 "In the first mission, my team comprised only men [in spite of Antunes asking for a female enumerator or supervisor, she was informed that no woman in Alto Alegre was interested]. In the second mission, I could choose the enumerators. The presence of a woman in each team was very important to interact with the women in the villages. Differently from the first mission, it allowed demographic questions like those of fertility".

"In the meantime between the end of the enumeration and the arrival of the bouru-bouru, women, teenagers and children got close and started to interact, even not speaking the same language. The first questions asked whether I was a mother and whether I had a kurumim (baby) in the belly, besides trying to understand what I was using to cover my breast. They did not understand why I used too much clothes and laughed a lot wondering how was my body under those fabrics, smelling, feeling the texture of the fabrics and asking to teach words in Portuguese, which they repeated skillfully".

"I close these fragments of my field diary with a Yanomami expression which is 'totihi mahi', which means 'very cool', as it synthesizes the experience to be among the Yanomami in these two missions". 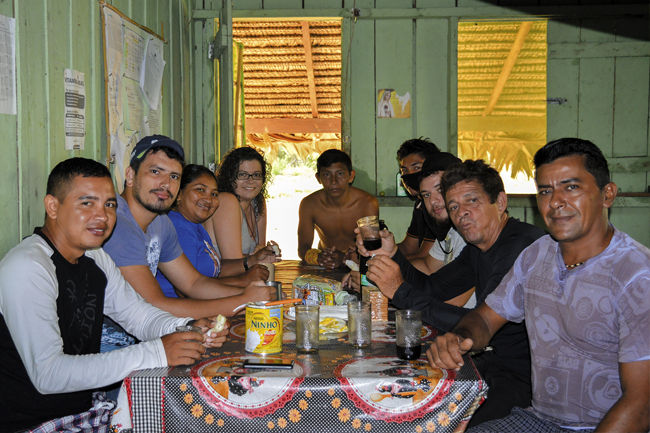