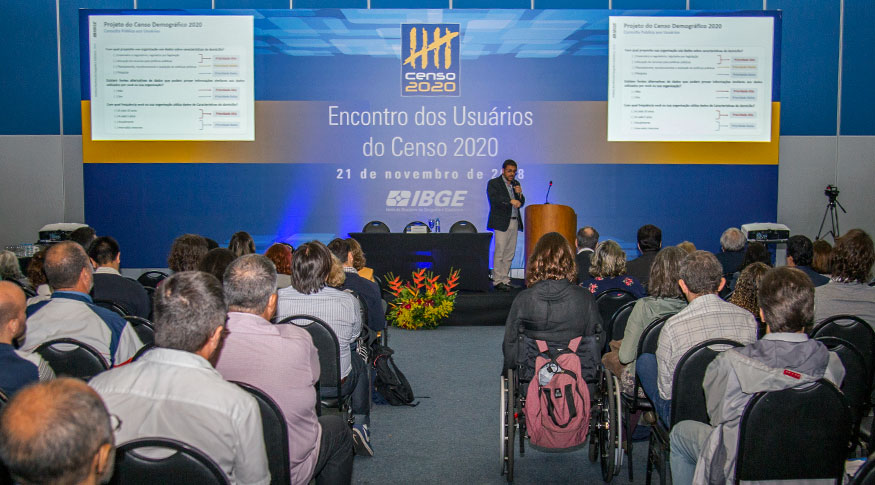 Nearly 100 representatives of the public sector, civil society and the IBGE gathered together this Wednesday (21), in Rio de Janeiro, to get to know the procedures for the 2020 Population Census, and the results of the public consultation carried out on the Internet, which had 3,198 inputs from February to May. Before the year finishes, the preliminary questionnaire of the Institute's biggest operation will be disclosed for consultation in the hotsite of the 2020 Census, already on the air.

The collection of information about street population was one of the major demands of the consultation and will be partially dealt with in the next Census. Although the street population is not part of the survey's scope, the answer options for those who live in collective households or improvised homes will be improved, according to IBGE Director of Surveys, Claudio Crespo: “It won't be a Census for the non-householders, but we can have a profile of those living in shelters. Today, this kind of data is available for some municipalities, but the majority of them do not have this information well collected, so we can move forward in this direction”.

Other suggestions also stemming from society, like the inclusion of questions on the gender identity and domestic violence, do not fit the criteria used for a population census, but can be inserted in other IBGE surveys. “There are international guidelines and studies that demonstrate that this kind of survey is not compatible with a census model, which has one resident of the household as a respondent.”, says Crespo, who expects to address the issue of domestic violence in 2021, in the National Survey of Demography and Health.

Glaucia Pereira, director of Finances of the Cidade a Pé - a civil society organization of São Paulo, took part of the event and mobilized hundreds of organizations in the country during the period of the public consultation: “we wrote a letter for the IBGE and called up the organizations we knew to come up with ideas. In the end, we had 52 groups from all over Brazil sign the letter to ask specifically about urban mobility.  It is a cross-cutting theme, because everybody has to commute to study and work”, she added.

At the meeting's opening, the IBGE president, Roberto Olinto, emphasized that the Census conduction is provided by Law and that the project is not expensive, considering the reach of the results. Olinto showed that the operation requires R$3.4 billion, which corresponds to R$16 per inhabitant in a population estimated at 212.2 million persons in 2020. “We have been working in the National Congress in order to make senators and congressmen aware of the impacts in case the census is not carried out. Internally, we are set out to conduct the Census”, he says.

At times of budget restrictions, the schedule was shortened with two big actions set for next year. “In March 2019 we'll have the second pilot test, and, in September, the experimental census. There will be several actions, the Geosciences teams have already begun the updating of the mapping and address files together with the state branches”, says Operational Coordinator of Censuses, Maria Vilma Salles Garcia.

The United Nations Population Fund (UNFPA) is a long-term partner of the IBGE, we have a very consolidated partnership for Censuses, mainly in the South-South cooperation area, helping other countries to carry out Population Censuses, and, in addition, we are in charge of following the international agendas, which use many of these data to produce indicators, and the IBGE has led, here in Brazil mainly, the follow-up to 2030 Agenda. So, we have this focus on discussing, seeing whether the indicators set out in 2030 Agenda and the SDGs are covered and susceptible of being followed up based on surveys and also on the Population Census.

We are very concerned about the most vulnerable population groups, such as the indigenous people, quilombolas, and we have been discussing a lot about it with the IBGE to see how data production can contribute to the monitoring of indicators and to the development of public policies.

The data collected by the Census are very important to some investigations that are impossible to be carried out only through administrative records. For instance, an issue that matters to us is how much social security can contribute to the fight against poverty by means of pensions paid. They are social security benefits, which are retirement pensions basically. We are not able to measure this kind of information just looking at administrative records; we cannot estimate, through this data, peoples' lives in their households and families. Now, with the Census we can see that and emphasize the social perspective of social security, not only in terms of providing income after the workers' active life, but also contributing for them to have an income to make a living and fight against poverty.

The expectation is for the Census to provide us with information that we can work on for the years to come, and mobility is a cross-cutting theme because everyone has to go out to study, to work. Those who watch television know it is a theme discussed in several news programs in the country, there is the traffic coverage, there are people waking up early and spending hours on public transportation. Those who go on foot to school or work lack sidewalks, riders do not have a bike path... So we hope that, with this type of information, we will be able to come up with public policies to improve life in cities in the coming years.

Glaucia Pereira, Finance Director of Cidade a Pé, an association for mobility for peolple who go on foot in São Paulo.