27,7 million persons are underutilized in the country's workforce

Labor underutilization was 24.7% in the first quarter of 2018, reaching 27.7 million persons. This is the highest rate in the series started in 2012. The data are in the Quarterly Continuous Pnad, released today by the IBGE, which also shows that the discouragement also reached the highest levels of the series, with a contingent of 4.6 million persons and a rate of 4.1%.

The composite underutilization rate of the workforce aggregates unemployement, time-related unemployment and potential workforce. Discouraged persons, which are under potential workforce, comprise people who were out of the workforce for one of the following reasons: they could not find a job, or had no experience, or were very too young or old, or didn't find a job nearby - and,  if they had gotten a job, they would be available to start. 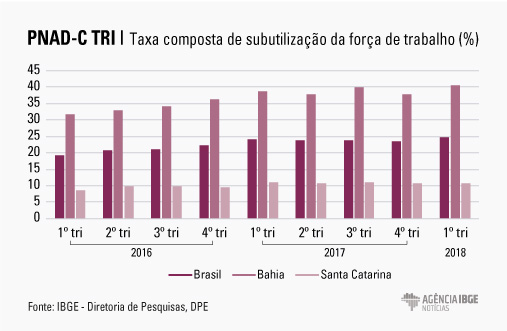 IBGE's Labor and Income Coordinator, Cimar Azeredo, explains that, although the number of unemployed fell by 3.4% in relation to the first quarter of 2017, the underemployed population grew by 17.8%, and the potential workforce, 10%. "What mainly drove the underutilization rate of the workforce was the discouraged population, which went from 4.1 million to 4.6 million, an increase of 12.4 percent," he said.

According to Cimar, despite the reduction in unemployment against the first quarter of 2017, the picture is not encouraging, as "this reduction in unemployment is due to the increase in other forms of underutilization. This shows how important it is to survey those indices, especially when we know that the profile of the discouraged is focused on the low income, young, black and brown population," he says.

Among the states, Bahia had the highest rate of underutilization (40.5%) and Santa Catarina, the lowest (10.8%), in the first quarter. Alagoas recorded the highest rate of discouragement (17.0%), and Santa Catarina and Rio de Janeiro, the lowest (0.8% both). Cimar also pointed out that the underutilized population grew, in one year, 21% in Rondônia, 14% in the Federal District and 10% in Pernambuco. "In the Federal District, discouragement grew 123%," he highlighted.

In the quarter, unemployment rate increased in all Major Regions

Cimar also pointed out that, in relation to the first quarter of 2017, the number of self-employed increased significantly in ten Federation Units. "This shows a the market is becoming precarious. Among those regions are São Paulo, Rio de Janeiro and Minas Gerais, states considered economically strong," he concludes. The other Federation Units that had increase were Acre, Rondônia, Mato Grosso, Ceará, Santa Catarina, Rio Grande do Sul and Amazonas.