The Gross Domestic Product - GDP rose 1.0% in 2017, reaching R$6.6 trillion. Released today by the IBGE, the data point out that this result was due to the 0.9% expansion of the value added at basic prices – comprising the activities of agriculture, industry and services – and to the 1.3% rise in volume of the excise taxes. The savings rate in the year registered the first upturn since 2013. 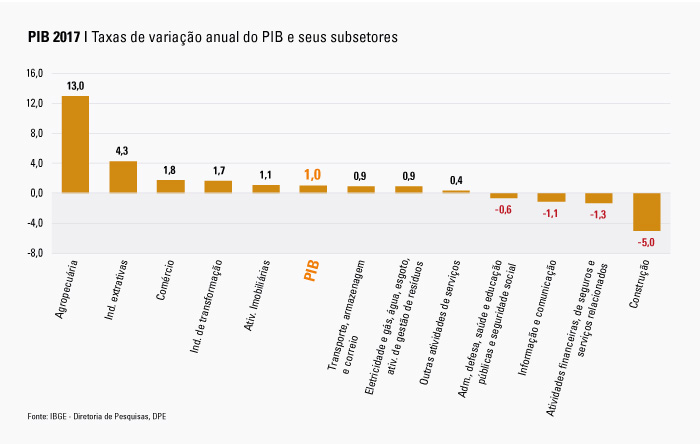 Among the activities, agriculture and livestock farming recorded the highest growth in the year (13.0%), mainly due to Agriculture, highlighted by the expansion in the national output of corn (55.2%) and soybeans (19.4%). "Despite the smaller relative weight, the record harvest represented the major contribution to the positive result of the GDP in the year", explains Rebeca Palis, IBGE´s coordinator of National Accounts.

Services, which hold the bigger weight in the composition of the GDP, posted a positive change of 0.3%, influenced by the growth in Trade (1.8%) and Real estate activities (1.1%). Although Industry, in general, remained stable between 2016 and 2017, the positive highlights were mining and quarrying (4.3%) and manufacturing industries (1.8%).

The volume of the excise taxes, particularly the ICMS, IPI and imports tax, contributed with R$991.4 billion to the growth of the GDP in the year. "It is important to stress that they are taxes on the production and flow of goods and services. The increase in volume reflects the increase in the output in the year, as seen in mining and quarrying and manufacturing industries, as well as in Agriculture. These taxes are part of the final price of goods and services that comprise the consumption of households", concludes the coordinator of National Accounts.