Because of many natural barriers found in the Brazilian territory, hard-to-reach areas are a common occurrence in the Census of Agriculture. They are properties surrounded by forests, rivers of even very far from urban centers. In spite of such difficulties, however, the survey has been advancing: more than 3.1 million stablishments have already been visited (60.4% of the estimated total) in a period of three complete months.

An example of a hard-to-reach property was found by enumerators Erivan Barbosa and Jaine Pires at the end of a road on a hill of about 10 km, surrounded by grass, ruins and some abandoned houses in Baixa Verde, in the municipality of Livramento de Nossa Senhora, in the southwestern area of Bahia. The establishment has 46 hectares very well taken care of and with a great variety of agricultural products, a scenery that surprises all those who would not expect to find there any resident or or agricultural production.

"At a given moment, we thought of coming back, but I knew I should reach the end (of the road) at least, because it was part of my (enumeration) area", says Jaine, as she recalls that in some locations she had to get off the motorcycle and push it. "A total 80% has been enumerated; some people said that villge was abandoned, but there was one only resident, a cattle raiser. We went there to see the place Aand found that producer alone, since the other 15 had left the place about 20 years before because of the drought", says Erivan, as he adds that the village, besides being isolated, has o electricity.

The resident that remained in Baixa Verde was Manoel Messias, age 55, who takes care of 36 cattle head and grows watermelon, pumpkin, coconut, umbu, passion fruit, and produces milk and cheese. He also sells homemade cream cheese in the neighboring village, called Gado Bravo, located 5 km from his home, a distance he travels on foot, by horse or by bike. 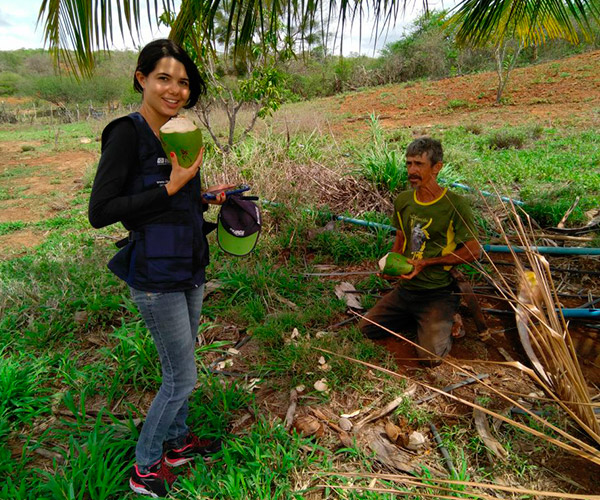 Enumerator Jaine is received by Manoel, in Bahia

This story reflects, on the one hand, the operational complexity of a Cenus of Agriculture and the challenges faced by the enumerators in the data collection phase. On the other hand, it makes clear the importance of the survey as it gives visibility and includes in ational official statistics such hidden realities as that of Baixa Verde.

Out of the 3.1 million establishments visited all over the country in three months of Census of Agriculture, moe than 445 thousand ones were have been counted in Bahia – a little more than 58% of what was expected for the state, which has the biggest number of properties of that kind in Brazil. In Livramento de Nossa Senhora, the enumerating teams had a total 18 persons, with 14 enumerators, who have visited almost 60% of the 4,8 thousand expected areas.

Besides showing the contribution and relevance of Agricultural activity for the economy of the country and the state, the Census of Agriculture also evidences somenthing incredibly value, though untangible: the love for the land, which makes producers dedicate their whole lives to working in the field, no matter the difficulties. That is an inspiring and motivating feeling.

"He was the only resident who really loved the land and what he did there. His pumpkins and watermelons had twice the size of those of other producers. We were very touched by his love for that land. All the others left, but he didn't", says Erivan, she told us that Manoel's wife, who lives in another village, visits him once a month to help with the work.

The "solitude" of Manoel resulted in a three-hour conversation. "A story, a case at each reply", recalls Erivan, revealing the difficulties faced to conduct the Census in certain regions, sometimes because of the difficult access, sometimes because of the questionnaire itself, for despite the objective questions the interviewees also find some time for stories, secrets and emotional outbursts.

"In terms of productivity, it was difficult for me to take so long (to fill out that questionnaire), but it was an unusual experience, it didn't fell like a wok environment. It was very worthwhile to spend to those three hours", states Jaine, who regularly spends 30 minutes on each questionnaire, depending of the amount produced in the establishment. "I though of giving up (working in the Census of Agriculture). What made me stay was the warm way I am welcomed by persons and the stories told. Those give me the energy and strength to go on.

Energy is always welcome, for there are still 300 thousand establishments to be visited in Bahia.