Besides seasonal trade, informal labor maintained the upward trend registered in the last months and contributed to the drop of unemployment in the quarter ended in November. According to the Continuous National Household Sample Survey: Monthly Edition - Continuous PNAD, released this Friday by the IBGE, the rate stayed at 12.0% in this period, below the 12.6% rate of the quarter ended in August. Even so, the November index was higher than that in the same period of 2016 (11.9%).

As an example, the number of workers with a formal contract fell 2.5% in relation to the September-October-November 2016 quarter, a drop of 857 thousand persons. On the other hand, workers in the private sector without a formal contract increased 6.9% in the same comparison, absorbing 718 thousand persons. Those self-employed also rose (5.0%), whereas domestic workers increased 4.1% over 2016.

The positive change of 0.1 percentage points (p.p.) in unemployment in relation to the same quarter a year ago points out, for now, just a drop in the upward trend registered in the previous months. The deceleration of the rate can be perceived by the evolution between the quarters ended in November 2016 (11.9%) and 2015 (9.0%), when the difference had been 2.9 p.p. 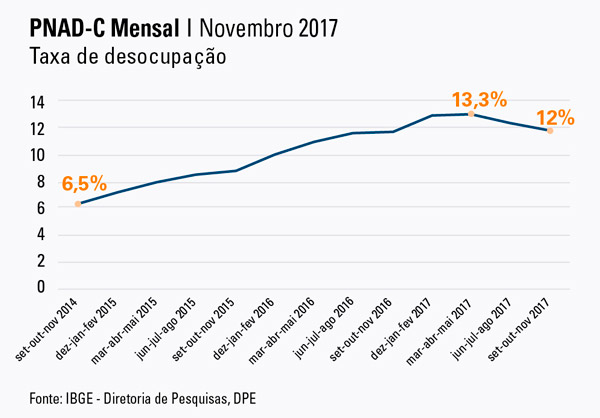 "Unemployment is still higher than last year, though this increase clearly decelerated in the annual comparison. We don´t have a smaller number of unemployed persons, yet it decelerated", explains Cimar Azeredo, IBGE´s coordinator of Labor and Income.

Conversely, the comparison with the same period in 2016 highlights the increase in the employment-population ratio, which is the percentage of employed persons over 14 years of age. Last year, the index had stayed at 54.1%, whereas it hit 54.4% in 2017.

"The employment-population ratio rose because the number of employed persons increased more than the population at working age. Nevertheless, this figure has to be seen with cautious, since at the same time that the increase in the unemployment rate decelerated, the quality of employment dropped. The labor market is increasingly geared towards informality", concluded Cimar.