[Retratos] SDG 2 promotes sustainable agriculture and the fight against hunger

To achieve food security and promote sustainable agriculture are essential actions to ensure the progress of a nation. Policies aimed at the valuing of agricultural producers, the fight against hunger and the reduction of the obesity. André Costa and Octávio Costa, researchers from the IBGE, in charge of the Sustainable Development Goal 2 (ODS 2), comment on the challenges that lie ahead and the role of the IBGE in this process. 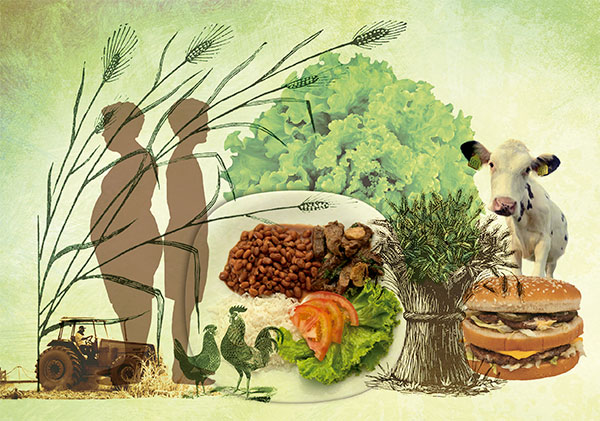 Retratos Magazine: Is hunger still a problem in Brazil?

André Martins: The surveys conducted by the IBGE and by other institutes have evidenced that Brazil is no longer part of the world hunger map. It is clear that our studies might show the existence of groups suffering from malnutrition, but that problem is not due to unavailability of food. The most probable explanation is the existence of local deficiencies in distribution management, or of temporary difficulties, such as an unemployed head of household, for example. But since the end of POF 2008/2009 (Consumer Expenditure Survey), we have seen quite the opposite. People are eating more, but inadequate food. The intake of processed food has increased enormously, and brought problems such as obesity - which, like hunger, is a serious problem.

Retratos Magazine: In your opinion, can Brazilian agriculture be considered sustainable?

Octávio Costa: Dependending on the criteria, no agriculture can be considered 100% sustainable. Although a concept of sustainable agrictulture was conceived by FAO (Food and Agriculture Organization of the United Nations) in 1988, indicators of agriculture sustainability are still a reason for discussion and controversy. The idea of having aimes and indicators is useful to monitor the evolution of agriculture towards more sustainable practices throughout time, allowing the comparison with other countries. In the case of Brazil, I think Brazil has not yet reached sustainability, but we have evolved in comparison with previous decades. Our productivity has increased, I mean, we are now using a smaller area to produce the same amount of food. That means reduced deforestation and the incorporation of lands to the productive system, in order to maintain or increase food output.

Retratos Magazine: What surveys on the nutritional status of the Brazilian population are already conducted by the IBGE?

Retratos Magazine: What about agricultural production?

Octávio: Our current production only partially fulfills the demands for indicators. We have some information on agricutural production and productivity from the 2007 Census of Agriculture. The Census of 2017 will provide many of those data.

Retratos Magazine: What are some of the challenges for the IBGE in these fields?

André: In the field of food production, the main challenge is to keep the current surveys and create new ones, on a regular basis. The ideal solution would be to turn POF, which is conducted every five years, into an annual, simple survey, but we know that solution means high costs.

Octávio: Regarding agriculture, we still need to delve into indicators and plan future surveys to fulfill many demands. aIt is also necessary to think of post-Census of Agriculture surveys to feed the indicators established by the UN and monitor the evolution of the SDG 2. Not all information comes from surveys, but also from administrative records provided by the government, for example, data from the Central Bank and estimates of expenditure on agricultural inputs and on rural credit. Establishing partnerships is also a challenge for the IBGE.