More than half of the children and teenagers aged 5 to 17 years old worked at home taking care of people or doing household chores, according to the Child Labor module of the Continuous Pnad 2016, released today by the IBGE. The survey showed that 20.1 million children dedicated, on average, 8.4 hours per week to those activities.

Besides care taking and household chores, subsistence work was also identified by the survey, and it was carried out by 716 thousand children, for 7.5 weekly hours on average. 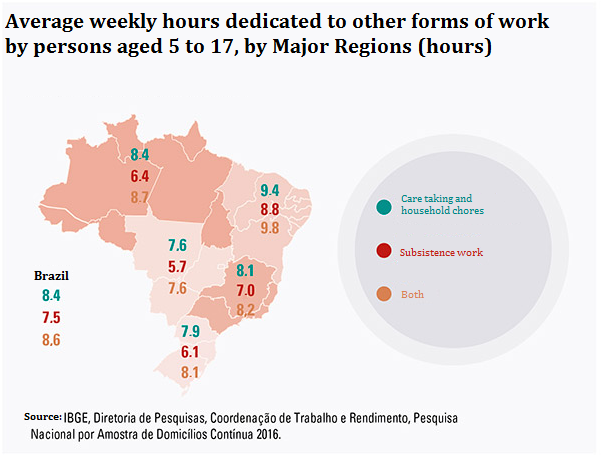 Survey analyst Flávia Vinhaes highlights that there is not, in Brazil, an official criterion to determine the number of maximum hours allowed for children to carry out those non-economic activities: "if the activities are heavier or take long periods of time, they are also related to child labor and must be eradicated because they affect the child’s performance at school, lead to school evasion and can harm the child's health".

Since childhood, household chores and care taking are female tasks

Girls aged 14 to 17 are more involved in care taking and in household chores than boys. The former dedicated, on average, 12.3 hours per week, whereas the latter spent 8.1 hours, according to the survey. Even among the younger groups, girls spent more time in those chores. 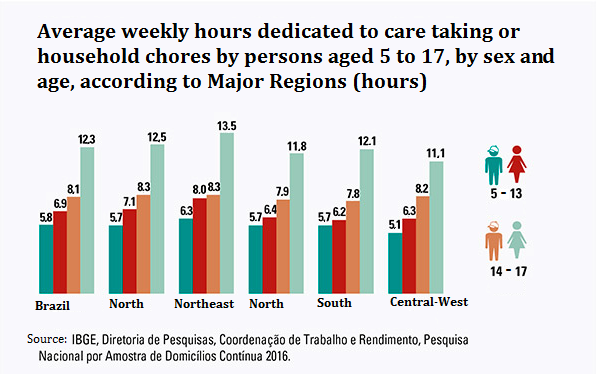