The 3.5% drop in the national GDP in 2015 was spread along every state in Brazil, including the Federal District. These data come from the Regional Accounts, released today by the IBGE. The simultaneous drop in every Federation Unit is an unprecedented event in the survey, whose time series began in 2002.

"This drop in every Federation Unit is the first-of-its-kind, even if we consider any other time series estimated by the IBGE before this. It is an unprecedented result, affecting every state in the federation", explains Frederico Cunha, manager of the Regional Accounts.

Having its GDP volume reduced by 0.3%, partly explained by the good performance of the local agriculture, which increased 10.1% in this period, Mato Grosso do Sul was the Federation Unit that registered the best performance in 2015. Nevertheless, the sectors of Industry (-4.4%) and Services (-1.6%) definitely brought the state rate down. 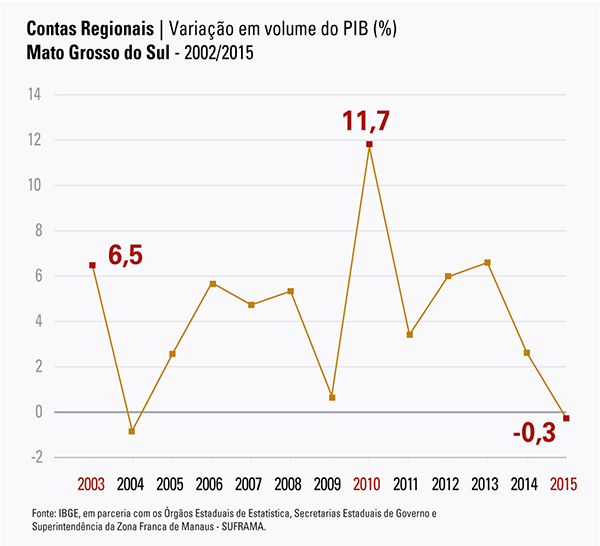 Having registered a -5.5% rate, Amapá was the state that reported the biggest GDP reduction. The major negative contributions came from the sectors of Industry (-16.9%) and Services (-4.1%). They were pushed downward mainly by the activities of Construction (-17.9%) and Trade, maintenance and repair of motor vehicles and motorcycles (-14.5%).

"The Southeast Region is the only one to lose share in the 2002-2015 time series. Indeed, every state in the North, Northeast and Central-West Regions gained share, except for Alagoas, the Federal District, Amazonas and Sergipe. The advance of the agricultural frontier, among other factors, led Mato Grosso to gain more share. Santa Catarina and Pará also gained a lot of share", explains the survey manager.