With a high of 1.4% in 2016, against the previous year, the national inventory of cattle registered the mark of 218.2 million head, the greatest one since 1974, when the time series began. The Central-West Region concentrated 34.4% of the national cattle, with a highlight to Mato Grosso, which has 30.3 million head (13.9% of the total), a growth of 3.2%. Minas Gerais, Goiás and Mato Grosso do Sul represented, respectively, 10.8%, 10.5% and 10.0% of the national inventory. Among the 20 municipalities with the biggest inventories, 13 were in the Central-West, sis in the North and one in the South, with São Félix do Xingu (PA), Corumbá (MS) and Ribas do Rio Pardo (MS) with the greatest herds.

The information above is provided by the Municipal Livestock Survey (PPM), which investigates animal farming and other productions, as milk, wool, hen eggs and honey. Analyst Mariana Oliveira from the IBGE explains the regional context that contributed to the survey's result: “Herd expansion in the Central-West is a consequence of the land size, which favors the farming of large animals. Besides, it is close to the slaughter industry and to grain producing farms,” she adds. 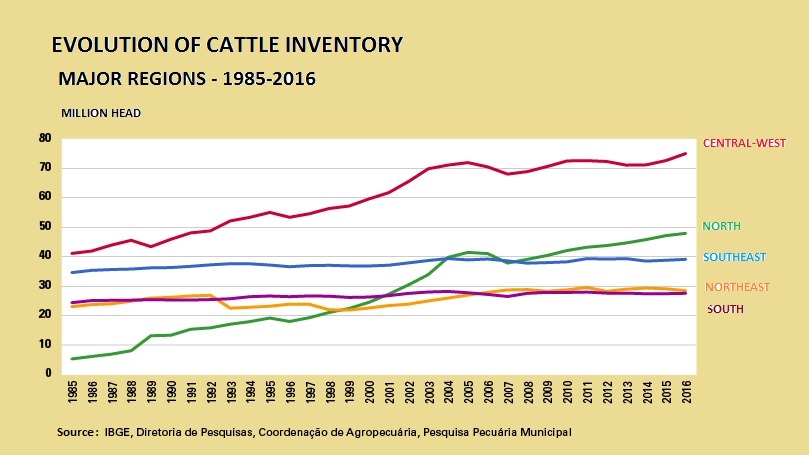 The North Region, with 47.9 million head, had he second biggest inventory of the country, with a high of 1.7% in relation to 2015. According to Mariana, "cattle moved North due to the low land prices, to abundant water resources and favorable weather". Low highs were also registered in the Southeast (0.8%) and South (0.5%), besides the drop in the Northeast (-2,1%). As Mariana puts it, “herd reduction in the Northeast could be caused, among other aspects, by unfavorable weather conditions”, she highlights.

If, on the one hand, cattle herds stand out in the PPM in animal farming, on the other hand, honey, with 39.59 thousand metric tones, stood out in production: a high of 5.1%. This growth was also registered in financial terms, with R$ 470.51 million, an increase of 31,5% in relation to 2015. The South Region represents 43.1% of the national production of honey, with the municipality of Ortigueira/PR as its biggest producer, followed by Itatinga (SP) and Arapoti (PR). About the increase in the production value, Mariana says it “was a consequence of the growth of honey demand, since it is now considered a healthier product”.