Output of acai berry amounted to 1.1 million metric tons in 2016

According to the Municipal Agricultural Survey (PAM), released today, from 2015 to 2016 the national output of acai berry increased from 1.0 to 1.1 million metric tons. The IBGE is now investigating acai crops in an agricultural survey for the first time. Results show that Pará was the main producer among the Federation Units, accounting for 98.3% of the national output. The 20 biggest producing municipalities are located in that state, the main highlight being Igarapé-Miri, the main national producer, with 305.6 thousand metric tons and 28.0% of the output in Brazil. Together, the five main producing municipalities (Igarapé-Miri, Cametá, Abaetetuba, Bujaru and Portel) account for 62.7% of the state production. 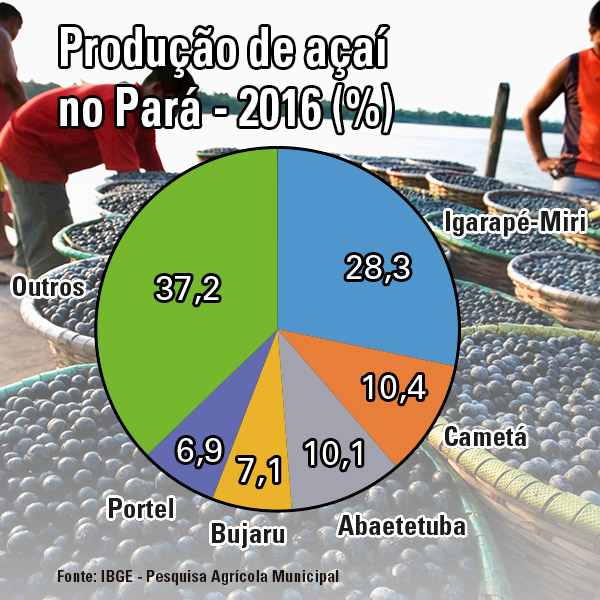 Among the municipalities, Petrolina (PE) accounted for the biggest contribution to the value of national output. The crops of grapes, mango, guava and banana are highlights in the municipality that had 1.9% of the national value of fruit. Petrolina is located in the São Francisco Valley, one of the most important regions for national fruit farming.

According to Larissa Leone, supervisor of the survey, eight products accounted for the increase in output value, in order of relevance: orange, banana, lemon, apple, papaya, tangerine, melon and nuts. “The increase in the output value resulted from the decrease of world and national stocks of orange. As Brazil is the main producer and exporter of orange in the world, the decrease of stocks represents a reduction of exports, and, as a result, the rise of its price in the international market. The other citrus fruits follow the same trend as that of orange, the flagship of this group”.  Banana and apple, on the other hand, were affected by the cold which led to the decrease of productivity of both crops.

São Paulo is the main state in terms of participation in the output value, with 16.4% of the national total, an increase of 1.4% over the previous year. Among the municipalities, Sorriso (MT), the main national producer of soybeans and corn, accounted for 20.8% of the output value of agriculture in the state of Mato Grosso (MT). It also took the leading position in the ranking of value of national agricultural output, with R$ 3.2 billion, increase of 28.3%, surpassing São Desidério (BA), whose output fell by 33.5%.