In 2021, considering poverty lines set by the World Bank, about 62.5 million persons (or 29.4% of Brazil population in the country) were living in poverty. Among those, 17.9 million (or 8.4% of the population) were living in extreme poverty. Those were the main figures and highest percentages in both groups, since the beginning of the series, in 2012. 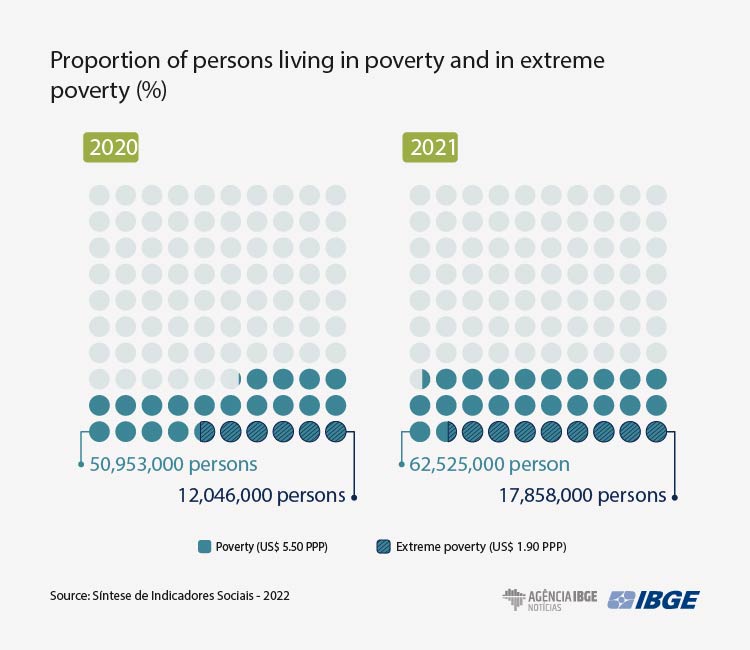 In 2021, the proportion of children under 14 years of age below the poverty line reached 46.2%, highest percentage in the series that started in 2012. This proportion had fallen to its lowest level (38.6%) in 2020, but had a record increase.

In the regional analysis, the Northeast (48.7%) and North (44.9%) had the biggest proportions of poor persons in their population. In the Southeast and also in the Central West, 20.6% (one out of every five residents) were below poverty line. The lowest percentage was registered in the South region: 14.2%. 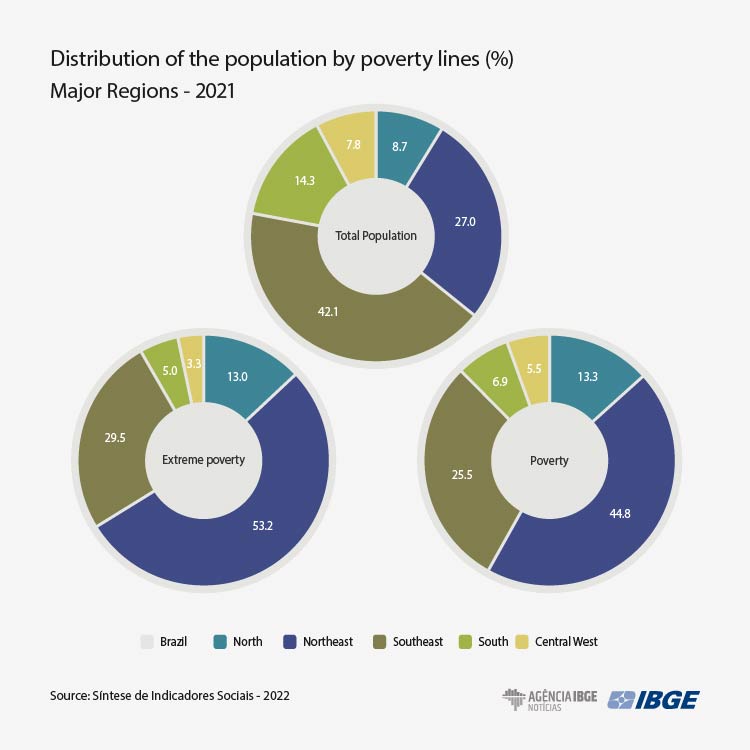 Earnings had smallest participation in the total income of the poorest

Earnings accounted for 75.3% of the total population income, whereas Benefits from social programs made up 2.6%. But among persons earning up to 1/4 of a minimum wage per capita, earnings represented 53.8%, whereas the share from social programs reached 34.7%. “Those are more vulnerable housing units with limited access to the labor market. Therefore, social programs ende up having a bigger impact,” says André Simões, analyst of the survey.

In 2021, per capita average household earnings reached the lowest level in the time series initiated 2012: R$1.353 “A recuperação do mercado de trabalho em 2021 não foi suficiente para reverter as perdas de 2020. This factor, and the reeuction in the Emergency Aid value, may account for the result,” Mr. Simões explains.

Income decreases mostly among women, black and brown persons and in the North and Northeast

Throughout the series, black and brown women remained earning half of that of white persons and that was not different in 2021: R$949 versus R$1,866, respectively. Both earnings fell from 2020, but losses were more pronounced among black and brown persons (8.6%) in comparison with white ones (6%).

Against 2020, all the income strata recorded decreases in per capita average household in 2021, with the first two strata as the main highlights. That is, the stratum that encompasses up to 10% of the persons earning less in the population recorded the biiggest decreases (-32.2%). The following stratum followed, with 19.8%. “In overall terms, it is possible to say these two strata with the poorest population recorded the biggest decrease in earnings, having lost about 1/ to 1/5 of the income in 2021,” Mr. Simões explains. The main decrease was observed among the stratum with highest earnings, which fell by 4.5% from one year to the next.