It was not before a week of heavy rain and mud, at the beginning of October, that the IBGE News Agency reporting team could follow the census operation in a rural sector in the neighborhood of Jaceruba, in Baixada Fluminense (RJ). Japeri on one side. On the other, Nova Iguaçu. Curiously enough, each side of the street belongs to a different enumeration area and a different municipality.

It may be hard to imagine, but there are rural areas 40 minutes from downtown Rio, in Nova Iguaçu, the fourth largest city in terms of population in the state. Adding together the other two neighboring municipalities (Japeri and Queimados), the region is home to more than 1 million inhabitants, divided into 2,136 enumeration areas – 135 of which are rural. Altogether, in the state of Rio, there are 2,626 rural enumeration areas.

“In rural areas, the sense of community is more present than in urban areas. And this sense of belonging is stronger than the political-administrative limits”, explains the coordinator of the area, Felipe Feijó. “So, it is quite common for the same community with social organizations and common living areas to be divided into different municipalities”, he adds.

Farms prevail in the roadside landscape. In the Jaceruba, it is common to find residents who have lived thier whole lives in the area, such as Manoel Mendes, who was the household head of the first house visited on the day. “The one who answered before was my father, now deceased. It is now the second time that I participate in the IBGE surveys”, he commented.

The coordinator Feijó himself is well acquainted with everyone along the way. Born and raised in the Nova Iguaçu region, he has worked in several rural areas on the 2022 Census and other surveys. “The biggest difficulties are related to access, with scarce or absent public transport, in addition to roads that are difficult to travel”, he emphasizes.

Similarly, enumerator Victor Paes indicated displacement as the greatest difficulty. In the sector, he had already walked more than 25 km to complete 108 questionnaires: “Normally, there are no buses, we travel by private cars, motorcycle taxis or on foot”.

On the other hand, there are many stories of warm welcoming from local residents. Invitations for juice, cake. “And many owners of commercial establishments, such as bakeries, offer a cup of coffee, when they see me coming and going, doing the survey”, says Victor. “In addition, the percentage of absentees is usually lower, as there is always someone at home”, adds Feijó.

During the collection at a farm, Feijó and the sub-area census coordinator, Jayme Luiz, witnessed the census agent Monique Castro receiving a duck from the owner of the farm. “She wanted to give the duck boiled, but ended up giving the duck alive”, explained Jayme, who has also received free range eggs and several cakes.

“The landlady just liked me. In the places where I went, people do not always know what the Census is, but they understand that it is important, they are very receptive and always offer something”, explains Monique.

During his work in the region, Jayme Luiz heard different stories of migration. “It was a place where people went in search of tranquility. Because of the construction of the Metropolitan Arch, many of these immigrants moved here. But it is also a place where families come to spend the weekend”, he comments, referring to the roads of the Metropolitan Arch of Rio de Janeiro, which connects the cities of Nova Iguaçu, Queimados, Japeri, Itaboraí, Guapimirim, Magé, Duque of Caxias, Seropédica and Itaguaí. The house that André Sales takes care of is one of them. Housekeeper at his aunt's, he says he comes to spend the weekends with his family. A family property with horses and lots of fish.

According to Jayme, there are many curiosities about the region: they enumerated a household where all 16 children had the same first name: “And they said they would never leave there, they planted what they ate, they hardly bought anything”, he said.

Have you ever heard of an enumerator chased by a dog? With Victor, in the rural area, it was not quite like that. "One day, I was walking near a place with few houses and a little girl started yelling something at me." Before Victor could understand, a rooster jumped on top of him and started pecking at him: "I thought he had stopped and the child yelled 'he's coming back'". Long story short: a pair of pants with holes all over it.

For the superintendent of the IBGE State Branch in Rio de Janeiro, José Francisco Carvalho, rural survey is different: “Large area, a gate, no view of what is inside, sometimes animals. The good news is that the 2022 Population Census uses the same technology used in the 2017 Census of Agriculture, which shows the route and path of the enumerator, with the georeferencing of households and establishments, the coordinates of the questionnaires where they were carried out”, he says. “This avoids errors and fraud”, he guarantees. 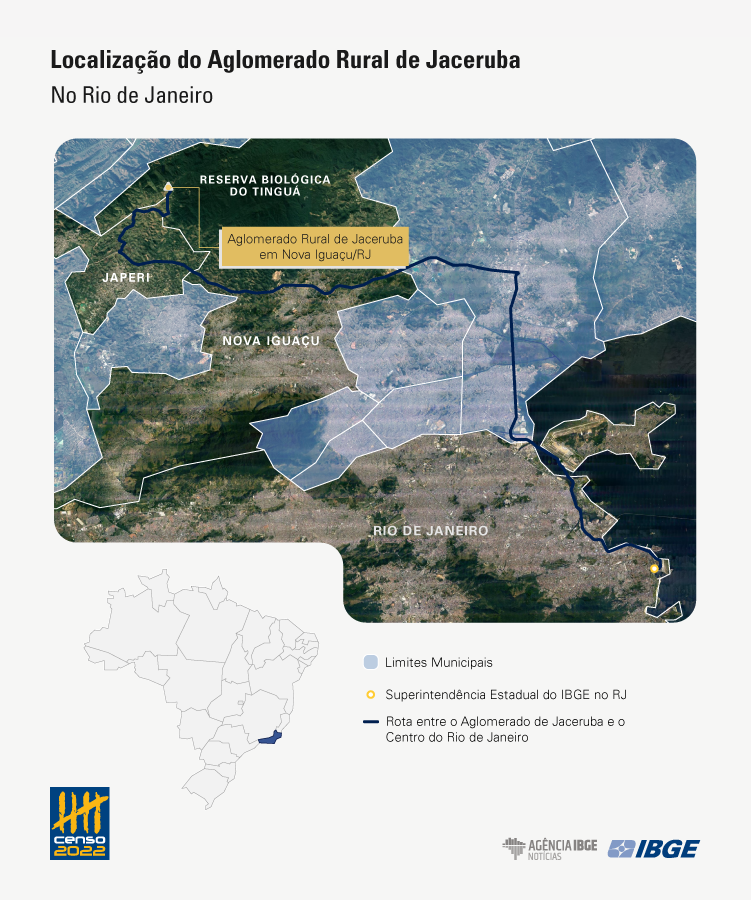 For the Population Census, areas of rural use are places characterized by the dispersion of households and the usual presence of agricultural establishments. “In the Nova Iguaçu area, in addition to the rural areas, there are low-density urban areas and areas of environmental protection”, explains Feijó. “Some municipalities in the Metropolitan Area provide cities with perishable products, such as fruits and vegetables. It is also possible to find small herds,” he adds.

According to ongoing agricultural surveys carried out by the IBGE in 2021, Japeri and Nova Iguaçu have cattle, hogs and pigs and chicken herds, in addition to generating animal products such as milk and eggs. In fact, in 2021, Nova Iguaçu had the highest production of quail eggs in the state of Rio de Janeiro. As a product of their crops, Japeri and Nova Iguaçu grow bananas, produce coconut water, oranges, lemons and cassava. A curiosity is that the municipality of Nova Iguaçu was once one of the largest Brazilian exporters of oranges, between the end of the 19th century and the beginning of the 20th century.

It is also possible to find small family crops, such as those of Cláudio Luiz. Although he lived in other states, he returned to his birthplace after his father passed away. Before inviting the enumerator for lunch, Cláudio showed the machinery and the cultivation of cassava and cupuaçu, which his father had and he kept. “I found it very easy to answer the Census; when I realized, it was already over.”

Nearby, right on the border between the municipalities, enumerator Victor Paes also discovered an “establishment with another purpose”. According to the Enumerator's Manual, Establishment with Another Purposes is a building used for other purposes than the specified options, such as mechanical workshops, banks, pharmacies, offices, associations, stores and commerce in general. It was a collective crop, in an area provided by the landowner.

The person who showed the place was the resident across the street, Rogéria Rocha, who had lived there for eight months: “She had already approached me, wanting to answer the survey, but we had not yet arrived there”, says Paes.

Rogéria explained that some people plant okra, eggplant, beans and corn, to sell at the fair that takes place in the region on Saturdays. She also showed the chaya (spinach-like plant) they grow and prepared juice for the enumerator and supervisor, reinforcing typical rural hospitality.

Walking a little further, after the collective crop, the enumerator found a house with the resident Solano Gabriel: “I have lived here since I was a child, I like it and I am already used to the place”. It was not the first time that Solano answered the Census. For him, it is important to participate: “It is a way of knowing who the people are, how many they are, how they live, to improve public policies”, he summarizes.

Jaceruba has an Environmental Protection Area, created in 2002, entitled APA Jaceruba, in the northwest region of Nova Iguaçu, on the border with Miguel Pereira and Japeri. The place also hosts the Banana Festival, one of the local products. Since 2005, the gastronomic festival has been celebrated, serving delicacies made from the fruit, in order to strengthen the tourist potential of the place and reinforce the rural identity of the region.

In the region, there is also the Tinguá Biological Reserve, created in 1989 to protect the region's natural heritage, with more than 26 thousand hectares and several springs, in an area of ​​Atlantic Forest: "And the Census takes place there normally, as in any rural area. I was careful to go into areas in and around the reserve, with a keen eye, to check it all and not to miss a thing. And we found residents,” says Feijó.

Within the current Reserve, the Maciço do Tinguá was one of the main sources of water used to solve the water crisis in Rio de Janeiro, at the beginning of the 20th century, before the use of the Guandu River water. To take the workers who would work on the construction of the Tinguá dam, the Rio d’Ouro railroad was built, which was later used for passenger transportation. Later, part of its railroad was used in the construction of line 2 of the Rio de Janeiro subway.