Despite the pandemic, number of companies in the market remains positive in 2020

The balance between companies entering and exiting the market remined positive in 2020: 192,0 thousand. In spite of the pandemic, that was the second year with a positive balance, since 2018 (a reduction by 65,9 thousand enterprises). The survival rate (percentage of active companies in 2019 still existing in 2020) was 83.1%.

The data was obtained from the study “Demography of Enterprises and Statistics of Entrepreneurship”, released today by the IBGE. 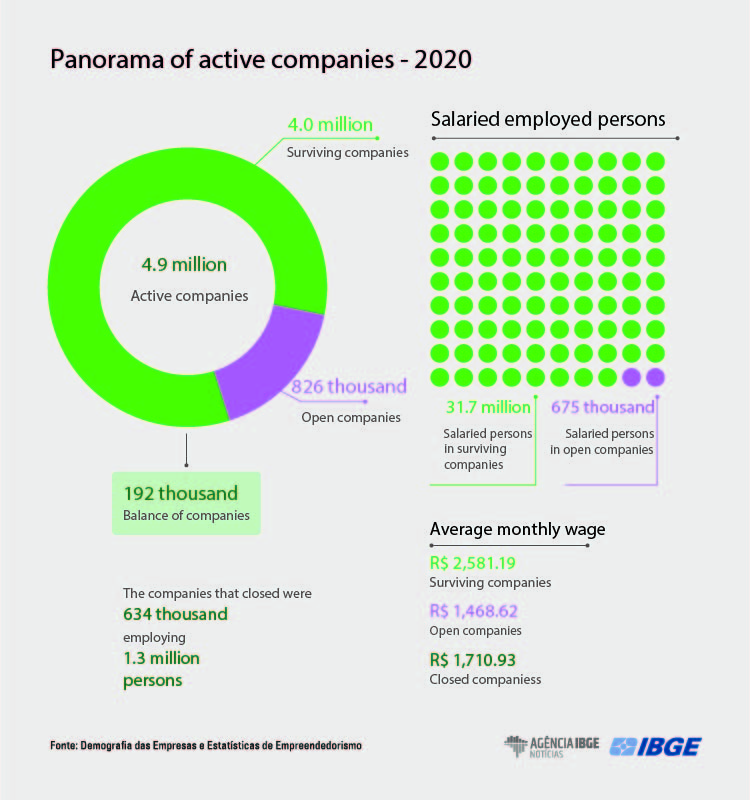 Effects of the pandemic have not been fully observed

The entry rate fell from 20.2% in 2019 to 16.9% in 2020 and the exit rate, from 14.0% to 13.0%. The manager of the survey, Thiego Gonçalves Ferreira, reduction of the entry rate would be an expected effect, but not in the exit rate, which recorded its lowest result since 2008. Nevertheless, the phenomenon was observed in other countries: eight of the 12 nations analyzed reported a decrease in exit from the market.

“Maybe it will take us a little longer to detect all the effects of the pandemic. Some public policies added to company survival, such as the National Support Program for Micro and Small Enterprises (Pronampe). Also, the initial shock caused by COVID-19 was observed in the country from March on. The companies that worked up to that moment, although, even when they ended their activities in the following months, are not part of the exit statistics, due to a methodological question based on international manuals,” Mr. Ferreira highlights.

He explains that the data are surprising and must be considered with caution, especially in comparison with previous years, because the methodology of the survey went through a change in methodology defines active organizations, due to a new registration system adopted by the federal government.

Unlike Cempre (35.3 million companies), Demography of Enterprises considers only active companies that are legal persons as business entities, not including public administration bodies, non-profit organizations and international organizations working in the country. It is worthy of mention that Individual Micro Entrepreneurs (MEIs) are not included in the survey either.

Among the 4.9 million active companies, 4.0 million have survived, that is, they were already active in 2019, which represents a survival rate of 83.1%. A total of 826 thousand companies (16.9%), with most having been born (670 thousand) and 157 thousand reentering the market. Companies exiting the market amounted to 13.0% (634 thousand companies), lowest rate since the start of the time series, in 2008.

Among the 39.4 million employed persons in active companies, almost 96% are in surviving companies. They pay, on the average, R$ 2,581 against R$ 1,469 paid by companies entering the market.

Mr. Ferreira highlights that, in general, surviving companies are bigger sized, besides accounting for most of the Jobs and paying higher salaries, which possibly helps attract more professionals with a higher education degree.

Companies that were closed had the biggest proportion of salaried women

In the total active companies in 2020, 38.8% of the workforce was female. Nevertheless, when analyzed by demographic event, the entering companies employed 40.5% of the salaried women and exiting companies employed an even bigger percentage, 44.1%, being the highest in the time series, “Two sectors that employ mostly women and that were affected during the pandemic have contributed to this result: Lodging and feeding and Education.”

The most relevant sector in the positive balance of 192 thousand companies was Trade, repair of motor vehicles and of motorcycles, with 39 thousand, followed by Professional, administrative, scientific and technical activities (35 mil) and Human health and social services (27 thousand).

“Despite the positive balance of entries and exits, trade was one of the sectors losing most employed persons against the previous year: a drop by 222 thousand, only second to lodging and feeding, which lost 373 thousand persons,” Mr. Ferreira highlights.

The survey also shows details of the migration between sizes in the case of surviving companies. Those who remained in the same range of salaried persons amounted to 88.6%. Only 4.5% reached a higher level, the lowest figure in the series, as well as the rate of companies that reduced their number of employees, 7%. “Since fewer companies changed levels, that indicates a net effect of -2.5%, the second biggest drop in the series,” Mr. Ferreira highlights.

Expansion of new local branches decelerated during the pandemic

Among the Federation Units, Santa Catarina stands out, with a survival rate of 27.6% of the local branches born in 2010. On the other extreme, Acre had the lowest survival rate (13.2%). “Agap of 14.4 percentage points separates the highest from the lowest rate,” says Mr. Ferreira.

“Companies with 250 or more employees were the main contributors to the increase of salaried employed persons. From 2019 to 2020, the participation of these companies went from 8.8% to 9.2% in the total companies,” says Mr. Ferreira.

From 2017 to 2020, salaried employed persons increased by 175.2% in high-growth companies, versus an increase of 13.2% in the group of companies with salaried persons.

As shown in graph 8, the North Region has 1.3 percentage points (p.p.) more in the distribution of high-growth companies than among companies with 10 or more salaried persons, whereas in the Southeast, the opposite is true, with a distribution 1.9 p.p smaller.

“Gazelle” companies are a subgroup of high-growth companies formed by newer entities, having existed 3 to 5 years in the year of reference and that have average annual growth above 20%, in a period of three years.