This Wednesday (17), the IBGE is working on the Mobilization Day for the Quilombola Census, official opening event for the Population Census in these communities all over the country. All the dissemination activities have been agreed upon in partnership with the National Coordination of rural Quilombola Communities (Conaq). The data marks the presentation of the census operation methodology in these areas, employed so that leaderships will open their communities for the quilombola population to answer the 2022 Census.

“Our main objective is to have the population answer the Quilombola Census, the first edition the IBGE will present to society with official statistics about how may wuilombolas there are in Brazil, where and how they live. It is important that this poppulation be prepareed and aware of this possibility of having their reality described by the IBGE for the first time. Another objective is to mobilize quilombola leaderships so that they open their communities and welcome the enuemrator. The third objective is to make society aware of this great advance introduced by the 2022 Census: the inclusion of one more of our traditional communities and peoples,” says Marta Antunes, head of the IBGE’s Census of Traditional Peoples and Communities.

One of our main challenges was to select a question for the person to understand the questionnaire and be self-identified as a quilombola. Ms. Antunes explains that the question on community belonging will be available in pre-defined areas, geographically controlleed, considering this is the first attempt at portraying this population.

“The main challenge in mapping the quilombola population in pre-defined areas had to do with census cartography. Besides the officially established territories - according to data from the National Institute for Colonization and Agrarian Reform (INCRA) and of the state land institutes - we also tried to portray all quilombola communities out of these territories and in all localities where there might be quilombola residents,” Ms. Antunes says.

The total identification amounted to 5,972 quilombola localities and 2,308 settlements - those with 15 or more residents in one or more closely-located housing units and where people are related or share community ties. The Census will visit all quilombola territories, communities and localities. The communities, housing units or localities that happen not to be identified during mapping will be included in the database by enumerators for underreporting. 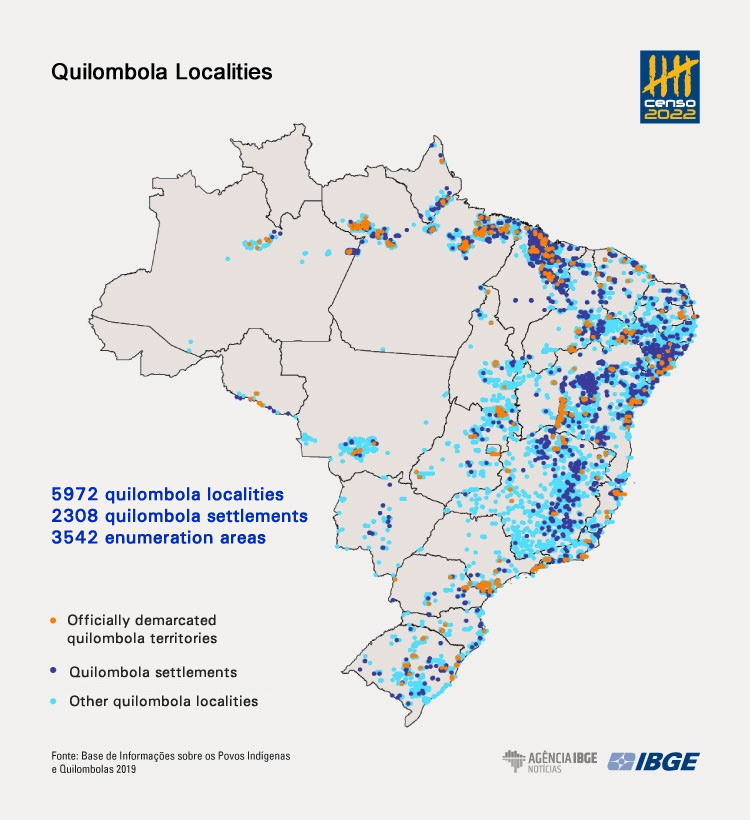 Another important step was designing enumerators’ training In order to make people comfortable in answering the Census, it is important that they understand their identity and type of social organization will be respected. To reach this goal, it was necessary to prepare the enumerators to deal with diversity and alterity when arriving at a quilombola territory or community. Besides the five-day training of enumerators held all over the national territory, there was an additional day for those who will enumerate quilombola areas. These enumerators will also follow health protocols such as absence of symptoms, use of masks and of hand sanitizer.

“There was also an attempt at sensitization of quilombola leaderships and in data collection there will be meetings whenever the enumerator gets to a community. In case it is necessary, the leaderships can call in a guide from the community, when the enumerator is not a quilombola or when the area to be covered is very big,” Ms. Antunes adds.

The Population Census will produce an unprecedented portrait of the reality of quilombolas and their communities. The survey will show the way of living of the wuilombola population, their different forms of social organization and huge cultural richness. With the census, the government and civil sociey can work to guarantee better living conditions for these communities. And, in order to improve data collection, quilombola communities the IBGE enumerators will have approach leaderships and explain what the Population Census is. They will also seek support from leaderships and community members to carry out data collection. Then, the enumerators will visi all the homes to conduct interviews with resident families.

“All the project for the Census in these communities were subject to consultation and participation of the civil society organization that represent quilombola communities – Conaq – and of the institutional cooperation with bodies of the federal government that work in quilombola policies: National Secretariat for Racial Equality Promotion Policy (SNPIR), National Institute for Colonization and Agrarian Reform (INCRA), Palmares Cultural Foundation, state land institutes, Ministry of Education and Ministry of Citizenship with the Unified Registry. All these organizations gave support to the process of defining the census methodology to suit the quilombola population,” says the coordinator.

It is worth pointing out that the Population Census, as an administrative act by the Brazilian government with an impact on the quilombola population, is subject to Convention 169 by the International Labor Organization, and, therefore, the IBGE complies with the need of free, prior and informed consent from this population.

Consultation for the current Census has taken place since 2018 when the inclusion of the quilombola population was presented as well as the results of tests about questiona that might work or not to portray quilombolas.

With respect to Convention 169 and, in compliance with good practices of statistical production, the IBGE considers as a quilombola every person that is self-identified as a quilombola as well as the persons who are absent from the housing unit at the time of the interview. The eunumerator will ask: “Do you see yourself as a quilombola?” In case the answer is affirmative, a second question is asked: “What is the name of your community?” To define a quilombola community, the IBGE considers what is established in Decree 4887 of 2003, which states that quilombola communities are ethnic racial groups with presumed black ancestry related to resistance to historical oppression. 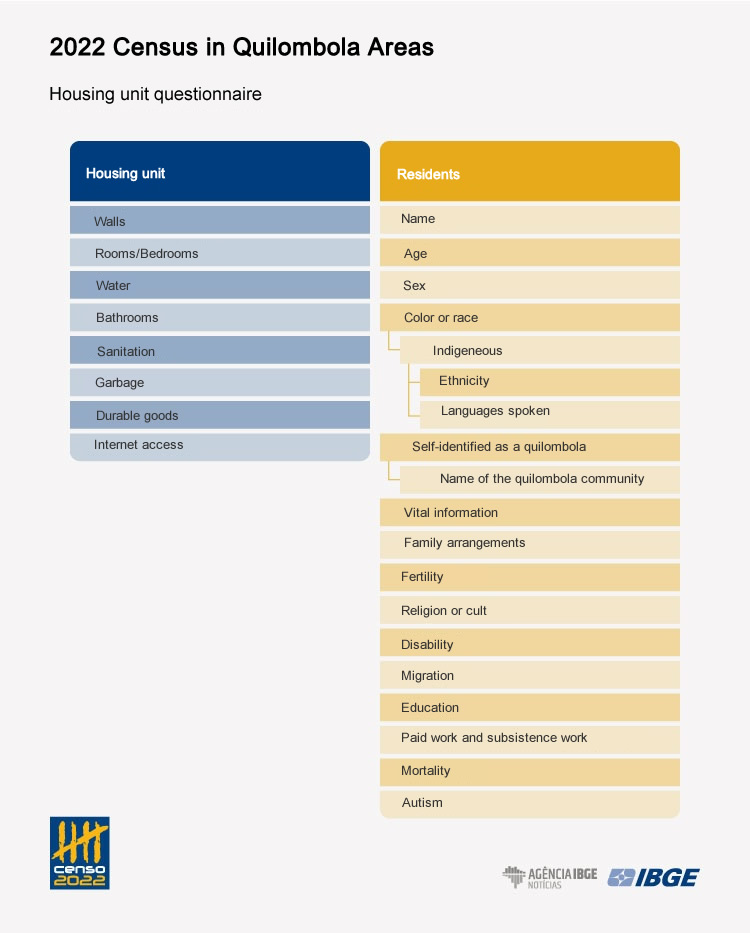 In the second step of consultation, caonsidering an agreement between the IBGE and Conaq, a mixed methodology was definied for communities, including the adoption of the question on belonging for pre-mapped areas and, for non-previously mapped areas, the registry of quilombola locality. Partnerships have been established with all bodies and quilombola leaderships aiming at the registration of the entire identified area. In the third and fourth consultations, there were revisions of census cartography and definition of the specific training.

“Considering there were leaders from all over the country, we identified the need of conducting state seminars to confirm this informative process and all the consultation agreements. Between January afnd March 2022, we have conducted 24 seminars in the 24 Federation Units where there are quilombolas. In this work there was also international observation, by means of the United Nations Population Fund (UNFPA) to guarantee that Convention 169 will be fully respected. Other consultation formats were available in all steps of the census. In the case of the questionnaire, there were national workshops based on the test conducted in 2017 in five communities of Região dos Lagos such as the quilombola community Maria Joaquina, in Cabo Frio, in Rio de Janeiro,” Ms. Antunes adds. .

During data collection, one more step of the consultation process will be finished when the enumerator gets to the community and has a meeting with leaders to explain the census to motivate the population to answer the census.

“The release of Census results will also be negotiated in the post-census step, in meetings and national workshops in order to reach the best formats to serve the quilombola population.”

The Population Census is the only official survey that provides information about the quilombola population and, in 2022, this investigation will be onducted for the first time. The participation of quilombola communities is fundamental for the quality of our survey, in such a way that the results reflect the reality of communities. All the communities will be visited by enumerators who will be wearing a unifor, with a vest, badge and cap. All the information provided are kept secret and used exclusively for statistical purposes.