IBGE survey shows a decade of information on students’ health

A decade of surveys about teenage health and its tendencies. That is what the IBGE has released today in the experimental study of the National Survey of School Health (PeNSE): comparable indicators of students in the 9th grade of primary school.

PeNSE presents information of food, physical activity, cigarettes, alcohol, other drugs, home and school situations, mental health, sex and reproductive health, dental health and hygiene, security, use of healthcare services, general characteristics ofstudents, general characteristics of the school environment, among others. The survey is conducted in partnership with the Ministry of Health and support from the Ministry of Education. 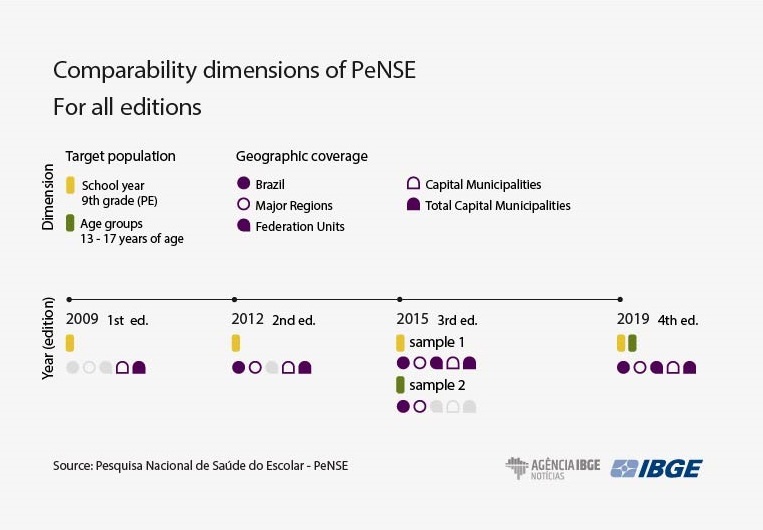 The publication presents a previously unseen analysis of the four editions of PeNSE (2009, 2012, 2015 and 2019). “In this decade, the innovations and modifications prevented direct comparison. To carry out the analysis, besides the traditional temporal comparison between points in the series, there were methodological strategies such as the harmonization of variables, stacking of bases and logistic regression,” says Marco Andreazzi, manager of the survey.

The study shows a trend to the occurrence of some topics. There is also some graphic representation of the chance ratio between capitals, using São Paulo as a reference for the calculation of distribution.

“In this period the Internet became an important strategic tool in terms of engagement and dissemination of information, including in schools,” says Marco Andreazzi, manager of the survey. However, when results of capitals are analyzed, regional inequalities appear: the North and Northeast ave the lowest indexes, found in Teresina, São Luís and Macapá. In Vitória, Florianópolis and Curitiba, the survey recorded the biggest results. 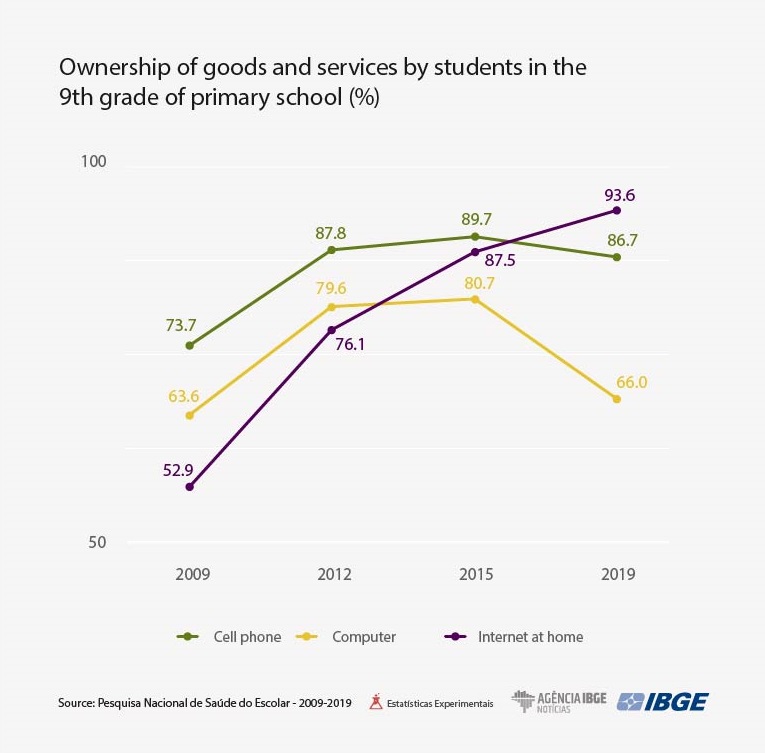 The lowest the level of schooling of students’ mothers, the worse their children’s health conditions and the higher the risk of mortality and the chance of poverty. From 2009 to 2019, the chances of students in the 9th grade having mothers without schooling of with incomplete primary education fell by 48%, and the prevalence of this indicator went from 25.6% (2009) to 15.2% (2019). Among students of private schools, this index was already very low in 2009 (5.1%) and fell to 4.3% in 2019. Among students in public schools, the percentage fell from 31% to 19.5%.

The index relative to mothers with a higher education degree went from 16% to 23.5% in the period, a percentage increase of 47.3%. The increase in public schools was 5.1 p.p, against 3.6 p.p in private ones.

“Although women’s higher level of schooling does not mean similar earnings as those of men, more schooling reeuces the proportion of teenage pregnancy, maternal death, level of poverty. As women’s working conditions get better, chances are children will have better health,” Mr. Andreazzi explains.

Body dissatisfaction increases among both thin and overweight persons

PeNSE also shows that dissatisfaction with one’s own body increased among students in the 9th grade of Primary Education. In 2009, 17.5% of the students complained about being fat or very fat, a figure jumped to 23.2% in 2019. Those who saw themselves as thin or very thin were 21.9% and increased to 28.6%. 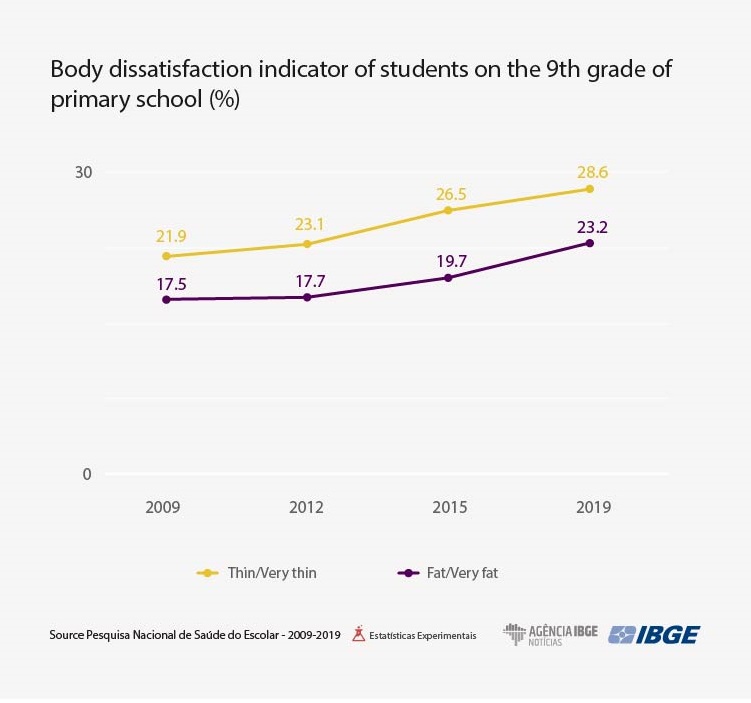 The study showed that teenages in the 9th grade tasting or being exposed to tobacco by smoking cigarettes presented no statistically significant difference between the editions of 2009 and that of 2019, despite the slight decrease from 22.9% to 21.0%. Nevertheless, the moment of exposure, under 14 years of age recorded a drop from 16.8% in 2009 to 13.1% in 2019. The capitals Salvador (0.60), Rio de Janeiro (0.63) and Aracaju (0.71) had of precocious exposure to cigarettes.

“It is also important to know at what time of life exposure was observed and there was slight drop oin this indicator, from 16.8% in 2009 to 13.1% in 2019. That is, exposure has been less precocious among teenagers, which is a positive thing,” Mr. Andreazzi reinforces.

For recent consumption of cigarettes, at least one or two days in the period of 30 days preceding the survey, there was a trend to decrease, with a cumulative drop of 15.3% in chances of consumption, in the period.

The chance ratio of getting drunk on some occasion showed a growing trend of 2.4% a year, with a cumulative 27% in the 2009-2019 period. Boys in the public education segment presented a trend to stability, whereas those in the private segment recorded a decrease of 2.6% in the year. In the case of girls there was increase in both education segments, mainly in the public one, where chances rose to 4.5% a year.

Tasting of drugs under 14 years of age increases

In terms of early exposure, that is, of persons under 14 years of age, the percentage changed from 3.4% in 2009 to 5.8% in 2019. A trend to increase in exposure chances was observed, with a hike of 87.5% in the period. There is a downward trend among boys in private schools and an upward one among boys in public schools and girls in both segments, with a significant increase of 164.6% among girls in public schools in ten years,” thr manager adds.

In the last ten years, the percentage of students in the 9th grade in capitals who missed school at least one day because they did not feel safe on the way or at school went from 8.6% in 2009 to 17.3% in 2019.

From 2009 to 2015, the percentage of students assaulted by other adults in the family increased

The percentage of students assaulted by an adult family member recorded progressive increase in the period analyzed, with a change from 9.4% in 2009, to 11.6% in 2012 and 16.0% in 2015. The capitals accounting for the highest percentages of victims of this type of violence, in 2015, were Cuiabá and São Paulo, whose percentages were 18.1% and 18.0%, respectively.

In 2019, there were changes in the question: perpetrators were split into two groups and the date of reference changed to 12 mmonths prior to the survey. The quantity of violent episodes was also investigated. So, in 2019, 27.5% of the students had been assaulted by their mother, father or caregiver and 16.3% of the students were assaulted by other persons. The cases of recurrent assault (6 or more times in the period) affected 4.2% of the students, in the case of a father, mother or caregiver being the perpetrator, and 2.6% in the case of other persons.

Sexual initiation increases among women, but use of condoms drops

The sexual initiation indicator has recorded statibility over the years, but with different behaviors according to sex and public or private education. Among boys, there is a trend to decrease, and figures decreased by 5.8% in the year in initiation chances, resulting in a cumulative 42.5% change in the period for boys in public schools. Among girls, sexual initiation chances increased by about 4.0% per year, with a change of about 41.0% in the period 2009-2019 for girls in both public and private education segments.

The use of condoms in the last sexual relationship among students who had already had a sexual relationship, showed a trend to decrease, with chances of use falling by 7.0% per year between 2099 and 2019 and by 51.3% cumulative in ten years.

“Hand washing was one of the most disseminated actions during the pandemic and maybe the most successful one. Availability of water should be of 100% and that is not even close to reality in public schools,” the manager adds.