The city of São Paulo was responsible for 10.3% of the Brazilian Gross Domestic Product (GDP) in 2019, adding up to R$763.8 billion. That municipality was one of those that mostly gained share in the sum of all final goods and services produced in Brazil compared with the previous year. The others were Maricá and Saquarema, in Rio de Janeiro, Parauapebas, in Pará, Brasília, in the Federal District, and São José dos Pinhais, in Paraná, with an increase of 0.1 percentage points each. The data are from the GDP of Municipalities, released today (17) by the IBGE.

Although São Paulo increased its share by 0.1 p.p. compared with the previous year, it was the municipality that mostly dropped in the comparison with the beginning of the time series of the survey, in 2002. The loss of 2.3 p.p. in the period is explained by the relative decrease in financial activities, insurance and related services.

For Luiz Antonio de Sá, an IBGE analyst of National Accounts, the retreat in the share of São Paulo represents a trend of reduction in the concentration of the GDP in few Brazilian cities. “In spite of municipalities with a high share in the GDP, like São Paulo and Rio de Janeiro, the concentration tends to decrease since the beginning of the time series. In this period, other municipalities ranked in higher positions in value of GDP, as they stood out in some economic activities, especially those related to industries. Some states advanced in power generation, others in agriculture. Therefore, important activities for the economy impacted the gain of share of other municipalities. And, in the face of that advance, the share of São Paulo reduces,” states him. 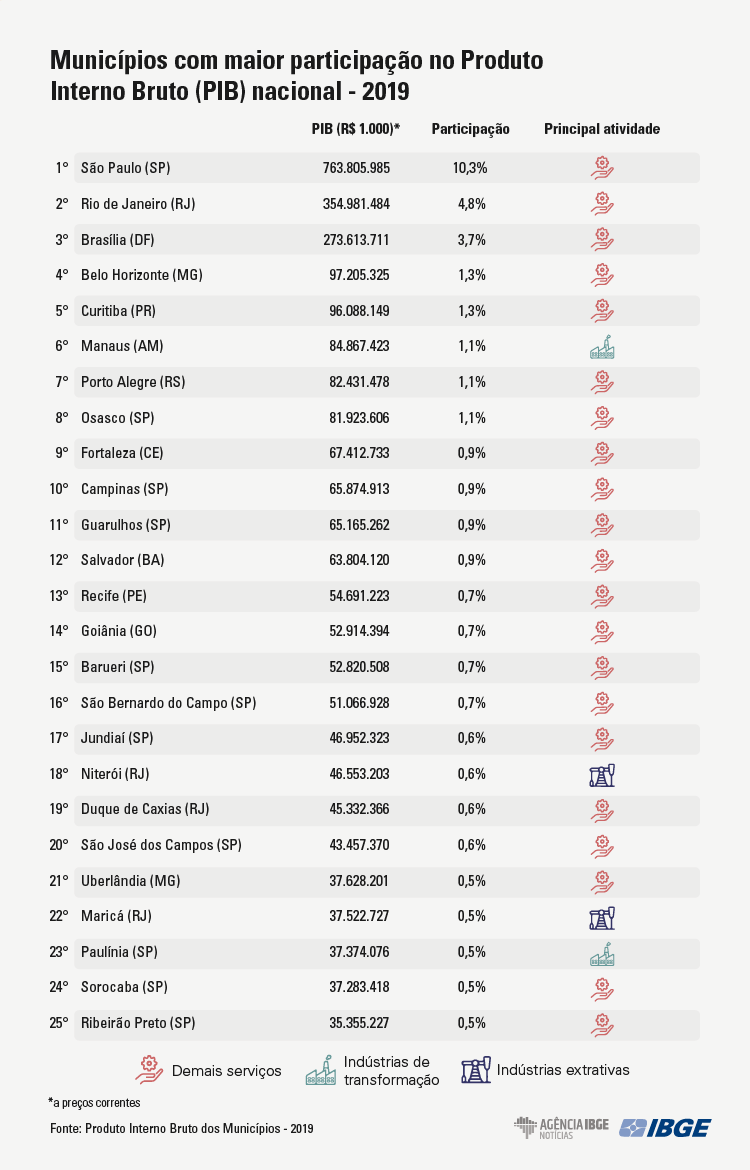 The survey also points out that of the 25 biggest municipalities in relation to the Brazilian GDP, 11 are capitals. “This is a historical characteristic of Brazil, which formed long before the beginning of the time series. We can notice that the Brazilian economy is much concentrated in the capitals since 2002. The sum of the 27, also considering Brasília, represents nearly one third of the national economy. There is a deconcentration trend, though the share of the capitals is still very high,” says the analyst.

Compared with 2018, Maricá, in Rio de Janeiro, was included and São Luís, capital of Maranhão, was excluded from that list. “Maricá had already been standing out in petroleum extraction and, in 2019, the output increased in the city. In the case of São Luís, the manufacturing industries retreated, especially in the segment of basic metals. The loss in the output was more decisive in the exclusion of the capital of Maranhão from the ranking of the 25 largest municipalities,” explains Sá.

When considering the 100 biggest municipalities in terms of value of GDP, the Southeast appears on the list with 58 cities, which concentrated 35.3% of the national GDP. “The predominance of Southeastern municipalities is quite evident in this division. This reality is also related to the history of Brazil. As it did not appear all of a sudden, it does not reduce all at once as well. The concentration profile is very ingrained within the distribution of the GDP. However, an advance in the deconcentration can be perceived, inasmuch as the North and Central-West are gaining share,” states him. The 100 largest municipalities added up to more than half (55.2%) of the Brazilian GDP in 2019. 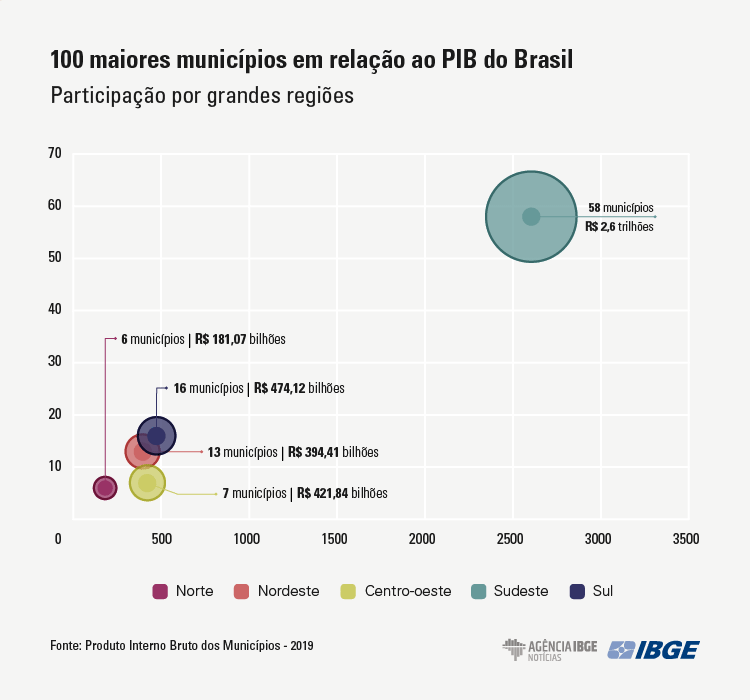 Among the cities that mostly gained share since the beginning of the time series are Maricá (0.5 p.p.), in Rio de Janeiro, and Osasco (0.3 p.p.), in São Paulo. While Maricá stood out in petroleum extraction, the increase in Osasco is related to financial activities, insurance and related services.

In Rio de Janeiro, the drop was mainly associated with basic metals. In Campos dos Goytacazes, the loss was linked with petroleum extraction. Both in Vitória and Ouro Preto, the loss of share was also linked with mining and quarrying industries, especially iron ore.

Presidente Kennedy, in Espírito Santo, has the highest per capita GDP in Brazil

The ten municipalities with the highest per capita GDP added up to 1.5% of the Brazilian GDP. The highest one is Presidente Kennedy, in Espírito Santo, with R$464,883.49. It was followed by Ilhabela, in São Paulo. Those two municipalities stand out in petroleum extraction. Selvíria, in Mato Grosso do Sul, appears in the third position, due to generation of hydroelectric power.

The per capita GDP of the city-region of São Paulo, which comprises 92 neighbor municipalities with a strong interaction, corresponded to 166% of the national figure. Whenever that region is compared with either the Northeastern semi-arid or the Legal Amazon, inequality becomes more significant. In the semi-arid, the per capita GDP was 40% of the national figure, whereas that of the Legal Amazon was 66%.

Public administration prevails in nearly half of the Brazilian municipalities

In nearly half of the Brazilian municipalities (48.9%), public administration was the major economic activity in 2019. That percentage exceeded 90% in some states like Acre, Roraima, Amapá, Piauí and Paraíba, whereas that was only 9.9% in São Paulo.

Among the 241 municipalities in which the major economic activity was related with manufacturing industries, 81.7% were in the Southeast and South.  Among those in which Agriculture, including support to agriculture and post-harvest, appears as the major activity, Mato Grosso recorded the highest percentage (39.7%), followed by Rio Grande do Sul (33.6%).