According to the Population Estimates released today (27) by the IBGE for the 5,570 municipalities, Brazil reached 211.8 million inhabitants in 2020, growing 0.77% over last year. With a reference date of July 1st, the study shows that 21.9% of the population is concentrated in 17 municipalities, all of them with more than one million inhabitants, being 14 of them state capitals.

The municipal population estimates are one of the parameters used by the Brazilian Court of Audit to calculate the State and Municipal Revenue Sharing Fund and are key to compute a number of social, economic and demographic indicators.

The municipality of São Paulo remained as the most populated, with 12.3 million inhabitants, followed by Rio de Janeiro (6.75 million), Brasília (3.05 million) and Salvador (2.88 million). Adding up to only 776 inhabitants, Serra da Saudade (MG) is the Brazilian city with the smallest population.

"The figures follow a trend already perceived over the last years, highlighting the emergence of regional poles, which show a population growth above 1% per year," explains Márcio Mitsuo Minamiguchi, IBGE´s manager of Population Estimates and Projections.

The North and Central-West recorded the highest proportions of municipalities with growth rates above 1%. In the South Region, 45.6% of the municipalities reduced their population. 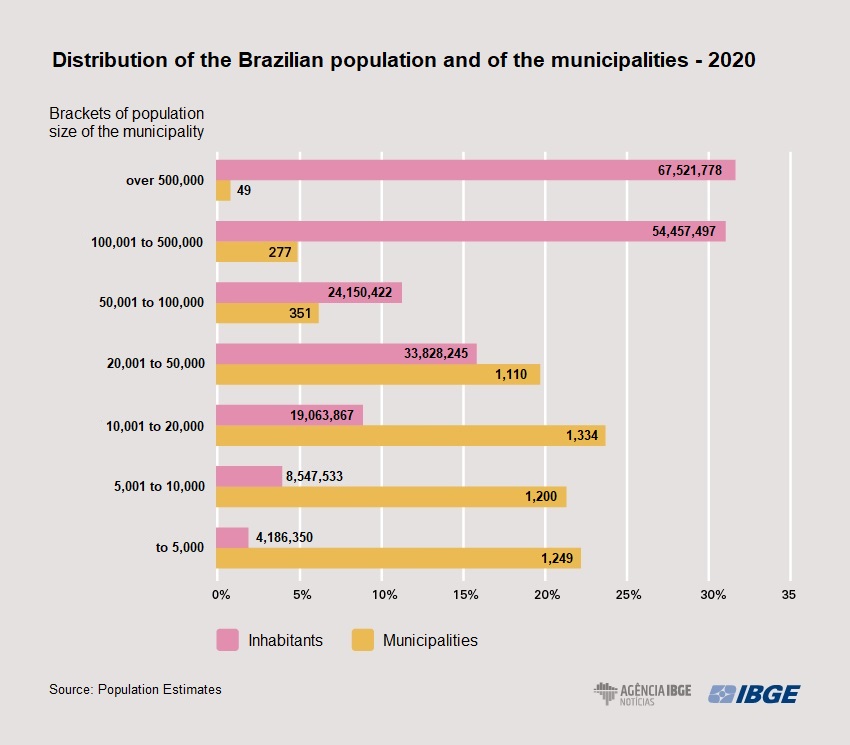 Regional poles have proportion of municipalities with population growth above 1%

The data reinforce the perception that the small municipalities are losing residents, whereas the medium ones grow – at the same time that the largest cities are stabilized in terms of population growth. "As the large towns are unable to expand and provide housing for all, it is natural that new families look for peripheral areas, improving the attractiveness of the regional poles," highlights Minamiguchi.

This phenomenon is also reflected in the estimates related to the Metropolitan Areas. The growth rates of the largest metropolitan areas in Brazil (São Paulo, Rio de Janeiro, Belo Horizonte, Porto Alegre, Fortaleza, Recife and Salvador) are slightly lower than the country average. In those metropolis, the growth of the capital is, in most cases, lower than that reported in the remaining municipalities.

In the ranking of the states, São Paulo remains as the most populated, with 46.3 million inhabitants, concentrating 21.9% of the total Brazilian population, followed by Minas Gerais (21.3 million inhabitants) and Rio de Janeiro (17.4 million). The five less populated states, which add up to 5.7 million persons, are all in the North Region: Roraima, Amapá, Acre, Tocantins and Rondônia.