The number of enterprises and other formal organizations in operation in Brazil retreated 1.8% between 2017 and 2018, adding up to 4.9 million, the lowest level since 2009. On the other hand, the number of employed persons increased 0.5%, reaching 52.2 million, and the total wages and other compensation rose 0.7%, reaching R$1.8 trillion. The information is from the Statistics of the Central Register of Enterprises 2018, released Thursday (25) by the IBGE.

In terms of wages and other compensation, the highlights with the highest balances were the Northeast (4.9 billion) and North (3.1 billion) regions, having contributed the most Maranhão (R$1.5 billion), Pará (R$1.2 billion) and Amazonas (R$1.1 billion), states with a strong participation of the activity of Public administration, defense and social security. 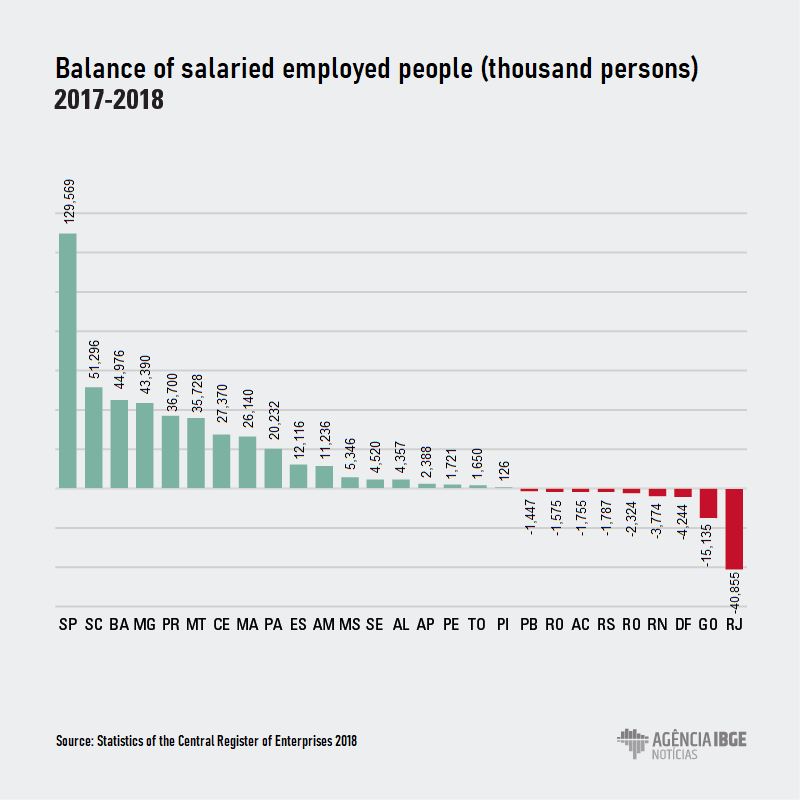 Number of smaller enterprises and organizations drops, but larger ones increase

In the entire country, the smaller enterprises, with less than 50 employees, are those that had more difficulty to recover. Compared with the drop of 1.4% in the number of local units of the enterprises and other organizations in Brazil, the retraction was higher in those with up to nine employed persons: 2.1%. In this range, employed personnel dropped both as total (-1.4%) and as salaried (-1.1%).

"The drop in the number of smaller enterprises and increase of the larger ones was related to the economic downturn that Brazil faced between 2015 and 2016. The smaller ones have more difficulty to survive in this scenario, since they have less access to credit and less cash flow to face periods of financial turmoil. Some segments improved in 2018, though other that suffered much were not able to recover. The trade sector felt the most the retraction," assesses Denise Guichard, an economist of the IBGE´s Directorate of Surveys. Rio de Janeiro was the only Federation Unit to show negative figures in all the indicators this year. Ranking below Brazil and the Southeast Region in the items related to employment, the state recorded the highest losses of personnel (less 40.9 thousand persons) and in compensation (less R$813.8 million) in Brazil.

In 2018, the number of employed persons, total and salaried, grew in all the regions, being the highest gains in the Southeast (80.3 thousand and 144.2 thousand), where all the other states increased their personnel. Wages and other compensation increased or remained stable in nearly all the Federation Units, except for Rio de Janeiro and Paraná (-0.3%). Rio de Janeiro posted the highest absolute and relative reduction in wages (less R$813.8 million and -0.5%) and the highest absolute loss of employed (51.0 thousand) and salaried (40.9 thousand) persons. 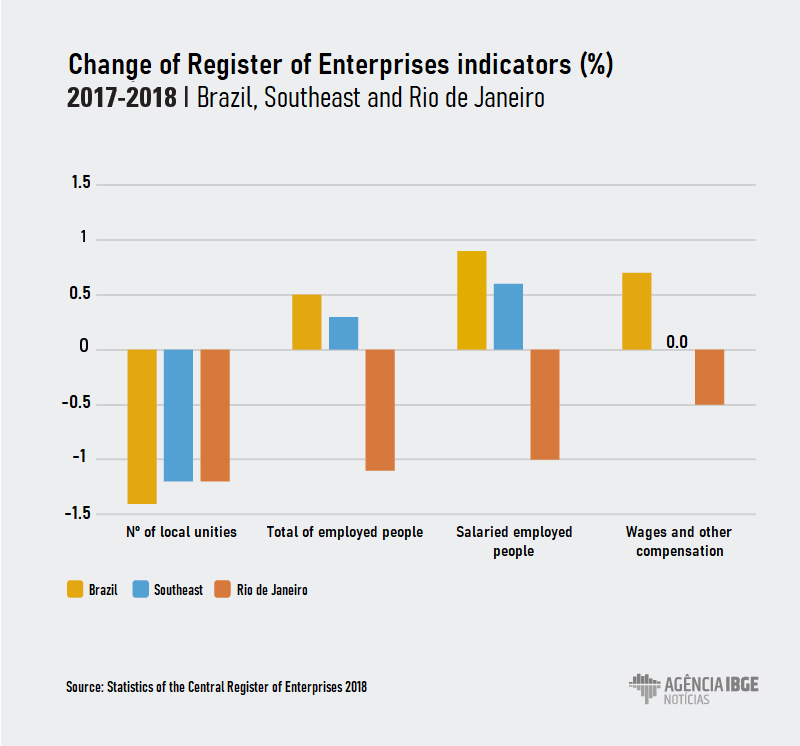 Denise Guichard reminds that the scenario of the economy in Rio de Janeiro worsened after the World Cup in 2014. "Infrastructure investments boomed due to the World Cup, after which the works reduced, coupled with a national economic downturn in 2014. The state also lost revenue, as its economy is highly dependent on petroleum royalties. All this together impacted the generation of jobs, leading to this daunting scenario," explains her.