Land Use and Cover

The study also shows that, from 2014 to 2016, more than 62 thousand square kilometers of the national territory suffered some kind of alteration. During the same period, there was a reduction of areas of natural vegetation and expansion of agricultural areas and of forestry, but at a slower pace than in the previous surveys.

The new pasture areas are mainly concentrated on the edges of the Amazon biome. The expansion of the agricultural area occurred in the southeast of Rondônia, in the region of Paragominas (PA), between the municipalities of Campo Grande (MS) and Cassilândia (MS), and in the region of the Campanha Gaúcha (RS). 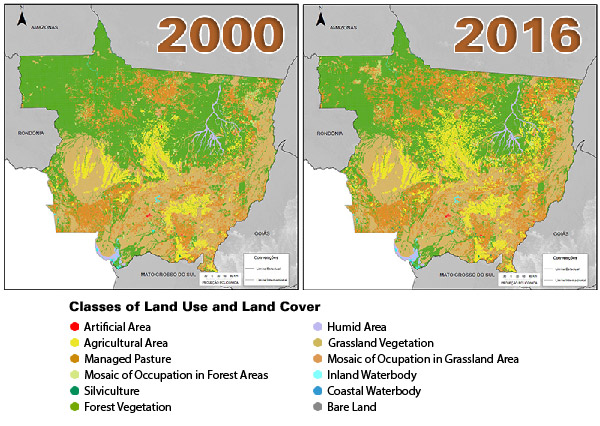 According to the IBGE supervisor, Ana Clara Alencar, based on data on land use and land cover, it is possible to understand the dynamics of land occupation and use, as well as to monitor the evolution and transformation of the Brazilian territory." In addition, it allows for the integration with all other social and economic indicators," she added.

Volume of sales of the retail trade in Brazil retreated 1.3% in September compared with the previous month, representing the second consecutive drop...

According to the first estimate of the Systematic Survey of Agricultural Production - LSPA, released today (11) by the IBGE, the Brazilian harvest...