The IBGE releases today (July 16) the Macro-characterization of The Brazilian Natural Resources - Structural Sub-provinces publication, which brings maps of the 97 Brazilian sub-provinces.

This study is the third volume of the series that shows information and analyses on Geology, Geo-morphology, Pedology and Vegetation. In this volume, the geology subject portrays the reflections of the geotectonic evolution.

The complete publication can be accessed here and through the Interactive Geographic Platform - PGI.

The third volume of the Macro-characterization of the Brazilian Natural Resources series brings maps of the 97 sub-provinces that comprise the 14 structural provinces identified in the first volume, spatially representing the major geological events of the national territory. By presenting an integrated view of the different geological-tectnonic environments, the publication provide students, teachers, Geosciences professionals and the public in general with an endorsed information source. In addition, the product will contribute to outline the natural units, which can be used as a spatial reference to the IBGE´s Environmental Statistics and Environmental-Economic Accounts.

The sub-provinces group the litho-stratigraphic units (rocky layers or strata) involved in the same processes of geo-dynamic origin, deformation and evolution, like the movement and interaction of the tectonic plates, the resulting formation or agglutination of continents, as well as the opening or closure of oceans and continental sedimentary basins over the last 4.5 billion years of the geological history of the planet. Although they involve regions with the same geological evolution, they result in a structure (architecture) quite different from the neighbor sub-provinces.

Distribution of the Brazilian Structural Sub-provinces,
according to the geological reference time 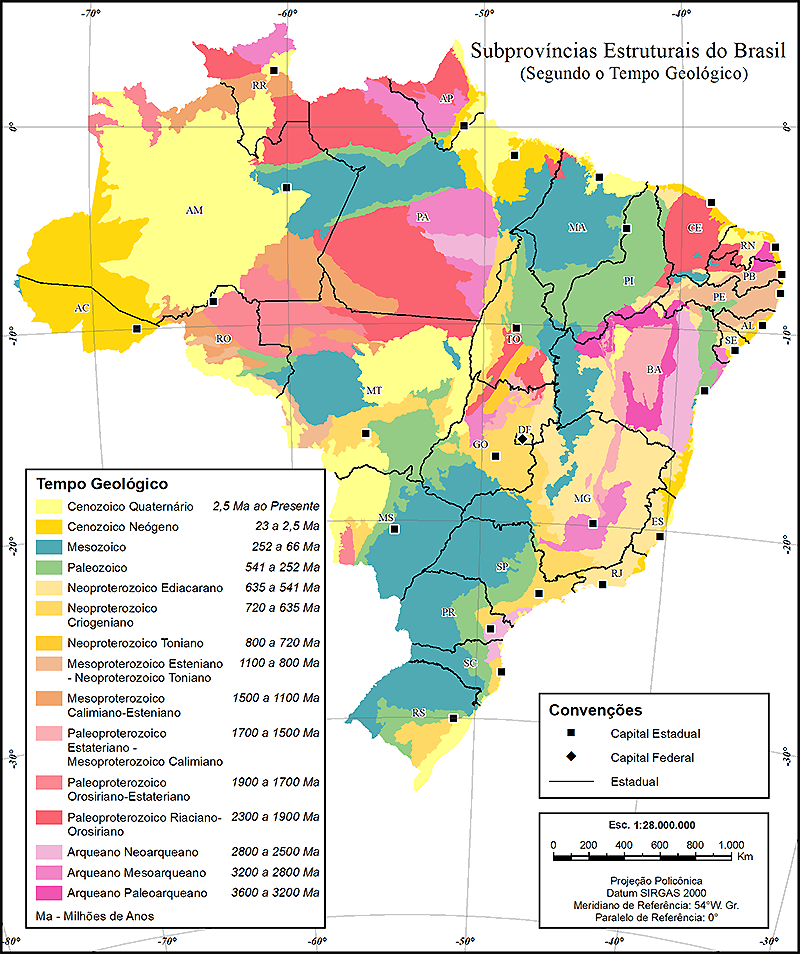 The maps of the publication follow and represent the geo-tectonic models already available in the national and international literature, and they were appplied and adjusted to the continuous geological mapping of Brazil, produced by the IBGE in the 1:250,000 scale.

Despite the huge potential of its subsoil, the publication points out that the Amazon region, in general, still shows poorly defined tracts concerning the evolutionary picture, with many doubts in the tectonic models available and lack of field geological mappings, even in the 1:250,000 scale. Such perception is still stronger especially in the north of Pará (in Acaraí Mountain); in the northwest of Amapá (in  Tumucumaque Mountain); in the border between the states of Amazonas, Mato Grosso and Pará (in Cachimbo Plateau); in the south of Pará (in the Xingu-Tapajós inter-river); and in Amazonas (in the Alto Solimões basin).