The IBGE released, today, the first volume of the collection entitled Macrocharacterization of Natural Resources in Brazil, which presents the result of thematic mapping material produced since the 1970's, by Project RADAM/RADAMBRASIL, in the 1990's, by SIVAM, and material updated up to 2017, with orbital images and field surveys. The publication is available at the IBGE's Interactive Geography Platform (PGI). It can also be downloaded in PDF format. Another release is the first one of a series of four 80 X 60 cm folders that summarize each one of the four topics within macrocharacterization. 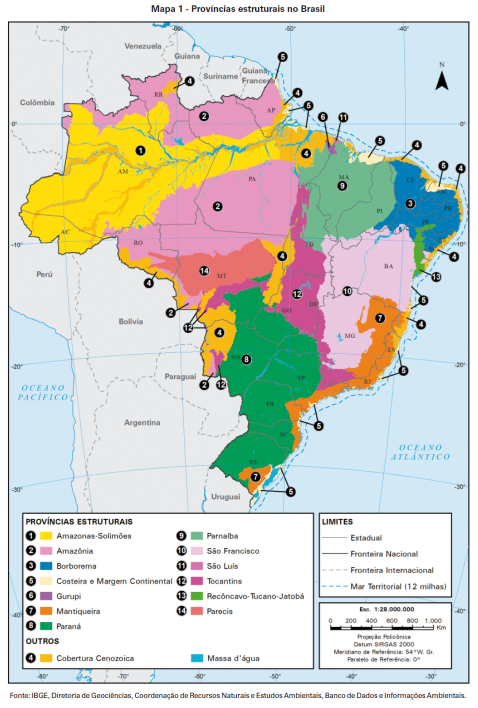 The maps, the photos and the field activities related to those projects come from project RADAM/ RADAMBRASIL, developed in the 1970's and 1980's. Later, a partnership between the IBGE and the Amazon Surveillance System (SIVAM), in 1998, produced new surveys. The complementary work, with satellite images and in loco observations, was carried out by the IBGE up to 2017. The resulting mapping covers all the country's territory, at the  1:250 000 scale.

The 167-page publication is subdivided into four chapters that present major groups of natural elements. Geology presents the structural provinces; Geomorphology, relief compartments; Pedology, the types of soils; and Vegetation, the phytoecological regions. Each chapter analyzes the meanings of classifications and technical procedures conducted prior to mapping.

The spatial distribution of natural elements is represented not only by means of maps, but also of photos, illustrations, diagrams and schemes. The publication also brings descriptive and analytical texts, besides statistics on the spatial distribution of natural elements relative to each topic, for Brazil and its 27 Federation Units. A list of references is available at the end of each chapter.

The IBGE also conceived a group of four 80 X 60 cm boards, with the main maps and graphic elements of each chapter of the Machocharacterization of Natural Resources in Brazil. The boards may be used in classrooms, study centers and environmental management agencies.

The first one of the four panels, on Geology, is also being released today. It brings the representation of structural provinces, relief compartments, types of soil and phytoecological regions.

The collection Macrocharacterization of Natural Resources in Brazil presents details of natural aspects of Brazil. It is directed to students, teachers, public agents and environmental managers.