The diet of Brazilians has changed in ten years, which managed to change the consumption profile of some nutrients. In this period, the intake of saturated fat and the consumption of fibers decreased. Other food habits remained in the diet of Brazilians, like adding sugar in beverages and food and adding salt in ready-cooked preparations. The information is from the Consumer Expenditure Survey - POF 2017-2018: Analysis of Personal Food Consumption in Brazil, published today (21) by the IBGE.

For André Martins, manager of the survey, these data provide an overview about the Brazilian diet. "Our food is still based on beans, rice and meat, and this is positive, but we have to improve the consumption of fruits and legumes and decrease sugar and sodium in excess," analyzes the researcher.

The consumption of saturated fatty oil (saturated fat) decreases in the group of men and women and in the three age brackets surveyed: teenagers, adults and elderly persons. The bracket of elderly women registered the biggest drop: the contribution to the food changed from 10.2% to 9.3%. According to Dr. Rosely Sichieri, a survey advisor, this reduction is positive and it can be attributed to the reduction in the consumption of beef in Brazil between 2008 and 2018. 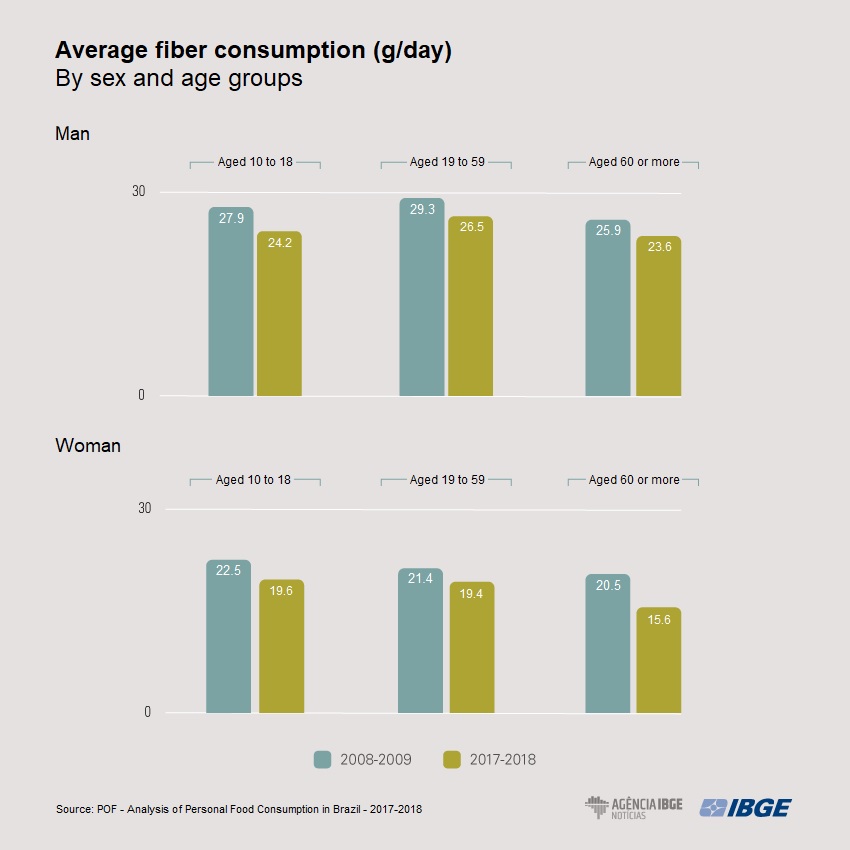 The content of fiber in the diet also dropped in ten years, in all age brackets and in both sexes, but it mainly hit women aged 60 years and over, changing from 20.5 g in 2008 to 15.6 g in 2018 within this bracket. For the advisor, this drop points out to a deterioration in the food quality and corresponds to the decrease in the consumption of beans, whose frequency in the diet fell from 72.8% to 60% in the period. "It is a food in the Brazilian diet that provides most of the fiber," explains Sichieri.

Yet, the high frequency in the consumption of sugar and salt still concerns experts. To sweeten beverages and food, 85.4% of the population stated adding sugar. The frequency decreased (it was 90.8% in 2008), but it is still considered high. The biggest consumption remained among teenagers, reaching 93% in both sexes, and the smallest among women aged 60 years and over (69.2%). In these ten years, the percentage of the population that states adding neither sugar nor sweetener increased from 1.6% to 6.1%. On the other hand, the use of artificial sweeteners rose from 7.6% to 8.5%. 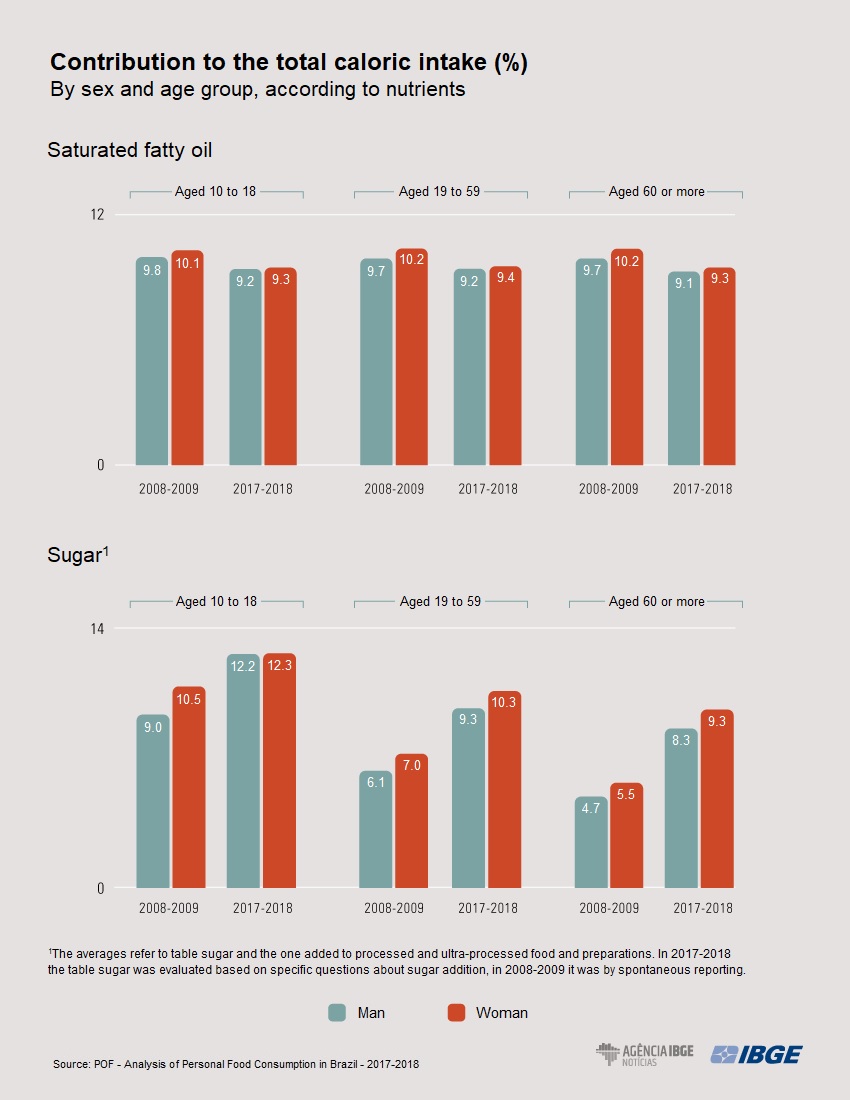 The percentage contribution of proteins, carbohydrates and fats for the total intake of energy also remained stable, varying from 53% to 57% for carbohydrates, 28% to 30% for fats and 17% to 19% for proteins, in both sexes.

Salt was added in ready-cooked food by 13.5% of the population and it was more frequent in adult men (16.5%). Sodium was ingested above the limit by 53.5% of the population, the highest index among adult men (74.2%) and the lowest one among elderly women (25.8%). "Taking into account medical recommendations, the survey shows that Brazilians remains consuming sodium above the tolerated limit. This is an issue we have to pay attention," points out Martins.

The survey also brings information on supplementation and diets for slimming or treatment of diseases and disorders. According to POF, slimming diets were more frequent in adult women (9.4%), whereas food restrictions related to chronic diseases or metabolic disorders like high blood pressure and diabetes were reported by 26.8% of elderly women and 19.1% of elderly men.

According to POF, 19.2% of the persons reported the use of at least one food supplement in the period of 30 days before the survey. This index rises to 41% among elderly women, who reported in a higher proportion the use of supplements with calcium (21.3%) and with vitamins (19.5%).

Supplements based on proteins and other supplements for athletes were reported by 1.7% of the whole population, whereas 13.9% reported to be on a restriction of food intake.