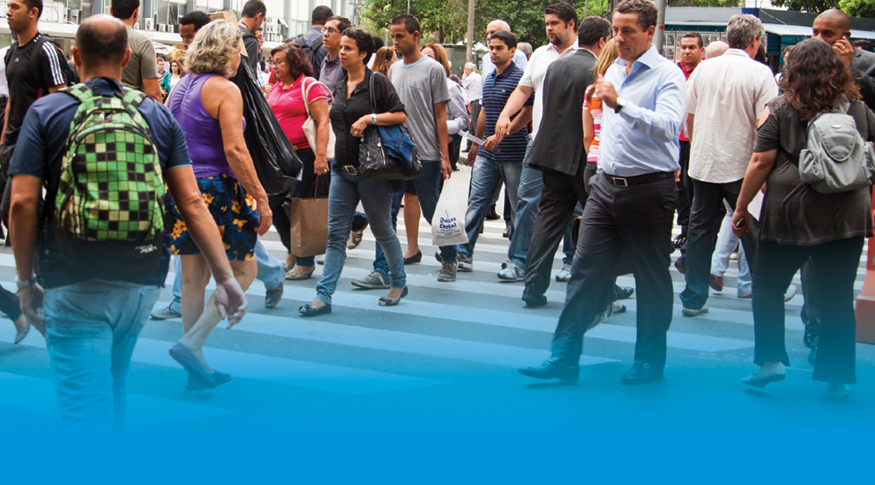 The country's population is expected to grow until 2047, reaching 233.2 million persons. In the following years, it will fall gradually until it gets to 228.3 million in 2060. These are some of the information from the 2018 revision of the IBGE Population Projection, which demographically estimates the growth patterns of the country's population, by sex and age, year per year, up to 2060.

Regarding international migration, the projection considered the emigration from Venezuela to Roraima between 2015 and 2022. During this period, about 79,000 Venezuelans would migrate to the state.

The 2018 revision extended the Population Projection to Federation Units until 2060. Santa Catarina, which today has the highest life expectancy at birth for both sexes (79.7 years old), is expected to maintain this leadership until 2060, reaching 84.5 years old. On the other hand, Maranhão (71.1 years old) has the lowest life expectancy at birth in 2018, a position that should be taken by Piauí in 2060 (77.0 years old).

The projection details the growth dynamics of the Brazilian population, monitors its main variables (fertility, mortality and migrations) and provides a projection of the number of inhabitants in Brazil and in the 27 Federation Units, year on year, from 2010 to 2060. This demographic study is carried out in partnership with planning bodies in almost all Brazilian states, following the recommendations of the United Nations Population Division. The 2018 Population Projection support material is on the right of this page.

The total fertility rate (average number of children per woman) projected for 2018 is 1.77 children per woman, and is expected to decline to 1.66 by 2060. The 2018 review showed that the aging of the fertility pattern is determined by the increasing number of women who get pregnant between the ages of 30 and 39 and the decreasing participation of women between 15 and 24 years old in the fertility rate in all the Major Regions of the country. 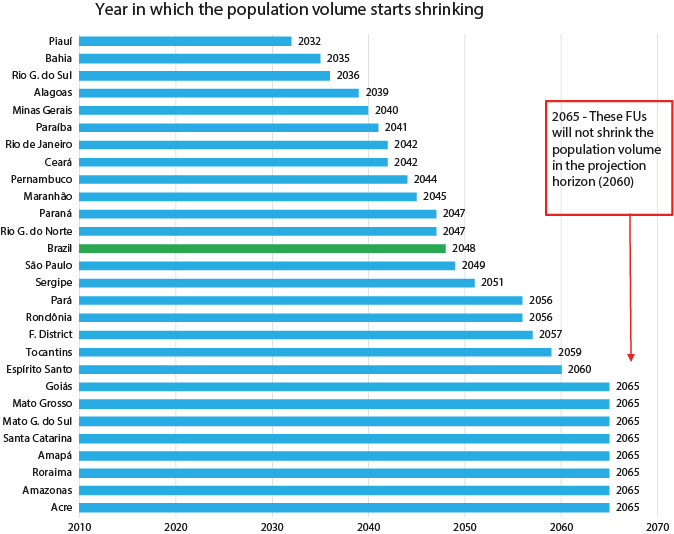 Average age at which women have children should be 28.8 years old in 2060

In addition to declining fertility levels, it is projected that the age-standard of fertility for women will also change, as it has been observed in the last decades, towards an aging of fertility in Brazil. The average age at which women have children, which is 27.2 years in 2018, is expected to reach 28.8 years in 2060.

Aging affects the population dependency ratio, which is represented by the ratio between the segments considered to be economically dependent (people under 15 and 65 years of age or older) and the potentially productive age group (15 to 64 years), which is the proportion of the population that, in theory, should support the economically inactive portion.

Roraima is expected to have the highest fertility rate in 2060: 1.95 children per woman

In 2060, Roraima should continue with the highest fertility rate (1.95), followed by Pará, Amapá, Maranhão, Mato Grosso, Mato Grosso do Sul, all with 1.80. The lowest rate should occurr in the Federal District (1.50) and Goiás, Rio de Janeiro and Minas Gerais, all with 1.55.

About 79,000 Venezuelan immigrants are estimated in Roraima by 2022

In the elaboration of the parameters and hypotheses for the international migration for the 2018 revision of the population projection, the migratory flows of all nationalities were monitored. The conclusion is that the entrances and exits in the national territory were compensated with a migratory balance near zero. The only exception were the flows from Venezuela, due to the local impact in Roraima.