Summary of Social Indicators: in 2020, without social programs, 31.2% of Brazil’s population would be in living in poverty

From 2019 to 2020, the proportions of the population living in extreme poverty and in poverty, in Brazil, according to the World Bank poverty thresholds, fell, respectively, from 6.8% to 5.7% and from 25.9% to 24.1% of the population. Without benefits from social programs, the proportion of persons in extreme poverty would have been of 12.9% and the rate of persons living in poverty would have reached 32.1%.

The pandemic also left 10.8% of the students aged 6 to 17 without face-to-face classes or school activities in November last year, according to PNAD Covid. In basic education, 42.6% of the schools promoted online classes, being 35.5% in the public system and 69.8% in the private one. Nevertheless, in the pre-pandemic period, only 48.6%% of the students aged 15 to 17 enrolled in public schools had a computer with Internet access in their homes.

In 2019, according to the Ministry of Health, the number of deaths in the country had an average annual increase of 1.9%. From 2019 to 2020, first year of the Covid-19 pandemic, there was an increase of 15.0%, amounting to a total 1.6 million deaths. In 2020, according to the Ministry of Health, infection by coronavirus with a non-specified location caused the death of 57,681 black or brown men and 56,942 white men. In the age groups below 70 years of age, the number of deaths of blacks and browns exceeded that of white persons. In the age group 0-4, the number of black or brown children who died was twice that of white children.

According to POF 2017-2018, for 51.4% of the population living in rented housing units, the rental contract was only verbal. This group represented only 8.6% of the country’s population. The same POF showed that 10.3% of the country’s population lived in housing units prone to floods. In the metropolitan area of Rio de Janeiro, 28.2% of the population were facing this situation, the biggest percentage among urban areas in Brazilian capitals. In the same metropolitan area of Rio, it took 26.2% of the workers more than one hour to get to work. In this indicator, the metropolitan areas of São Paulo (22.8%) and Belo Horizonte (16.5%) followed.

In May 2020, 35.8% of the tenants lived in housing units where the rent was equals to or higher than 30% of the household income.

Without social programs, 32.1% of the population would be living in poverty

Considering poverty (US$5.50/day) and extreme poverty (US$1.90/day) indicators according to thresholds of the World Bank, there was a drop in the incidence of extreme poverty and poverty in Brazil between 2019 and 2020: proportions fell, respectively, from 6.8% to 5.7% and from 25.9% to 24.1% of the population. However, in a hypothetical scenario without the benefits from social programs, the proportion of persons living in extreme poverty would have increased from 5.7% to 12.9% and of those living in poverty, from 25.9% to 32.1%.

The states with the lowest percentage of their populations below the extreme poverty threshold in 2020 were Santa Catarina (1.9%) and Rio Grande do Sul (2.4%), with Mato Grosso do Sul and the Federal District (both with 2.6%) in the following positions.

Also, families with a female head of households who were black or brown, without a spouse and with children under 14 years had highest poverty levels: 17.3% of the residents of these arrangements had household income per capita below US$ 1.90 and 57.9%, below US$ 5.50 per day.

In the absence of benefits, by color or race, the rates more than doubled. For blacks or browns, the rate of extreme poverty without social programs would be 17.0% and, among white persons, of 7.6%. The difference would then chenge from 3.9 percentage points to 9.4 percentage points. Black or brown women would reach the highest poverty level among the groups (42.4%).

Without social programs, income of the poorest population would fall by 75.9% in 2020

With or without benefits from social programs, the Gini index would have kept, at different levels, decrease up to 2015 and increase up to 2018, with significant stability in 2019. 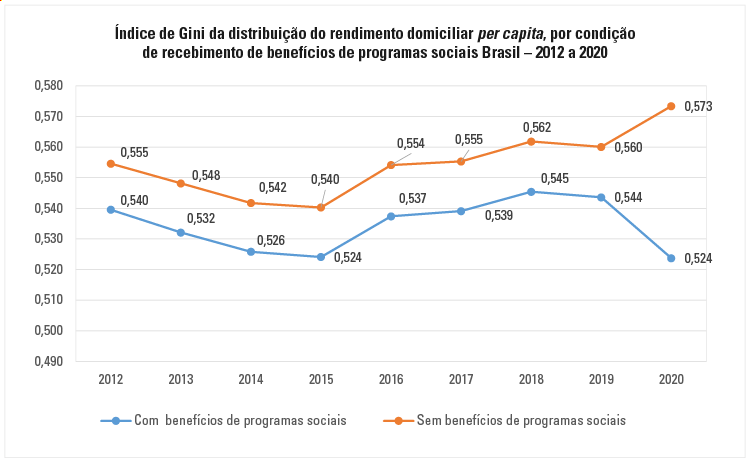 The Palma ratio showed that, in 2020, the 10% with the highest earnings took 3.71 times more of the total income than the 40% with the lowest earnings. Without benefits from social programs, inequality would be even bigger, with the index reaching 5.39 times more.

The proportion of employed black or brown workers (53.5%) was bigger than that of men (45.6%). However, blacks or brown persons were in positions, mainly in agriculture (60.7%), construction (64.1%) and domestic services (65.3%), activities with earnings below the average in all the years of the time series.

In comparison with 2019, the effects of the pandemic on the labor market affected the most vulnerable groups and persons with a lower level of schooling. Women (-10.9%) and black or brown persons (-10.5%) were affected by the biggest decreases in employment, considering all levels of schooling. There was also significant decrease in persons without schooling or with incomplete primary school (-19.0%).

Informality reached 44.7% of the black or brown persons and 31.8% of the white persons 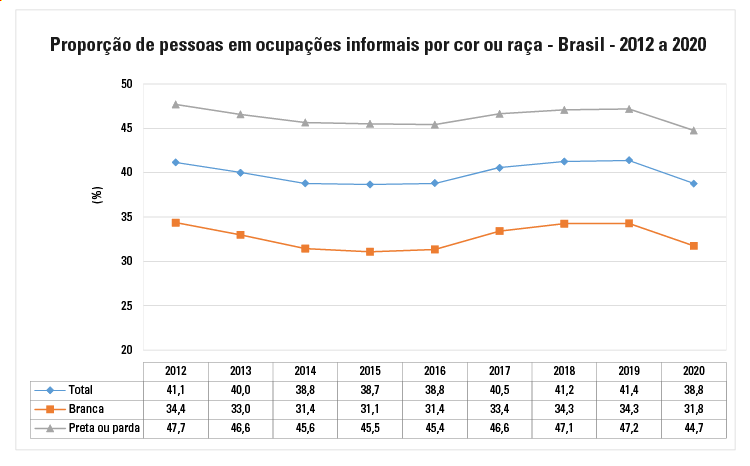 The percentage of informal workers (employees and domestic workers without a contract, self-employed persons and employers, these ones that do not pay social security) and auxiliary family worker, reached their highest level in 2019 (41.1%) and fell to 38.8% in 2020, showing that the economy affected informal workers more severely.

White persons made 73.3% more than blacks or browns

Blacks or browns were 53.5% of the employed persons, but reached 64.5% of the underemployed

In November 2020, 10.8% of the students did not have school activities

According to Inep, in basic education, 42.6% of the schools promoted live online class and with possible interaction betwween the teacher and their students, being 35.5% in the public system and 69.8% in the private system. Acre (8.1%), Amazonas (9.9%) and Pará (13.2%) recorded the smallest percentages in the public system, whereas the smallest percentages in the private system were those of Rio Grande do Sul (56.9%), Roraima (57.1%) and Maranhão (60.0%).

In the pre-pandemic period, only 50.4% of the students aged 15 to 17 enrolled in the public system had a computer

About 67.3% of the white students in this age group had simultaneus access to a computer or notebook and Internet in the housing unit, versus 46.8% of the black or brown students.

Families without a spouse had limited access to healthcare services

Persons living in family arrangements formed by a women withouy a spouse and with children up to 14 years of age had biggest proportion of limited access to medicines (20.7%) and healthcare services (33.5%) in relation to the population overall (16.4% and 26.2%, respectively).

When the reference person is a black or brown woman, restrictions were even more severe: 22.5% of the persons in these arrangements had limited access to medicines and 35.6% to healthcare services.

From 2019 to 2020, the country received almost 20 thousand complementary beds

Number of deaths in the country increases 15% in one year

In 2019, in the group aged 60 to 69, 9 thousand persons died of some infectious or parasitic and none of these cases was caused by the coronavirus. In 2020, the number of deaths increased to 56 thousand, being 47 thousand of them due to the coronavirus.

In the age groups below 70 years of age, the number of deaths of blacks and browns exceeded that of white persons.

Half of the tenants had informal rental contracts

According to POF 2017-2018, for 51.4% of the population living in rented housing units, the rental contract was only verbal. This group represented only 8.6% of the country’s population.

The informality rate of rental contracts almost reached 72.4% in the population quintile of lowest income per capita and almost three times lower (27.1%) in the quintile with the highest income. Besides, the difference between the index of the white population (42.7%) and of the black or brown population (58.7%) was of 16.0 percentage points.

More than one third (37.5%) of the population were part of families that delayed payment of water, electricity or gas bills due to financial difficulties at least once in a period of 12 months, according to POF 2017-2018. This proportion was higher among blacks or browns, among youngsters and in housing units of the quintile with lowest monetary income per capita. The proportion of defaulter families that did not pay for basic services reached 54.3% in Amazonas. Santa Catarina had the smallest proportion (19.7%).

About 54.1% of the persons that were part of families with a female head of household, without a spouse and with children up to 14 years of age were defaulters for not paying for basic services (electricity, gas, water and sewage, etc.). That was the family arrangement with the highest default percentage.

10.3% of the country’s population lived in housing units prone to floods

POF estimated that 28.2% of the population in the metropolitan area of Rio de Janeiro lived in housing units located in areas prone to floods, the highest percentages among the areas analyzed. And the metropolitan area of Maceió showed the biggest percentage of persons living in housing units located on hillsides or areas prone to floods.

It takes 9.8% of the population more than 1 hour to get to work

POF 2017-2018 also showed that it took 9.8% of the employed Brazilian population more than one hour to get to work. Among the residents of urban areas of capitals and metropolitan areas, this percentage reached 16.7%.

Among the 27 urban areas of capitals and of metropolitan areas formed by capitals analyzed by SIS, that of Rio de Janeiro recorded the highest percentage of employed persons that spent more that one hour to get to work: 26.2%, or more than one fourth of the workers. São Paulo (22.8%) and Belo Horizonte (16.5%) followed.

PNAD COVID 19 showed that, in May 2020, 35.8% of the tenant population lived in housing units where rent was equals to or above 30% of the household income - a situation classified as Excessive rental burden In the following months, this proportion fell, and reached 27.2% in August 2020.

Without income from auxiliary aids related to the pandemic, the occurrence of excessive rental burden would have reached 49.6% in May 2020.