In the Public Finance Statistics, net borrowing of the general government was R$903.0 billion, reversing the downward trend reported up to the previous year. This result reflected the drop of 6.5% in the total revenue against the rise of 9.3% in the expenditures of the three spheres of government over 2019.

This information is from Public Finance Statistics and Government Intermediate Account 2020, produced by the IBGE in partnership with the National Treasury of Brazil (STN) and the Central Bank of Brazil. 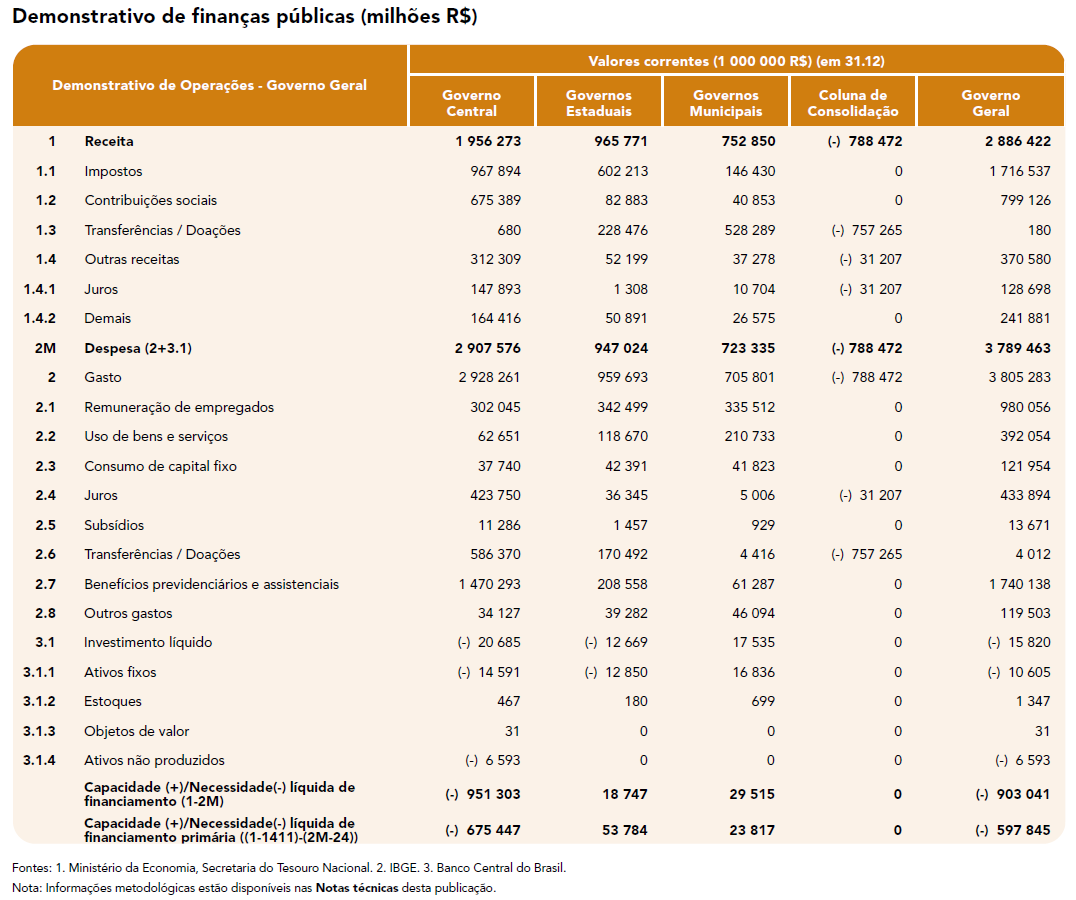 In 2020, public finances were influenced by the Covid-19 pandemic and by the measures adopted by governments to face it. Net borrowing of the general government registered in the Statistics of Public Finances reversed the downward trend reported up to the previous year, reaching R$903.0 billion. This result reflected the drop of 6.5% in the total revenue against the rise of 9.3% in the expenditures of the three spheres of government over 2019.

The behavior of the revenue was due, to a large extent, to the composite effects of the drop of 1.8% of the revenues of taxes and the decrease of 29.7% of other revenues. The major negative changes were concentrated on taxes more directly related to the economic activity, like taxes on goods and services, with a drop of 2.8%, taxes on income, profits and capital gains (-1.7%) and social contributions (-1.5%).

Among taxes on goods and services, the negative effect in taxes on financial and capital transactions stood out, with a drop of 46.4%. This result was explained, to a great extent, by the establishment of rate zero in the Tax on Financial Operations (IOF) for credit operations between April 3, 2020 and November 26, 2020 and between December 15, 2020 and December 31, 2020, as part of the measures to face the crisis.

Among other sources with a relevant contribution to the total revenues and influence on its reduction, asset income stood out, which retreated 43.2% in the period. This result was due to the decrease in the revenues with interests (-28.2%), reduction in the collection of dividends (-56.1%) and collection of concession of assets not produced (-58.2%). These reductions were associated with events that took place in 2019 and were not repeated in 2020, like the surplus of onerous transfer of petroleum and the increase in the distribution of dividends of the Brazilian Development Bank (BNDES) that year.

Expenditures with compensation and goods and services increase net borrowing

In the Public Finance Statistics, some of the major components of expenses rose, contributing to the increase in net borrowing. Although they decelerated over the previous year, compensation remained rising (1.7%), mainly affected by the municipal sphere. The expenditures with goods and services also increased (2.6%). In contrast, expenditures with interests and subsidies dropped 17.6% and 25.3%, respectively. Having grown 30.8%, total social benefits were the category that exerted the major impact on the expenses.

Biggest impact is due to the category of social benefits, with a rise of 30.8%

Having grown 30.8%, social benefits were the category that exerted the biggest impact on the total volume of expenses, since they concentrated a significant part of the resources destined to face the pandemic.

In the Government Intermediate Account, the social assistance benefits - which incorporate the emergency aid and the Emergency Program of Maintenance of Employment and Income benefit - grew 324.2%, changing from R$97.8 billion in 2019 to R$415 billion in 2020. Social security benefits, which mainly encompass the benefits of the General social Security System (RGPS), grew 7.2%, whereas the other social security benefits rose 6.9%.

The value added of the general government, measured as a first proxy from the Government Intermediate Account, allowed to assess its contribution to the calculation of the Gross Domestic Product (GDP) by the point of view of the supply in the SNA and its composition among the government spheres.