Among the Federation Units, the highest life expectancy was found in Santa Catarina (79.9 years), 3.3 years above the national average, and the lowest one, in Maranhão (71.4 years). On the other hand, the lowest infant mortality was in Espírito Santo (7.8 per thousand) and the highest one, in Amapá (22.6 per thousand).

This information is available in the Complete Life Tables for Brazil - 2019, which includes life expectancies of exact ages up to 80 years. This information is used as one of the parameters to calculate the social security factor for retirement pensions under the General Social Security System.

Mortality rate before one year of life is 11.9 deaths per thousand births

Between 20 and 24 years, men have 4.6 more chances of dying than women

In 2019, a 20-year old man had 4.6 times more chance of not completing 25 years than a woman in the same age group. The range between 15 and 34 years of age showed the highest gap between the mortality rate of the male population in relation to the female one. This phenomenon could be explained by the higher incidence of deaths due to external or non-natural causes, which mostly hits the male population.

Male over-mortality stayed below 2.0 from 45 years onwards. In 1940, the difference did not surpass that level in any age range.

The current scenario reflects the processes of urbanization and metropolization. In 1940, 68.8% of the population lived in rural areas, where the sanitary conditions were poorer and mortality was high in the group of young adults for both sexes, indistinctly.

From the mid-1980s onwards, the deaths associated with external or non-natural causes, which include homicides, suicides, accidents and drownings, happened to perform a prominent role, though negative, on the structure by age of the mortality rates, particularly those of male young adults. 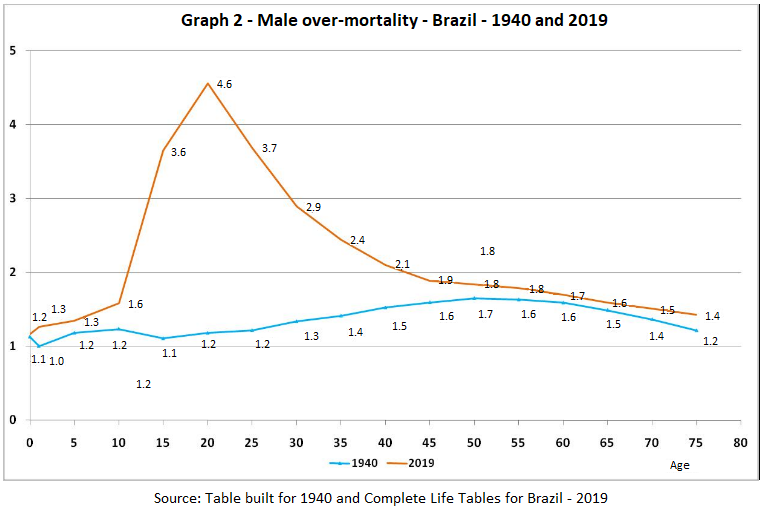 Life expectancy of elderly persons increases by 8.3 years between 1940 and 2019

Espírito Santo has the lowest infant mortality rate and Amapá, the highest one

Concerning the Federation Units, the lowest infant mortality rate in 2019, as well as in 2018, was registered in Espírito Santo: 7.8 deaths of 1-year old children per each thousand live births. In contrast, the highest one was, once again, in Amapá: 22.6 per thousand.

Even states like Espírito Santo, Paraná, Santa Catarina, Rio Grande do Sul, São Paulo and Minas Gerais, besides the Federal District, with rates below 10 per thousand, are far from those found in the most developed countries. For example, Japan and Finland had rates below 2 per thousand for the 2015-2020 period. However, they were quite below the countries of Western and Central Africa, whose infant mortality rates were around 90 per thousand. Our rates were closer to China (9.9 per thousand). 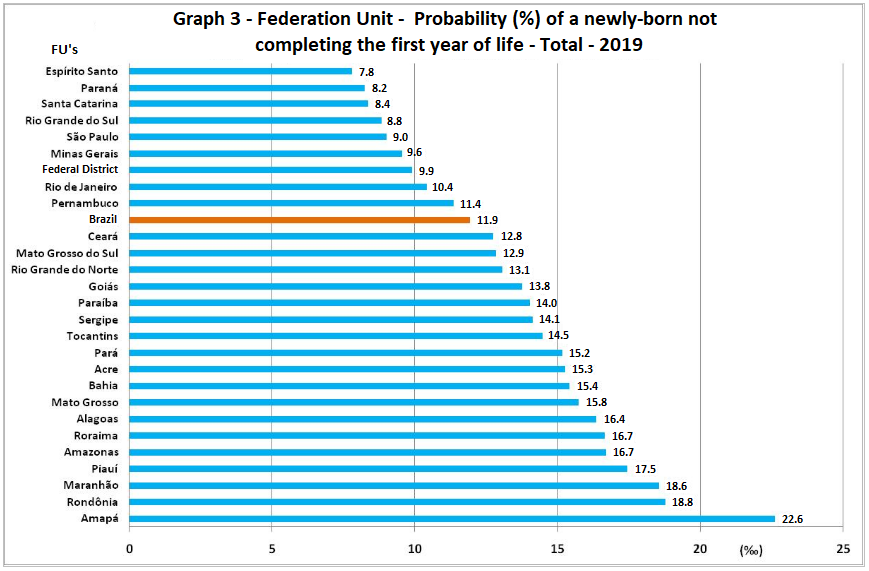 In Rondônia, less than half of the persons who complete 60 years reach 80.

Concerning life expectancy at birth, Santa Catarina was the state with the best rate (79.9 years), standing 3.3 years above the national average (76.6 years). It was followed by Espírito Santo, São Paulo, the Federal District, Rio Grande do Sul and Minas Gerais, with figures equal to or above 78.0 years. On the other side, the lowest life expectancy rates were reported in Maranhão (71.4 years) and Piauí (71.6 years).

In nine states, life expectancy at birth of women surpassed 80 years, most of them in the South and Southeast regions, except for Rio Grande do Norte and the Federal District. The biggest differences between life expectancies of men and women were reported in Alagoas (9.5 years), Bahia (9.2 years), Piauí (8.6 years) and Sergipe (8.5 years). Considering the extreme figures of life expectancies between men and women, a newly-born in Santa Catarina expected to live, on average, 15.9 years more than a newly-born in Piauí.

Male mortality surpassed that of women. Nevertheless, life expectancy of men in Santa Catarina (76.7 years) was higher than that of women in the states of Roraima (75.1 years), Maranhão (75.3 years), Rondônia (75.5 years), Piauí (76.0 years) and Amazonas (76.3 years). The biggest probabilities of survival between 60 and 80 years of age were reported in Espírito Santo: 581 per thousand for men and 723 per thousand for women.  And the smallest ones, in the states of Piauí for men (427 per thousand) and Rondônia (557 per thousand) for women. For both sexes, the lowest rate was reported in Rondônia, where less than half of the individuals who reached 60 years completed 80 years of age.