When searching for medical care in 2019, 76.5% of the persons used to look for the same place, same doctor or same health service, being that 69.8% of them looked for public health establishments. Among the types of establishments pointed out, health centers - UBS were the most reported, with 46.8%, reaching 55.3% in the North and 54.1% in the Northeast.

Only 28.5% of the Brazilian population (59.7 million persons) had a health plan in 2019, either medical or dental. In the population with a monthly income of up to 1/4 of the minimum wage, only 2.2% had a medical health plan. In the bracket above five minimum wages, 86.8% had a plan.

Of the persons who had a medical health plan, 46.2% were holders who paid the costs directly to the plan, whereas 45.4% depended, either partially or entirely, on the employers to pay for the costs.

Nearly all the medical plans covered consultations (99.1%) and examinations (98.3%) and the major part of the population had their hospitalizations (91.6%) and deliveries (77.6%) covered. Among those who had a medical health plan, 77.4% assessed them as either good or very good.

The survey also pointed out that 23.8% (9.5 million) of the households registered one or more years before in Family Health Centers never received any visit from Community Health Agents or members of Family Health Teams, a strong increase over 2013, when the percentage was 17.7% (5.3 million).

The survey unveiled that 8.1% of the population (16.9 million persons) interrupted their usual activities because of health problems in the two weeks preceding the interview, a percentage higher than that of 2013 (7.0%).  Bone and joint problems was the major reason (25.1%), followed by respiratory problems (21.0%).

This information is part of the National Survey of Health - PNS 2019, carried out by the IBGE in partnership with the Ministry of Health. Released today, the first volume of the PNS brings data on the access to health services, coverage of health plans, presence of animals in the households and their vaccination, among others.

Less than one third of the population have health plan

The bigger the schooling level, the bigger the coverage of the health plan, ranging from 16.1% (without instruction or with incomplete elementary school) to 67.6% (complete higher education), which also followed the difference by earnings.

In addition to the differences by groups of income and education, a coverage of 20.1% for browns, 21.4% for blacks and 38.8% for white persons were registered. In relation to 2013, only the brown persons, who recorded a proportion of 18.7% that year, posted a significant statistical change, registering an increase of 1.4 p.p.

Among the regions, the Southeast (34.9%) and South (30.5%) recorded the highest coverages proportional to their populations. Among the Federation Units, São Paulo (38.4%) and the Federal District (37.4%) stood out.

45.4% of health plans are paid by employers, either entirely or partially

The coverage of the dental health plan was quite less comprehensive than that of medical type: 12.9% against 26.0%. Even in the highest income ranges, dental health plans were acquired by nearly one third of the persons.

Among the residents who had a health plan, 77.4% assessed the main medical health plan (or unique) as either good or very good, largely ranging between the Northeast (72%) and South (80.4%). By age group, the elderly population (aged 60 years and over) recorded the lowest proportion in terms of satisfaction with the supplementary service (75.9%). The black population posted the lowest proportion with either good or very good assessments of their health plans (73.9%), standing below that of the white population (78.5%).

This percentage significantly dropped against 2013 (47.2%), though the number of households that received those visits was smaller (14.1 million). What explained such behavior was that the number of registered households increased more than the number of monthly visits.

Nearly 23.8% (9.5 million) of households registered for one or more years never received any visit of a Health Community Agent or a member of the Family Health Team, a strong increase compared with 2013, when the percentage was 17.7% (5.3 million). Such increase was recorded in all the Major Regions, highlighting the Southeast Region, which reached 30.0% (nearly one third) of the registered households that never received any visit.

In 2019, the survey estimated that 64.6% of the households were visited by at least one agent from the Endemic Disease Control in the 12 months preceding the date of the interview, the equivalent of 47.4 million housing units. The percentage was higher in 2013: 69.3%. On the other hand, more 2.4 million households received at least one visit in the reference period between 2013 and 2019.

8.1% of population did not accomplish usual activities due to health problems

In 2019, 8.1% of the population (16.9 million persons) did not carry out usual activities due to health problems in the two weeks before the interview, a higher percentage than in 2013 (7.0%). The Northeast and Southeast regions registered the highest proportions (8.7% and 8.0%, respectively) and the South and Central-West, the lowest ones (both with 7.4%).

The elderly population (aged 60 years and over) reported the highest proportion of persons who abandoned usual activities due to health reasons (12.2%), followed by the range between 40 and 59 years of age (9.7%). Like in 2013, the proportion was higher among women (9.6%) than among men (6.3%). By schooling level, persons without education or with incomplete primary education registered the highest proportion (9.8%).

Bone and joint problems was the major reasons reported (25.1%), followed by respiratory problems (21.0%). The two reasons were the most reported in all the regions. Gastrointestinal problems (8.8%), cardiovascular problems (7.1%) and mental health (6.2%) also stood out.

Of the persons who abandoned the activities for health reasons, 12.7% reported that such reason was related to their work. In these cases, men (16.1%), persons aged between 40 and 59 years (21.8%) and persons with complete higher education (16.1%) recorded the highest proportions.

In 2019, 76.5% of the population used to look for health care in the same place, doctor or health service. In 2013, that estimate was of 77.8%. The biggest parcel (46.8%) pointed out the Health Centers - UBSs as the establishment they used to look for more frequently. UBSs were the most reported in all the Major Regions, particularly in the North (55.3%) and Northeast (54.1%). 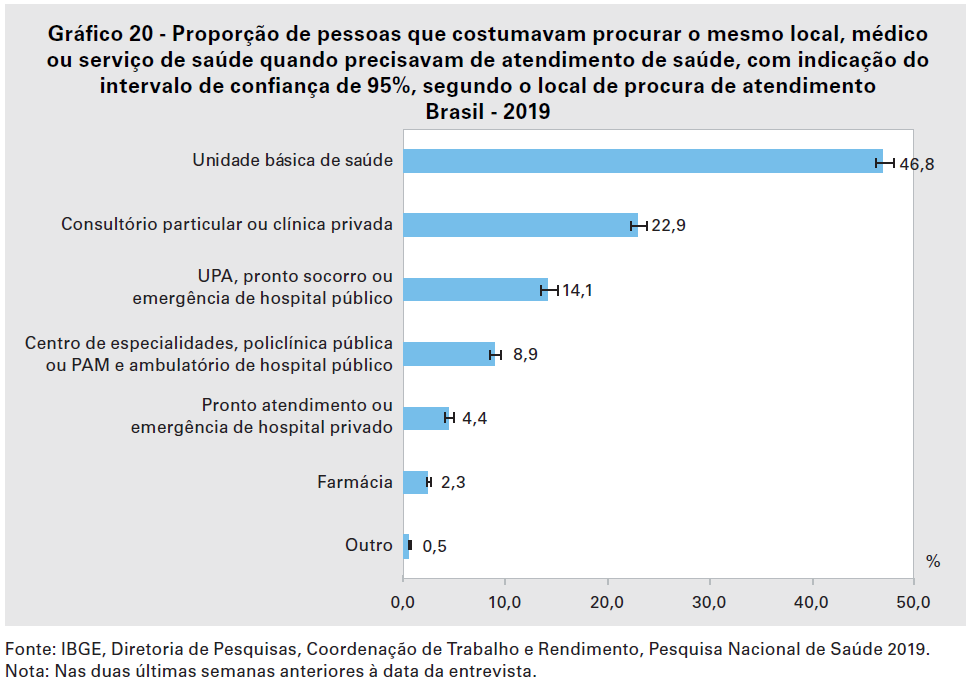 Private Offices or Private Clinics were reported by 22.9% and Emergency Care Units - UPAs, medical centers or Public Hospital emergency units, by 14.1%. Grouping the categories, nearly 70% of the population used to look for public health establishments.

The proportion of women (82.3%) who consulted a doctor was higher than that of men (69.4%). In addition, this proportion increased as the range of per capita household earnings got higher, changing from 67.6% for the class up to 1/4 minimum wages to 89.6% for that with more than five minimum wages.

Oral care still not reaches half of population

The proportion of persons who consulted a dentist in the 12-month period before the interview (49.4%) did not reach half of the population, though it rose over 2013 (44.4%). The North and Northeast registered the lowest proportions: 40.8% and 43.3%, respectively. The low percentage among persons aged 60 years and over also stood out: 34.3%.

In addition, among the persons without any compensation up to 1/4 minimum wages, 36% of them consulted a dentist, whereas in those with more than 5 minimum wages, the proportion reached 75.7% in 2019, a difference of nearly 40 p.p.

Diseases and treatment are the main reasons for care

The major reasons for it were: disease or treatment (48.2%) and routine care, such as: vaccination, prevention, medical check-up or follow up with other health professional (25.1%).

42.3% of persons with lower earnings get medicines in public service

In 2019, among the 39 million persons who looked for health care in the two-week period before the survey, 86.1% were assisted. Among those, 73.6% reported having been assisted in their first attempt, a percentage below that estimated in 2013 (95.3%).

Of the persons who achieved health care (except appointments), 60.9% had a medicine prescribed and, of them, 85% managed to obtain all the prescribed medicines. When the reference for obtaining alt least one medicine was the public service, the proportion was lower: 30.5% (or 6.2 million persons).

The lower the range of per capita earnings, the higher the proportion of persons who obtained medicines in the public service: 42.3% for the range up to 1/4 minimum wages and 7.1% for the class of more than five minimum wages.

Nearly 65% of hospitalizations were accomplished by SUS

In 2019, 6.6% of the population (13.7 million) were hospitalized for 24 hours or more in the 12-month period before the interview. Of those hospitalizations, 64.6% (or 8.9 million) were through the Unified Health System - SUS. The Northeast and North regions recorded the highest proportions: 77.8% and 76.2%, respectively, whereas the Southeast posted the lowest one (56.4%).

A more significant disparity was noticed by class of earnings: 95% for the range without any compensation up to 1/4 minimum wages and 6.8% for persons with more than 5 minimum wages.

Only 4.6% of population used a integrative and complementary practice

In 2019, 4.6% of the population used some integrative or complementary practice. In 2013, the percentage was 3.8%. Those practices comprise treatments like acupuncture, homeopathy, use of medicinal plants and phytotherapy, among others. They were pinpointed at higher proportions in the North (5.7%) and South (5.4%) regions. Medicinal plants and phytotherapy (58.0%) was the most used practice, followed by acupuncture (24.6%) and homeopathy (19.0%).

Dogs are present in 33.8 million households and cats, in 14.1 million

Percentage of households with vaccinated dogs and cats decreases

A negative change was noticed in the percentage – yet a numeric increase – of households with dogs or cats in which all the animals were vaccinated against rabies over the last 12 months: of the 39.4 million households with dogs or cats in 2019, 72.0% (28.4 million) of them had those animals vaccinated, whereas this percentage was 75.4% (24.8 million) in 2013.

While in the PNS 2013 93.7% (60.8 million) of the Brazilian households had piped water in at least one room, this figure rose to 96.7% (70.8 million) in the 2019 edition. The Southeast, Central-West and South recorded results above the national average (99.0% or more). Nevertheless, the percentages were lower in the North and Northeast regions: 91.2% and 91.1%, respectively. Except for the South, which remained statistically stable, the other regions posted an increase in the percentage of households with piped water.

In 2019, garbage collection directly through cleaning services or in garbage bins reached 91.4% of the households (67.0 million). Once again, the Southeast registered the highest percentage (97.1%) and the North, the lowest one (80.4%).