The IBGE releases, today, Legal Amazon Boundaries for 2019, based on the update of the region's Municipal Grid. The new product is available here.

The Legal Amazon was established by Law 1,806, of 06/01/1953, with the objective of defining a geopolitical delimitation aiming at policies related to territory and economic sovereignty for the development of the region.

The Legal Amazon Boundaries have been expanded due to the work of the Superintendence for Development of the Amazon (Sudam). Today, the Legal Amazon has 5,015,067.49 km², corresponding to about 58.9% of the Brazilian territory (8,510,295.914 km²) according to the latest release of the municipal grid.

The Legal Amazon Map presents state borders, municipal boundaries and positions of headquarter cities that constitute the logistical base for strategic territory control and economic exploitation.

The new map also supports the analyses of Intermediate Cities of the Legal Amazon, those with socioeconomic characteristics and connections that can consolidate and promote local and intraregional development, its flows, and road and river connections. 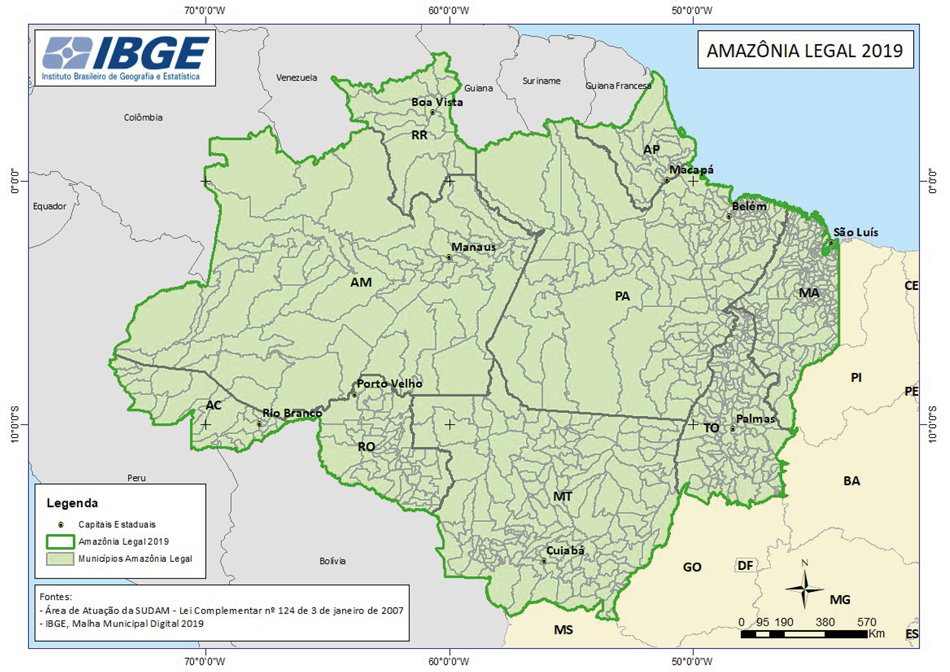 Established in 1953, by Law 1,806, the Legal Amazon encompassed the states of Pará and Amazonas, and the federal states (then) of Acre, Amapá, Guaporé and Rio Branco and, also, part of Mato Grosso, 16th parallel north, part of Goiás, 13th parallel north and part of Maranhão, 44th meridian west.

In 1966, Law 5,173 established that the region would encompass the states of Acre, Pará and Amazonas, the fedral territories of Amapá, Roraima and Rondônia and, also, the areas of Mato Grosso, 16th parallel north, of Goiás, 13th parallel north and of Maranhão, 44th meridian west. In 1977, Complementary Law 31 of 11.10.1977 integrated all the state of Mato Grosso to the Legal Amazon.