The total storage capacity available for stocking in Brazil, recorded in the first semester of 2019, was of 175.5 million tonnes, 3.5% higher than in the previous semester. Having registered 43.9 million tonnes, Mato Grosso remained the leader in stocking capacity. The stock of agricultural products added up to 63.7 million tonnes, an increase of 9.4% against the 58.3 million tonnes stocked on June 30, 2018. Soybeans (34.8 million tonnes) registered the highest volume stocked, followed by corn (18.5 million), rice (4.8 million), wheat (1.9 million) and coffee (1.1 million).

Central-West up 7.9% in amount of active establishments

The Survey of Stocks point out a 3.5% increase in total available storage capacity in Brazil for the first semester of 2019. The total was 175.5 million metric tons in active establishments in the survey.

Corn and coffee stocks up; wheat, rice and soybean stocks down

Soybean stocks accounted for the largest volume (34.8 million metric tons), followed by corn (18.5 million), rice (4.8 million), wheat (1.9 million) and coffee (1.1 million). These products constitute 95.9% of the total stock of the products monitored by this survey, and the remaining 4.1% consist of cotton, black beans, colored beans and other grains and seeds.

Number of establishments and storage capacity,
by type, by Federation Units - Brazil - 1st half of 2019 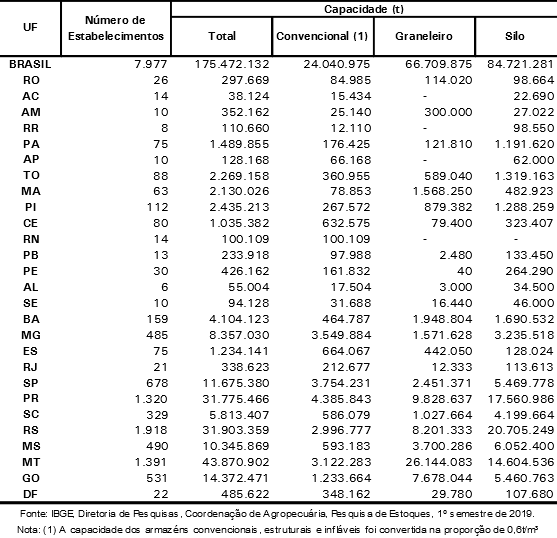