Households with earnings up to two minimum wages (R$1,908.00) committed more of its budget with food and housing expenditures than those with earnings above 25 minimum wages (R$23,850.00). Together, the two groups accounted for 61.2% of the expenditures of the households with lower earnings, being 22.0% destined to food and 39.2% to housing. Among those with higher earnings, the sum added up to 30.2%, being 7.6% with food and 22.6% with housing.

The survey also unveiled that, together, food, housing and transportation committed 72.2% of the expenses of the Brazilian households, concerning the total consumption expenditures. Taking into account the distribution of the consumption expenditures in the case of food, the proportion of total expenses of the rural condition (23.8%) surpassed that of urban (16.9%), as well as the expenditures with transportation (20% rural and 17.9% urban). Education (4.7%) was the group whose share of urban households (4.9%) doubled that reported for rural households (2.3%).

The current expenditures represented 92.7% of the total. Shares of 4.1% related to the increase of assets (acquisition of properties, refurbishment and other investments) and of 3.2% to diminish liabilities (amortization of loans and installments of real estate financing) were also recorded.

Share of expenditures to increase assets drop 1.7 p.p. in 10 years

The comparison between the National Study of Household Expenditure - ENDEF 1974-1975 with the three editions of POF pointed out a jump in the share of the current expenditures between the first and the last one, changing from 79.9% to nearly 93% in 2017-2018. Among the POF editions, however, it remained stable from 2002-2003 onwards.

The share of the expenditures to increase assets, like acquisition and refurbishment of real estate, for instance, reached 4.1% in relation to the total expenditures in POF 2017-2018. This group deeply dropped along the nearly 30 years between ENDEF and POF 2002-2003. This percentage has been showing a slighter change in the period among POFs.

On the other hand, the diminishing of liabilities posted smaller changes in the historical trend. After a steady share in 2002-2003 and 2008-2009, this percentage slightly increased in POF 2017-2018, reaching 3.2%. This percentage got close to that reported in the ENDEF period, when it represented 3.6% of the total expenditure.

Food, housing and transportation account for 72.2% of household expenditure with consumption

The share of expenditures with consumption in the total expenses was 81.0% for Brazil, with a monthly average of R$3,764.51. The average value of the expenditures with consumption by households in rural condition (R$2,158.83) corresponded to 57.3% of the national average and to 53.7% of the average expense of the households in urban condition (R$4,020.98).

The expenditures with food, housing and transportation corresponded to 72.2% of the monthly average expenditure with consumption, which represented 58.4% of the total expenses.

The third biggest share in the national expenses with consumption was the group of food (17.5%), a result very close to transportation (difference of 0.6% p.p.). This picture was repeated in the urban condition, in which the share of transportation (17.9%) surpassed that of food by 1.0 percentage point. In the rural condition, the proportion of the expenses with food (23.8%) was higher than those of transportation (20.0%). The Northeast (22.0%) and North (21.0%) regions registered bigger shares than the national average. The Southeast Region recorded the lowest percentage for this group(15.8%).

Education (4.7%) was the group that registered the most relevant difference among the shares in the urban (4.9%) and rural (2.3%) conditions.

Food represents 22.0% of expenses of households earning up to 2 minimum wages

Health assistance registered close percentages in the domestic budget, but when the households with lower earnings committed 4.2% of the budget with medicines, those with higher earnings spent 1.4%. Conversely, the expenses with health plans were 0.4% in the lowest class of earnings and 2.9% in the upper class.

Expenses with health increase in all surveys since 1974

The group of food dropped 2.3 p.p. between the two last editions of POF, changing from 19.8% to 17.5%. Housing, education and health assistance increased in relation to 2008-2009, the last one rising in all editions of the survey.

Expenditure with food away from home increases 11 p.p. in rural area

The Central-West Region registered the highest value of the household monthly average with food away from home (R$277.68). This value was 133.8% bigger than that in the North Region (R$118.79), the lowest one in Brazil.

Meat, offal and fish are 20% of expenditures with food at home

The average value received by households, related to the monthly earnings and asset variation (for instance, withdrawals from savings and sale of real estate), reached R$5,426.70 in 2018. It was R$5,806.24 in urban areas, while it was R$3,050.49 in rural areas. In other words, households in rural condition received slightly more than half (52.3%) of the value received in urban areas.

The second biggest share came from cash transfers (19.5%). Among the cash transfers, the INSS retirements and pensions represented 55.0% and the federal social programs, 5.4%. In the urban areas, the transfers represented 19.0% of the total received, whereas they represented 25.3% in the rural areas. 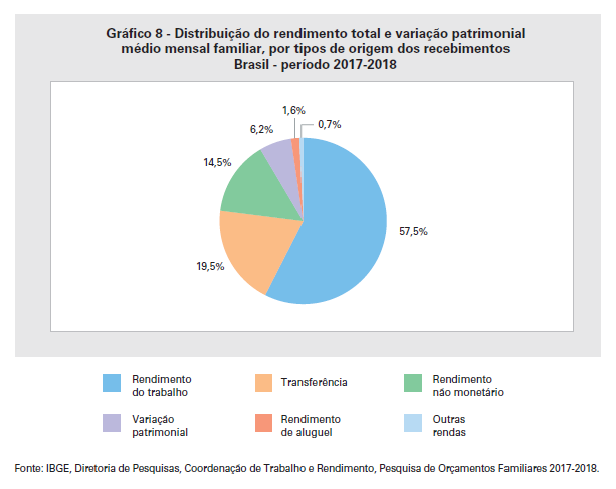 In all regions, earnings from labor represent more than half the values received

The Southeast was the region with the biggest contribution to the total average value received by households (R$2,789.94), more than half of the national average (51.4%). The smallest contribution was given by the North Region (R$265.09 or 4.9%). Regardless of showing the highest value among the regions, the Central-West participated with only R$525.44 (9.7%).

Only 2.7% of households hijack 20% of overall average in Brazil

The analysis of the source of the values received by range of earnings in the households that received up to 2 minimum wages showed that 41% came from earnings from labor; 28.8%, from cash transfers; 0.3%, from rentals; 0.6%, from other sources; 28.2% were non-monetary and 1.1% was due to asset variation.