The Annual Survey of Industry (PIA) Enterprise revealed that, between 2014 and 2017, the enterprises of the sector lost nearly 12.5% of their job vacancies, representing 1.104 million less employed persons in the sector.

Considering the changes since 2008, the Brazilian Industry kept its participation in employed persons practically unchanged in the period. The manufacturing industry still leads, with 97.5% of the employed persons in 2017. The sector with the greatest representativeness in jobs was Manufacture of food products (23.3%).

The eight industries with the highest values in the industrial manufacturing values (VTI) concentrated 21.1% of those values in 2017. In Mining and quarrying industries, the eight leaders concentrated 71.4% of the VTI whereas in the Manufacturing Industries, the joint participation of the eight biggest enterprises was of 19.2%. The support material of 2017 PIA Enterprise is on the right.

The Annual Survey of Industry located 318,300 active industrial enterprises with 1 or more workers in 2017, which employed 7.7 million persons and paid R $ 300.4 billion in salaries. Their net sales revenue (NSR) was R $ 3.0 trillion.

The industrial activity generated R$1.2 trillion of industrial manufacturing value (VTI), resulting from the difference between a gross industrial production of R$2.7 trillion and industrial operational costs (IOC) of R$1.5 trillion. Manufacturing Industries contributed  with 91.3% to the VTI.

Large industrial enterprises, employing 500 or more people, kept accounting for almost 70% of total industry NSR. There were no significant structural changes in the other categories.

Between 2008 and 2017, food increase their participation in the industry

The analysis of the results of the NSR, from the sectorial point of view, shows that the Manufacture of food products increased its relevance in the last ten years, going from 16.1% to 22.9% of participation, remaining as the most important activity in sales. The second place is occupied by the Manufacture of chemical products, that even having lost 0.1 pp in the participation of the result went from the fourth to the second position in the ranking of the period.

The third and fourth most relevant activities, on the contrary, had a reduction of participation: Manufacturing of coke, petroleum products and biofuels lost 1.8 pp, covering 9.4% of total NSR in 2017, and Manufacture of motor vehicles, trailers and bodies declined 2.8 pp, and was responsible for 8.9% of participation in the last year. The Basic Metal sector also lost its share (-2.0 pp) in the analyzed period.

Between 2014 and 2017, the industry dropped by 12.5% the number of employed persons, which is equivalent to 1,104 million fewer jobs in the sector. In the same period, in the mining and quarrying industries, the drop was 15.6%, while in the manufacturing industries, 12.5% of jobs were lost. 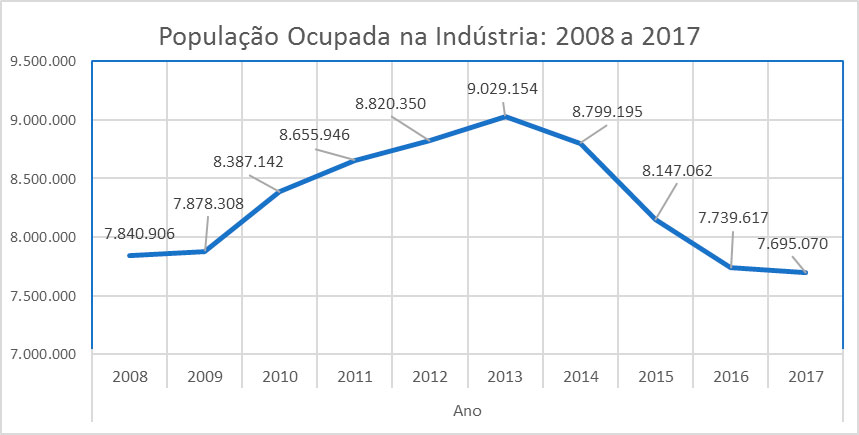 In comparison to 2008, Brazilian industry lost 145.8 thousand jobs in 2017, which represents 1.9% of the total number of employed persons in the sector in 2008. This was especially true in Manufacturing Industries, with decrease of 2.4% in employed personnel in the period, while Mining and Quarrying Industries grew 22.1%.

In 2017, each Brazilian industrial enterprise employed an average of 24 people, with a monthly average wage of 3.2 minimum wages (mw). The Manufacture of coke, petroleum products and biofuels registered the highest average in the Manufacturing industries: 569 persons in each company with an average salary of 8.8 mw. In Mininga and Quarrying, the activity of Extraction of petroleum and natural gas paid the highest average monthly salary (21.3 mw). The Manufacture of pharmaceutical and pharmochemical products (7.1 s.m.) and the Manufacture of other transportation equipment, except motor vehicles (5.4 mw) are also highlights.

As to productivity in industrial enterprises, calculated as the ratio between the VTI and the employed personnel in the enterprise, in 2017 each worker added about R$106,500 to the production. The productivity of the mining and quarrying segment (R$381,100) was about four times greater than that of the Manufacturing Industries (R$99,500).

The eight largest industries generate 22.1% of the value of industrial manufacturing

The degree of concentration may indicate the existence of barriers to entry of new enterprises. There was a slight decrease in the concentration of total industry, according to the "order 8 concentration ratio" (R8). The eight industries with the highest values of industrial processing accounted for 22.8% of this value in 2008, dropping to 21.1% in 2017.

In Mining and Quarrying Industries, this indicator was 71.4%, highlighting the high concentration of production in the Extraction of coal, which between 2008 and 2017 moved from third to first in the ranking. This activity accounted for 95.5% of all production in the set of 8 enterprises in 2017.

Considering the Value of Industrial Manufacturing of industrial enterprises for local branches with 5 or more persons employed, it is possible to verify which activities stand out. Between 2008 and 2017, the Mining and Quarrying Industries increased their importance, going from 9.9% to 13.5% of participation in the VTI. Transformation Industries maintained their predominance, although their share fell from 90.1% to 86.5%.

Among the Mining and Quarrying Industries, the activities that led the ranking over the last ten years were Extraction of petroleum and natural gas (49.9%) and Extraction of metallic minerals (39.1%).

In Manufacturing Industries, food manufacturing was the most important sector, accounting for 20.7% of the VTI among local branches, increasing its share by 7.2 pp over the last ten years. In the second position is the Manufacture of coke, petroleum products and biofuels, with 11.4% of participation in the VTI.

This productive shift towards the Central-West was mainly due to the migration of agroindustrial plants that were dedicated to the Manufacture of food products and began to participate in the production of biofuels, making this activity become one of the three most relevant of the region.