GDP of Municipalities 2016: Semi-arid region accounts for 5.1% of the country's GDP

Between 2002 and 2016, the contribution of semi-arid municipalities to GDP increased from 4.5% to 5.1%, and that of municipalities in the Legal Amazon did from 6.9% to 8.6%. That is the first time the IBGE includes in the survey a geographic analysys. That allows observtion from different approaches and the analysis of economic nteractions. The several maps in the study are available at the IBGE Interactive Geography Platform.

In 2016, among the 5,570 municipalities in the country, the predominantly urban 1,456 account for 87.5% of the Brazilian GDP. In the Southeast Region, the 625 municipalities with this characteristic accounted for half of the national GDP.

Osasco, the only municipality that is mot a capital, among those with the biggest contributions to the national GDP, went from thr 16th to the sixth position in the ranking between 2002 and 2016, mainly due to the activities of trade, information services and financial activities.

The biggest increases of contribution to GDP between 2015 and 2016 came from Ouro and Tabocas do Brejo Velho, both located in Bahia. The former due to the construction of a wind energy plant, and the latter, due to the generation of solar energy.

Five of the ten biggest per capita GDP figures came from municipalities in the state of São Paulo.

The complete publication and the support material for the GDP of Municipalities 2016 can be found on the right of the page.

Among the six municipalities with the biggest contribution to the national GDP — São Paulo (SP), with 11.0%, Rio de Janeiro (RJ) with 5.3%, Brasília (DF) with 3.8%, Belo Horizonte (MG) with 1.4%, Curitiba (PR) with 1.3% and Osasco (SP) with 1.2% — only Osasco changed its position throughout the time series, having moved from the 16ª position (2002) to the sixth position (2016). The activities that contributed the most to that increase were trade, informations ervices and financial activities. As a result, the municipality surpassed Porto Alegre and Manaus, which were in the sixth and seventh positions, respectively, in 2015.

Except for capital municipalities, the one hundre biggest municipal GDPs also reduced their contribution to the national GDP, in the period considered, from 27.1% to 26.4%. However, in the South and Southeast the municipalities reduced participation in the Major Region overall, whereas in the others, there was increase in participation. The North, which, in 2002, did not have any representative among the highest GDPs, had one municipality in 2016: Parauapebas (PA), with 0.2% of the Brazilian GDP.

Capital municiplities, in 2016, were responsible for about 1/3 of the national GDP. Whereas São Paulo (SP), with 11.0%, was in the first position in terms  of contribution to GDP in the country, Palmas (TO) was in the last position (0.1%).

In the comparison between 2002 and 2016, in all the Major Regions the number of municipalities which represented up to ¼ of the economy w increased, except in the Southeast, where the municipality of São Paulo (SP) was in this range, in spite of having reduced its contribution from 22.1%, in 2002, to 20.6%, in 2016.

Sustainable energy and silviculture benefit four municipalities between 2015 and 2016

The biggest and smallest advances in the relative share of matinal GDP came from municipalities with little participation in the national GDP, usually 0.0%, which were above the 2,200th position in the country’s GDP.

The municipality of Gentio do Ouro (BA) presented the biggest advance (from the 4,496th, in 2015, to the 2,491st position, in 2016), due to the industry of machinery and equipment for construction of a wind energy plant. Tabocas do Brejo Velho (BA), in the second position in the same comparison, went from the 3,986th to the 2,432nd position, mainly due to the increase of taxes collected due to imports of equipment for the generation of solar power. In the third and fourth position, the municipalities of Olhos d’Água and Estrela do Sul had gains related to silviculture.

In 2002, the municipalities of São Paulo (SP) and Rio de Janeiro (RJ) accounted for 19.0% of the Brazilian GDP and, in 2016, for 16.2%. The decrease in participation was distributed between the activities of industry and services. Then, the biggest decreases in participation were 0.5 percentage points in Campos dos Goytacazes (RJ) and of -0.3 percentage points in São Bernardo do Campo (SP) and São José dos Campos (SP).

Public administration prevails in the economy of 55.0% of the municipalities

The main economic activity in 55.0% of the Brazilian municipalities, or in 3,062 municipalities, was Administration, defense, public education and health and social security. More than 90.0% of the muncipalities of Roraima, Paraíba, Piauí, Sergipe, Amapá and Rio Grande do Norte had this profile. The states in the South Region, on the other hand, about 11.0% of the municipalities had that characteristic.

Besides public administration, Agriculture was predominant in 57.6% of the municipalities (3,209). In 25.4% (1,416), the activity accounting for the biggest contribution was Trade and repair of motor vehicles and motorcycles or Other services. In 945 municipalities, 17.0% of the total, one of the industrial activities was the most significant one. In comparison with 2002, 71.8% of the municipalities kept their economic profiles.

Geographic analysis shows a dynamic concentration of GDP of municipalities 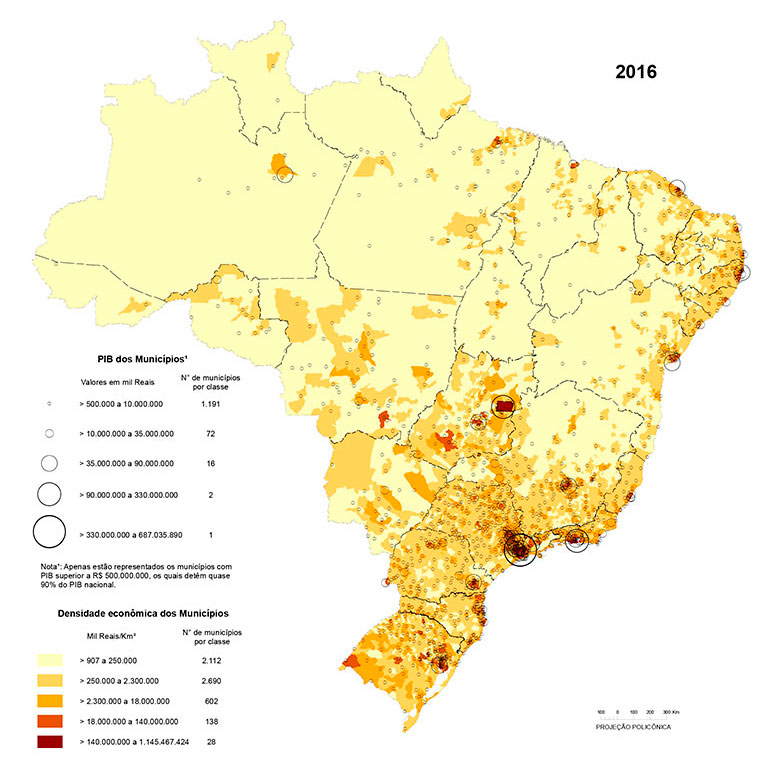 In the City-Region of São Paulo, 140 municipalities account for 26.0% of the GDP

The so-called City-Region of São Paulo – the almost entirely continuous urbanization area that stretches from Santos to Piracicaba, and from Sorocaba to Pindamonhangaba, and gathers 140 municipalities interconnected and led by the municipality of São Paulo – concentrated, in 2016, 26.0% of the GDP in the country, versus 28.2% in 2002. On average, a square kilometer of the territory in the City-Region of São Paulo produced 68 times more than a square kilometer in the rest of Brazil.

The Legal Amazon (which encompasses the states of Acre, Amapá, Amazonas, Mato Grosso, Pará, Rondônia, Roraima and Tocantins, and also part of Maranhão) and the Semi-arid Region (formed by 1,262 municipalities in the states of Maranhão, Piauí, Ceará, Rio Grande do Norte, Paraíba, Pernambuco, Alagoas, Sergipe, Bahia and Minas Gerais) increased their participation in the national GDP. Between 2002 and 2016, the semi-arid region went from 4.5% to 5.1%, and the Legal Amazon, from 6.9%, in 2002, to 8.6%. It is worth mentioning that the figures from the Legal Amazon refer to diverse economic activities such as agribusiness in Mato Grosso, manufacturing industry in the Manaus Free Trade Zone, mining and quarrying industry and livestock in Pará.

In 2002, the Legal Amazon accounted for 14.8% of national Agriculture, and reached 21.0% in 2016. In the services sector (except public administration), the participation of that region increased from 5.5% to 6.6% in the period. In this last activity, the Semi-arid also recorded an increase in participation, from 3.2% to 4.1%.

Metropolises concentrated wealth, but reduced contribution to GDP between 2002 and 2016

When municipal GDP is analyzed from the perspective of urban hierarchy, it is possible to observe that the lower the position, the bigger the wealth. In the group of 12 Brazilian metropolises (177 municipalities) GDP per capita was, in 2002, 2.6 times bigget than in the group of local centers (4.479 small municipalities). That difference fell to 2.2 times in 2016. The participation of metropolises in the Brazilian GDP fell from 47.3%, in 2002, to 44.6%, in 2016, whereas in local centers figures rose from 15.8% to 17.1%.