In September, IBGE forecasts harvest 6% smaller than in 2017

Among the Federation Units, Mato Grosso was the leader as the main national producer of grains, with a share of 26.9%, followed by Paraná (15.7%) and Rio Grande do Sul (14.8%), which, together, represented 57.4% of the national overall. The support material of the LSPA is on the right side of this page. 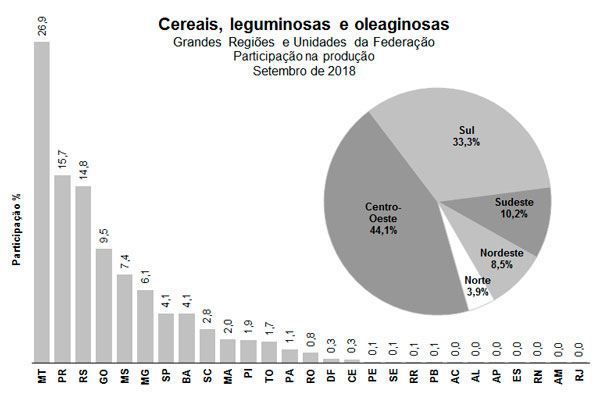 September´s estimate in relation to August 2018

SUGARCANE - The Brazilian production was estimated at 672.9 million tonnes, representing a decrease of 2.0% over August. As the biggest producer and processor in Brazil, São Paulo had its share estimated at 53.3% of the total to be harvested, which represented declines of 3.4% in the output and of 3.8% in the area to be harvested. A drop of 2.2% in the production was estimated in relation to 2017. Drought influenced the drop in the productivity by 2.5%. The lack of investment in the crops and the rise of the production costs have limited the output and supply of sugarcane to the plants. The oversupply of sugar in the foreign market, due to the good harvest in India, took the plants to channel more sugarcane for the production of alcohol, which had also its prices reduced due to the oversupply during the harvest season.

WINTER CEREALS (grain) - Due to the retraction of 2.1% in the average yield, the estimated production of wheat was of 5.9 million tonnes, 0.5% smaller than the previous month. As the major Brazilian producer, Paraná estimated an output of 3.0 million tonnes (51.2% of the national production). The output and average yield fell 4.1% and 5.5%, respectively, over August, due to the lack of rainfall. As the second major Brazilian producer, Rio Grande do SUl estimated an output of 2.1 million tonnes (35.4% of the national production). Not so compelling prices, low liquidity and climate problems have been affecting the production of wheat in Brazil. Nevertheless, the estimated output for 2018 was 37.9% higher than the 2017 harvest, a season in which the adverse climate jeopardized the production in Rio Grande do Sul and Paraná. The production estimate of oat was of 940.1 thousand tonnes, representing an increase of 5.7% in relation to the previous month. The area to be harvested increased 7.5%, having reached 420.1 thousand hectares. Concerning barley, the production was estimated at 385 thousand tonnes, a decrease of 1.9% over the previous year.

The estimate of the output of the third crop of beans was of 469.1 thousand tonnes (-8.4% smaller than in August). In São Paulo, the output retreated 37.0% and the area to be harvested and average yield fell 33.8% and 4.7%, respectively. Prices not so rewarding due to the productions costs have been discouraging the producers to plant during this season.

Having produced 26.3 million tonnes, the first crophad already been harvested, representing an increase of 1.4%, due to the increasing rise in São Paulo (16.4% or 373,948 t). The harvested area and average yield in São Paulo were revised with rises of 12.0% and 4.0%, respectively. Rio Grande do Sul also reported a growth in the production estimate of corn - 1st crop: 0.8% or 38,370 tonnes. The output of corn - 1st crop was 15.3% smaller than in 2017. Prices not so rewarding during the planting season influenced the producers to improve the areas destined to soybeans rather than corn.

A good number of Federation Units delayed the planting of corn - 2nd crop, due to the delay in harvesting the summer harvest and to rainfall, which hampered machinery traffic, mostly in the Center-South of Brazil. The output was estimated at 54.7 million tonnes in 11.4 million hectares. In site of the increase of 0.3% in the average yield, the production retracted 0.6% over August. The negative adjustments were mostly influenced by São Paulo (19.0% or 461,300 t), Sergipe (65.2% or 322,992 t) and Alagoas (18.9% or 7,568 t). Mato Grosso registered an increase in the production estimate (2.4%), average yield (1.7%) and harvested area (0.7%). Producing 25.9 million tonnes, Mato Grosso accounted for 47.3% of the total corn harvested in this season in Brazil. The output of the second crop was 20.1% smaller than in 2017, due to the delay in planting the summer season and the resulting risk of droughts. Furthermore, the production of corn was a record in several states in 2017.

SOYBEANS (grain) - The Brazilian production of soybeans in the 2018 harvest was one more record in the IBGE´s time series. As a whole, Brazil harvested 117.3 million tonnes, an increase of 2.0% over the previous year. Despite the late rainfall, only the South Region reduced its output (4.5%). In the Central-West and Southeast Regions and in “Matopiba” (Maranhão, Tocantins, Piauí and Bahia), rainfall favored the crops.

September estimate in relation to the production of 2017

Of the 26 products surveyed, the output of 13 of them recorded a positive change over 2017:

The surveys relative to cereals (rice, corn, oat, rye, barley, sorghum, wheat and triticale), legumes (peanuts and beans) and oilseeds (cotton seed, castor beans, soybeans and sunflower) have been conducted in close partnership with the National Supply Agency of the Ministry of Agriculture (CONAB), a subdivision of the Ministry of Agriculture, Livestock and Supply (MAPA). That initiative is the result of a process (started in March 2007) of harmonization of official harvest estimates for the main Brazilian crops.