Since Monday (10), the IBGE is enrolling for another selection process of the 2022 Population Census. 180 temporary positions for census agent of surveys by telephone and 12 positions for census supervisor of surveys and coding are being offered. The opportunities are for the municipality of Rio de Janeiro. Enrollment is open up to February 2 on the National Institute for Education, Cultural and Assistance Development (Idecan) website.

For the position of census agent of surveys by telephone, candidates should have completed secondary education and should have one year of experience in either active or receptive telemarketing over the last five years. The salary is R$998.00 for 4:30 daily hours, adding up to 27 weekly hours, split into three shifts, including weekends and holidays. Enrollment rate is R$20.

“The census agent of surveys by telephone will answer calls from users to support the filling of the Census questionnaire through the Internet. During the data collection, residents will choose from answering the enumerator face-to-face, through telephone or filling the questionnaire through the Internet. The agent of surveys by telephone will also call the households in order to check potential problems that lead informants to give it up, thus encouraging the filling of the questionnaire,” explains Bruno Malheiros, IBGE´s coordinator of Human Resources.

To apply for the positions of census supervisor of surveys and coding, the candidates should have completed higher education in any area. Enrollment rate is R$41 and the salary is R$4,200 for 40 weekly hours, which may include weekends and holidays, being eight daily hours between 8 AM and 9:30 PM, according to the management.

The census supervisor of surveys and coding works in training, distribution of tasks and supervision of the work of census agents of surveys by telephone and encoders, among other assignments.

The candidates for both positions will be selected through a test including 60 multiple-choice questions, applied on March 20 in the municipality of Rio de Janeiro. The tests will be applied on-site according to the health protocols against Covid-19 described in the public notice. Candidates who do not follow the protection measures will be eliminated from the selection process.

The test for census agents of surveys by telephone will include contents of Portuguese, Logical Thinking, Ethics in Public Service and General Knowledge. The candidates for census supervisor of surveys and coding will answer questions of Portuguese, Notions of Administration and Managerial Situations, Notions of Information Technology, Ethics in Public Service and Specific Knowledge. The release of the final result is scheduled for April 25.

The contract for census agents of surveys by telephone will last up to five months and that for census supervisors of surveys and coding, up to 16 months. Both of them can be extended, according to the IBGE needs and availability of budget resources. This recruitment is regulated by Law no. 8,745/1993.

Every selection process for the 2022 Census allows the exemption of the enrollment rate by persons enrolled in the Single Register for Social Programs of the Federal Government (CadÚnico) and donors of bone marrow. After the request is sent, it will be assessed by Idecan.

Other selection processes of the Census

The salaries are R$1,700 for ACAI and R$3,677.27 for CCA, with 40 weekly hours. Both positions require complete secondary education. For CCAs, a valid driver´s license, either definitive or temporary, at least in the B category is required.

Selection for enumerators and census agents finishes on January 21

Candidates for the position of enumerator should have completed primary education. The professionals earn according to their production. Click here to simulate the compensation. The IBGE enumerators will collect information in more than 70 million Brazilian households. 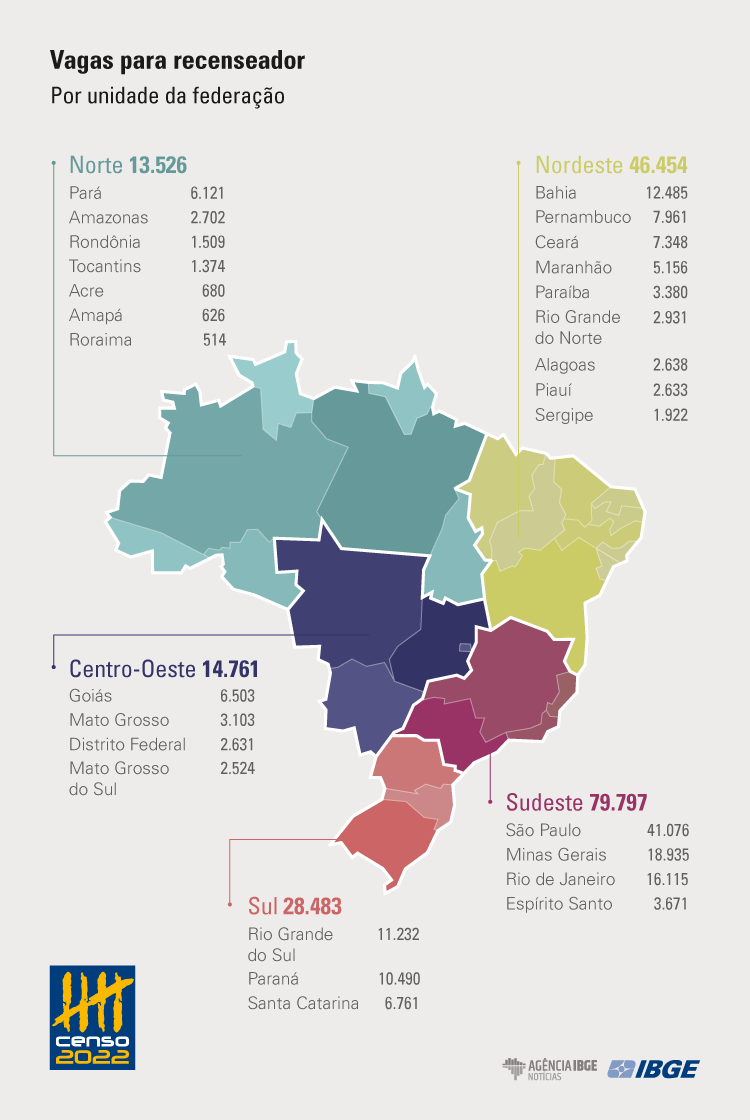 ACSs and ACMs should have completed secondary education. The salaries are R$1,700 and R$2,100, respectively. ACMs manage the work in data collection stations, whereas ACSs, subordinate to the ACMs, have as major role guiding the enumerators during the field work. 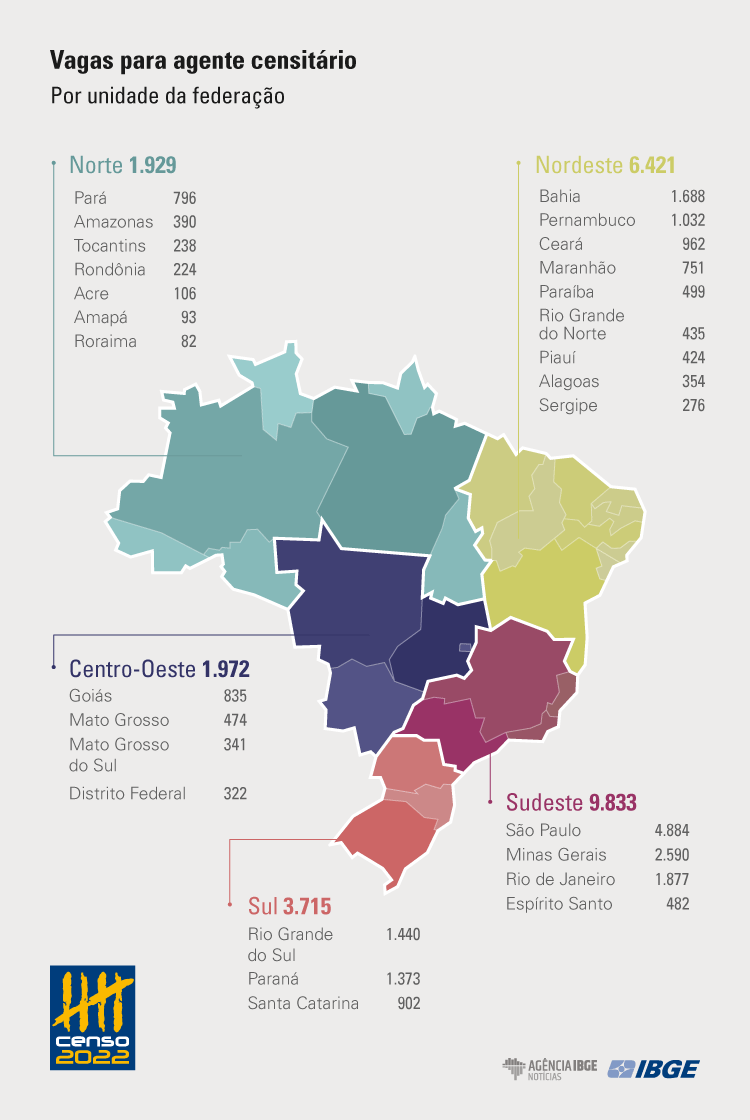 Enrollment rate for enumerators is R$57.50 and R$60.50 for census agents. It can be paid up to February 16. With the extension of the deadlines, tests were postponed from March 27 to April 10. Candidates can apply for both selection processes, since the tests for enumerators will be carried out in the morning and those for census agents, in the afternoon.

The enrollments for the selection processes of 2020 and 2021 will not be valid for the 2022 Census. Reimbursement for cancelled processes can be made clicking here.

IBGE will visit more than 70 million households in 2022

In 2022, nearly 213 million inhabitants, in more than 70 million households, will be visited by enumerators in the 5,570 Brazilian municipalities. The Census will unveil the characteristics of households, ethnic-racial identification, nuptiality, family core, fertility, religion or cult, disability, internal or international migration, education, commuting for study, labor and income, commuting for work, mortality and autism. Carried out every ten years, the survey is the major source of reference for the knowledge of life conditions of the population in all the Brazilian municipalities.